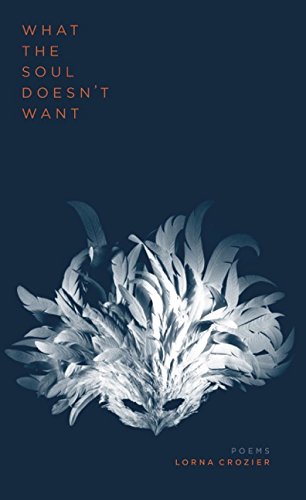 This is how it is with the pros.  Magic on every page.  Lorna Crozier's What The Soul Doesn't Want could easily become your "go to" book of poems.  Today's book of poetry is convinced that if he threw darts at a board covered with Crozier poems every one would come up bull's-eye.

Okay, every poem in this collection may not eventually reside with the immortals but this lady is certainly making a stiff case.  Wit, wisdom, strength and compassion as hard as a frozen snow drift, soft of the sound of Glen Gould humming.

What The Soul Doesn't Want

Not a plastic bucket. Not a logging truck.
Not homemade wine wrung from turnips.
Not a fox with rabies.

The soul might accept a rat mother
an eel basket woven from wicker, a leather collar
that reeks of goat.

Not a gas station with the lights shot out.
Not gravity.
Not a mask that keep the body

breathing. The soul doesn't want
another face,
not even the face of a snowy owl.

Crozier's poems about grief and aging are bittersweet truths and we can feel the sad ghosts that tremble in the shadows.  But What The Soul Doesn't Want also harbors hope in her deep recesses and entreaties.  Crozier's treatise, disguised as poem, on cockroaches is so splendid that we couldn't leave it be.  It's up next.

Crozier makes pies with Sylvia Plath, reads W.S. Merwin, worries about Dante's first lines and so on.  It is a merriment of riches.  When in the room with a sage, you listen.

What The Soul Doesn't Want is a complete tonic, pure as blue sky, honest as a child's prayer.  Lorna Crozier reminds us all of just how strong a voice it takes to make this beautiful noise.  We here at Today's book of poetry are enchanted.

Phylum Arthropoda, order Blattaria.
Of its over four thousand species,
the common one
that scuttles through your sleep
and leaves greasy tracks
across the pillow slip,
Linnaeus named the German.

In Germany the same insect
is called the Russian,
in Russia, the Polish.

Old Southerners who remain
genteel and sweetly
euphemistic, say Palmetto bug
though it's a cockroach just the same.

Long before there were humans
they mated, tail to tail, in rain
pooled in the fresh tracks
of a Brontosaurus.

"Why are cockroaches attracted to me?"
a woman asks on the insect help line.
They fall upon her
in the shower, hop into her lap
from the luggage racks of trains and buses,
tumble from trees, from the wings
of low-flying birds. Though they bother
no one else in the house,
they creep from the baseboards,
climb the couch and burrow in her hair.

The entomologist whose sobriquet
on radio is Dr. Bug
suggests she might exude a pheromone
the antennae of the males pick up.

A week later she's back with
"Do they like to be touched?"
Can they be happy? Lonely? Can they feel
grief?" The scientist is gobsmacked.
Most callers ask for poisons,
they go on and on--
ugliness and dirt, scum and sewer pipes, the fetid
stench when you stomp them flat.
Off the air he says, "Let's meet for coffee."

When he sees her at the door of the cafe
he thinks of Garcia Marquez's postman
whose head, wherever he went, was haloed
by blue butterflies. As she sits
he sees a cockroach leap onto the table
from the busboy's cart as it rolls past,
and something crawls toward her
beneath the immaculate white cloth.
"Yes," he says, with the slowness and
deliberation of one who lives bookishly
alone, "yes, they like to be touched."

For a sucrose reward in the lab
they can be taught
to salivate to a bell and a waft of mint.
Crushed, then applied to a wound
they ease the sting. They account
for twenty percent of the world's
methane emissions.  Every
fifteen minutes or so
they fart.

Roach-O-Rama: mini rubber
wall-walking cockroaches,
$2.99 for a pack of three.
Place them on a fridge door
and they'll creep down
in an alarmingly real fashion.
Take them to a dinner party.
Watch the hostess's reaction!
Warning: choking hazard.
Not for children under four.

Cockroach comes from the Spanish
la cucaracha.
In Japanese it's gokiburi,
in Mongolian joom,
in Swedish kackerlacka.
People who keep them as pets
name them Jerome, Thelma,
Petunia, Orville, Stu.

If the common cockroach has a song
the human ear can't hear it,
but when aggressive or aroused
the males hiss, a sound like air escaping
from the smallest tire or the fizz
of soda in a can. Sometimes at night
you think you catch a snatch of music
but Issa sets you right.

Franz Kafka found his body
so repulsive
that his character Gregor Samsa
woke to find himself "changed in his bed
into a monstrous vermin."
His skin had thickened in the night
into overlapping armoured plates,
a putrid brown. Skinny legs waving
helplessly in the air, he struggled
to roll from his back to his side
to get up. Half awake, you make yourself
turn over every morning before you dare
to open your eyes.

Nadezhda, the cockroach
the Russians blasted into space,
gave birth in the rocket. Unlike
the Sputnik dog who died
orbiting the earth, painfully
alone, She Hopes (that's
what Nadezhda means)
and her thirty-three babies
came home alive.

Because their ganglia
run from head to tail, it's said
cockroaches think in their periphery.

You try to stream your brain
down your body
so your feet debate with Plato,
so your liver memorizes
Christopher Smart's Jubilate Agno
and recites it to the spleen.

Roaches love to snack on bed lice,
toothpaste trapped in brushes,
nylon stockings, hair balls, spit.
They lick the glue from the back
of wallpaper and postage stamps,
eat the skin they shed. During
the eight hours it takes
for their outer layer to grow back,
they like to skitter between the covers
of a book, eat the binding paste,
preferably in a first edition,
preferably Proust.
A grain of sugar, the word madeleine,
can feed one for a month.

Cockroaches can hold their breath
for forty minutes, live for seven days
without a head. They may not
survive a nuclear blast
but they can endure fifteen times
the dose that will kill you or me.

Their ontology is simple:
they never think of
not to be.

Today's morning read was a marathon of Crozier.  Milo, our head tech, went to the stacks and brought back seven of Crozier's previous poetry titles.  Everyone in the room took a book and took a turn.  After we danced What The Soul Doesn't Want around the room we did a few encores from:

Today's book of poetry wrote about Lorna Crozier's Before the First Word back in February of 2015 and you can read that here:

What is most clear to us here at Today's book of poetry is that Crozier is a sanctified member of the highest order.  We have an abundance of great women poets in Canada: Susan Musgrave, Sue Goyette, Nora Gould and Lynn Crosbie come to mind but they are a few of a long list.  But somewhere near the top of that excellent tower you'll find names like Margaret Atwood, P.K. Page, Phyllis Webb, Gwendolyn MacEwen and of course, Lorna Crozier.

What The Soul Wants 2

The electric in eel. One rib from any kind
of whale. A moon snail's thick grey neck.
Garlic scraps. A dear companion. A shrink's
blue tongue. Think of all the blue things
it could say.

ABOUT THE AUTHOR
Lorna Crozier, an Officer of the Order of Canada, is the author of sixteen previous books of poetry, most recently The Wrong Cat and The Wild in You. She is also the author of The Book of Marvels: A Compendium of Ordinary Things and the memoir Small Beneath the Sky. She is a Professor Emerita at the University of Victoria, has been awarded the Governor General’s Award for Poetry, and is a three-time recipient of the Pat Lowther Award. Born in Swift Current, she now lives on Vancouver Island with writer Patrick Lane and two fine cats.

BLURBS
“This collection explores the process of aging, of dying, of wondering about time, and questions of what has and has not yet been… wry and wrought with wit and self-knowing.”
— Saltern Magazine, July 21, 2017.

“Her newest collection focuses on the universal truths of life, change, and loss, all through a deeply human lens… Everything exists at once — the underworld of Greek mythology and a Model T car; a Goodwill store and King Lear — time is fluid and haunting.”
— The Martlet, June 8, 2017.

“[A] late-career highlight… [Crozier] can speak for the inanimate with whimsy and empathy, knows when and how to conjure sensuality, and can sneak in an emotional payload.”
— Quill and Quire, April 2017.

We here at TBOP are technically deficient and rely on our bashful Milo to fix everything.  We received notice from Google that we were using "cookies"
and that for our readers in Europe there had to be notification of the use of those "cookies.  Please be aware that TBOP may employ the use of some "cookies" (whatever they are) and you should take that into consideration.
Posted by Today's book of poetry at 8:27 AM