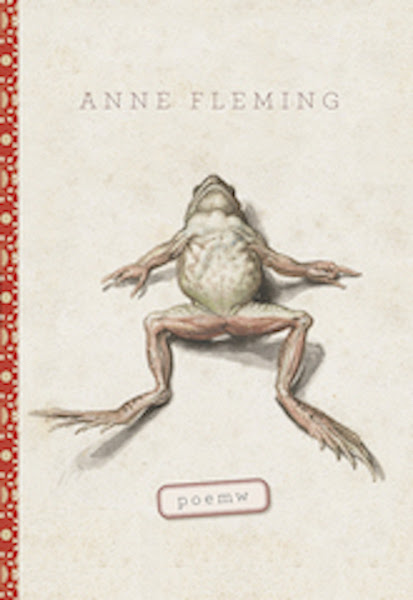 What bright and pensive, do not read ponderous, poetry is this?  Anne Fleming has a stand-up comics sense of timing attached to an impassioned heart.  poemw is a curious example, a delicate balance and a precarious perch but somehow Fleming has just the right amount of pizazz in each and every poem.  That delicate balance shouldn't imply that there is anything delicate about these poems, this work is rock solid.

You'll find the poetry in poemw to be witty but never that over the top "look what I can do" clever.  Fleming is less concerned with tricks or amusements, these deceptively tight poems have focus and direction.  Today's book of poetry was entirely on board after the first poem, the second poem confirmed our delighted perception that we were in high cotton, we had stumbled upon something grand.

Wasps crawl in everywhere and
it is not just us
all the neighbours have them and
and rats, too.

I saw an eagle carry a rat last week.
Crows flew after it.
I thought the rat-tail was a shoelace. Why
is that eagle carrying a --
Oh.
In the up and down of the wingbeats
the heavy little rope of a tail
danced.

These poems are like comfort food, they make you feel at home.  Fleming writes poetry that brims with the confidence of an old pro.  She never has to look at her feet when skating.

Somehow clever has attained an almost pejorative flavour but I'm going to crawl out on a limb and tell you that Anne Fleming is whip-smart clever.  When she uses anthropomorphism for crows at a funeral you want to wear black.

Today's book of poetry has nothing but admiration for this sort of smart.

There it was at the beach
its writhe s
its sculling hands
its syncopated surges:
my mother's walk.

younger stouter
but with the same swing of happiness
or optimism. I am walking with my wife
What's the problem?

I can barely make it out.
The walk elides her, this woman
I don't know. The woman I did know
is gone.

Anne Fleming's ode to bicycles is a marvel, it is simply called "Bikes" and it works like a charm.  Proof that when a poet casts their poet eyes on a subject, an object or an idea -- it is all fecund food for thought under the right pen, under the right circumstances.

Our morning read was one of our best in a while.  I'd told the minions that Fleming was something sharp and when they got hold of the poems they cut the rug something serious.  Reading these poems out loud makes you sound smart.

"I had my hair washed to-night. We had a lovely wood
fire to dry it that crackled and sparked most beautifully."
- Patsy Murdoch, Saturday, September 11, 1943

In my mother's day, if your hair
was thick and long like hers,
washing it was an evening's work. It took hours
to dry. They lay in front of the fire,
hair out on towels. They roasted
chestnuts, popped corn, toasted
bread on long forks. Retired,
happy and warm to cold bedrooms,
fell into sleep and war dreams.

Our hair was done infrequently, too.
Our Dad, in one of two domestic tasks,
Scirocco'd it with a cloth-corded dryer. We'd ask
him to direct its cone of wind into
our open towels and he'd oblige, briefly,
then fluff our thin hair and pare our nails,
push back cuticles with his clean surgeon nails.
We'd hide winces, we'd say good-night stiffly.
In between washes, my hair grew greasy.
My mom pushed pigtails: "They're so easy!"

I pulled them out past view of the house
and went down to the park where stranger kids
asked, "Are you a boy or a girl?" I said
"girl" as a rule, sensing they'd browse
my crotch and find something lacking
which they did that one time I was wearing
my red jeans and the boy was staring
right there at flatness (It was years before I'd hear of packing.)
At the hairdresser, Mom said, "Just a trim.
Not too short. Make it feminine."

To me she said, "Why do you want to look
like a boy?" I said, "I don't." She said, "You do."
I said, "I want to look like me." It was true,
but she didn't buy it the thirty years or so it took
to come to some kind of truce, when she had it out
in a letter and promised to say nothing more.
In the meantime, she controlled what I wore:
girls' clothes: blouses, girls' jeans. I had zero clout.
I want not to blame her for all those years
of needless strife. But I do. It doesn't matter what I wear.

At twelve, with shoulder-length centre-part hair,
I went to a hairdresser south of Bloor on Yonge,
a cool one (it was advertised on CHUM).
My breasts were new: wee nipple-cones there
under my favourite blue and green striped T.
"Wow, you've got long hair for a boy," she said,
then thought the tears in my eyes were for losing said
hair, when they were all anxiety
about the nipples -- would she spy them?
Spot me for a fraud? (Didn't know then that if she did, she'd deny them.)

Earlier that year, at music camp, at a snowball dance--
you know, where on pair starts,
then the DJ calls Snowball and the couple parts
and grabs from the sidelines some chance
new date -- a girl took my hand,
tried to drag me onto the floor,
took my holding back for shyness and liked me more
but there were people who knew me and what if she found
out it wasn't a cute boy she was after
but an ugly girl? There'd be laughter

or worse. Wasn't the first time -- train porters, other
girls at other dances, bus drivers, cops,
random grownups, people in shops --
wouldn't be the last. My poor mother
winced and corrected: no, my daughter
(later, two bank tellers: "Anne. That's a funny name
for a boy." "Isn't that usually a girl's name?")
tried to teach me what life had taught her.
"I feel nice and comfortable when I know I look nice,"
she wrote at thirteen. Not bad advice,

but I fell nice and comfortable when I know
I look comfortable. When I know I look like
a dyke
or a fag (men shout it out car windows
late at night, drunk). Like a schoolboy (British),
like some backwoods hack, like a Mod,
like a hoser, like a jock, like a Dad.
Anything else, sir? I enter washrooms, skittish,
head down, cued for the double-take: me, the skirted sign,
me, the shake of the head, the hard line,
You're in the wrong washroom, guy.
Am I?

Today's book of poetry would be terribly remiss if we didn't mention Fleming's poems about various aspects of the difficulties around gender identification, sexuality, family, lovers, partners and a society that needs labels and so on.  Anne Fleming, we believe, with such unadorned honesty, clarity and integrity that her poetry does not need or broach any labelling.  Smart poetry like this could just as easily be about your life too.

And Fleming is a skater and a hockey player.  Today's book of poetry hasn't talked about hockey that much or all my hockey heroes.  So please know that we put Hayley Wickenheiser among the Gods.  poemw  provides all the evidence you need to know that Fleming is a hockey playing poet.  Joni Mitchell, another great Canadian skater, wrote about "a river I can skate away on."

Our new favourite skater, Anne Fleming, can come to Ottawa anytime, we've got the longest skating rink in the world and we love poets who make us feel.  poemw is overflowing with poems you need to read. 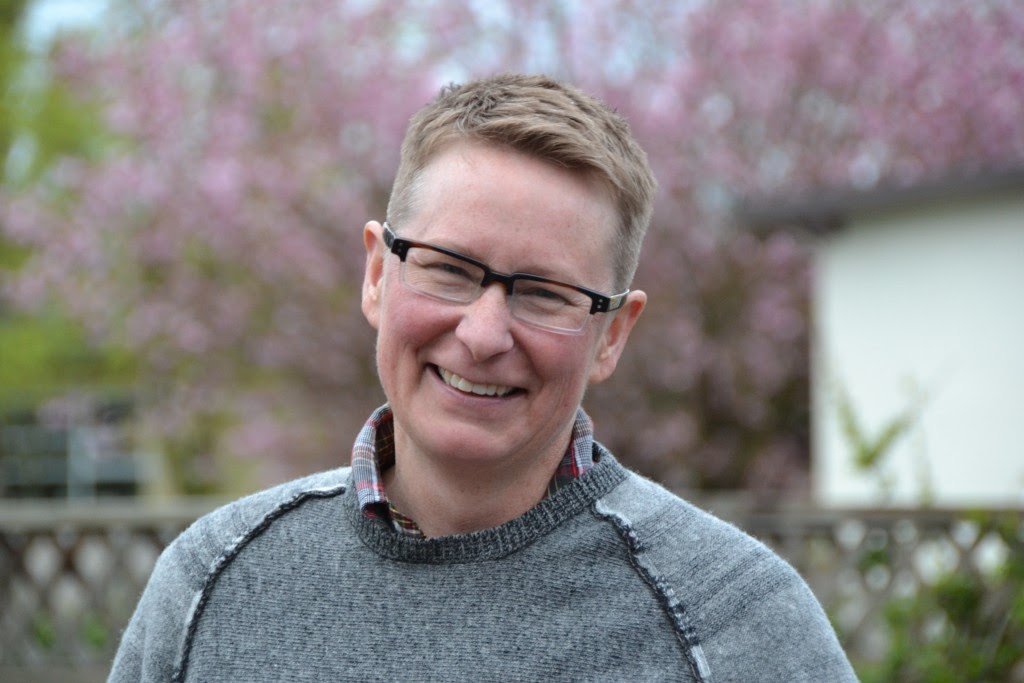 ABOUT THE AUTHOR
Anne Fleming is the author of five books: Pool-Hopping and Other Stories, shortlisted for the Ethel Wilson Fiction Prize, the Danuta Gleed Award and the Governor General’s Award; the critically acclaimed novel, Anomaly; Gay Dwarves of America, also shortlisted for the Ethel Wilson; poemw, a book of poems shortlisted for the BC Book Prizes’ Dorothy Livesay Poetry Prize; and The Goat, a novel for children. Her non-fiction has been published in a raft of anthologies, including Persistence: All Ways Butch and Femme, Great Expectations: Twenty-Four True Stories About Childbirth, and You Be Me.

“This is strong and mature work; Fleming’s poems are refreshingly self-deprecating, whip-smart and convey a deep humility.”      - Event Magazine