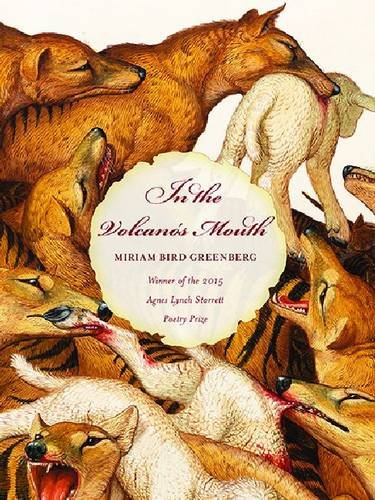 It's two days in to the new year and Today's book of poetry finds himself outside of a medical clinic shortly after eight in the morning.  I'm in a warm car, the engine running and I have Miles, Trane and the Cannonball keeping me company.  An old friend is in the clinic doing clinic stuff.

Knowing I'd be here a while, it's -25C which is why I'm keeping the car running instead of enjoying the heated waiting room in the clinic, I brought along Miriam Bird Greenberg's In the Volcano's Mouth.  If I'd known what was about to happen I might not have bothered with turning on the heat.

Miriam Bird Greenberg is a beautiful poetry monster.  How else to describe the delicious havoc these poems leave in their tidy wake, how else to describe these powerhouse narratives that arrive at their harsh conclusions so gently?  Greenberg totally disarms the reader with one sweep of her disarming brush and then knocks them all over with the return pass.

Three blocks from the Cyprus Freeway in Oakland,
which collapsed in the 1989 Loma Prieta earthquake,
with a line by Susan Moon

We climbed from the mouth of a volcano
all year, the year I moved west with my sweetheart

to live three blocks from where the earth had broken
open. Men in the Acorn Projects

remembered pulling strangers
trapped in their cars to safety. Brother,

one told me he'd said, we can be afraid
of each other again tomorrow. Twenty

years past, they'd made good
on their promise. By then I waited weekly in a food line

alongside Chinese immigrant women who fished
plastic bottles from the trash, eyes

roving for a coin, a lost prize, at the curb. Sometimes
I'd lift my hand to the lip--

look out over the volcano's rim, and there,
in a crevice, a scrap of paper, shining:
someone's private prayer

or prophecy. Everybody held out
hope, tended their small hustle. Women knocked

on the door selling broken-heeled shoes, loquats
picked in an abandoned yard, would try the knob

if no one was home. Could I make change
for a twenty, asked someone, unfolding one

she'd manufactured from a dollar bill.
Would you believe

beneath a bruised fingernail, star
of silence left high in the heart of a room

after the door's slammed. A couple sits, watching
one another's reflections in a mirror. The two

talk like this as evening falls
around them, and neither has the heart

to get up and turn on the light. "My body's here
but no one's in it." writes a friend; for me

it's different. I'd spent my childhood
in a house made of bees; on hot days honey

dripped through cracks in the ceiling. Me, I hummed,
coiled tight. It hadn't been long since I'd slept

in a creosote field while grainers crashed
in the switchyard nearby. Actual tumbleweeds

turned like prayer wheels crossing the tracks
and the constellations coyotes called to,

streaked across the night, were more miraculous
than freckles on the face of god. Around then,

hitchhiking past Death Valley, a pair of truckers
stopped for me. I used to haul cattle

to LAX, one said. But I couldn't take looking
into their mournful eyes anymore. I guess I wear my heart

on my sleeve, he said. They were climbing
through the Sierras to pick up a load of honey, telling jokes,

they both had wild white beards. I hadn't yet come
in my life to peer over the lip of a volcano,

I wasn't yet made of cicada's coils
and tymbal. Still, I carried a bit of string, a quipu I used

for eavesdropping on the passage of time.
If someone had put a knife in my hands, even then,

who carried a small jar of her own baby teeth
with her in her pack.

Today's book of poetry is tickled to bring such a high-stepping collection up to bat for our first book of the year.  It's too early for any "best book" of the year comparisons but we are certain In the Volcano's Mouth will be part of that discussion.  This is superb poetry.

Greenberg writes poems that are full of new information that feel like old knowledge, these poems feel like a modern folk tale happening in real time, stories we've known all along.  It's not quite haunting but it is close to unnerving as Greenberg unleashes her formative artillery and these poems spill out in front of us like accidents that were meant to happen, prophecies we are only hearing about now.

My room is hemmed with rain; otherwise its windows
are a scrim of moths pressed
against the light, tracing feverishly

their dizzy script, and I am made from shadows
they cast,
passport stamps from Moldova

and Suriname. If you passed me working
at a telephone box on the corner, a thousand wires
humming, and I

in my mechanic's jumpsuit, phone co.
logo over the breast pocket, you'd never glance back
twice. One night I sat drinking

on someone else's porch
after a rainstorm. The light was off, it was late, and no one
came home. The moon cast my dim shape

into the yard, and the clouds racing over it
were skittish
as rabbits. I am getting ready

to see you--shaving
my legs, painting my fingernails
and my toes. I put on a black lace bra

you've never seen me wear. I've held the throat
of an animal,
and broken its neck. I'm climbing

out of my skin. One night
a woman I knew immersed herself in a bath
of India ink, came out

darker than the rafters
of a empty house. Her mouth
burned red, open as instinct

makes a fledgling's mouth open, and her ankles
were more beautiful
than a sapling bent

by wind. More beautiful than the new body
of a snake emerging
from its winter skin in the rafters. Somewhere far off

I can hear the sound of a telephone
ringing in an empty house.
Don't empty houses ring? Listen

how echo inhabits a place it knows
no one's home. Sometimes on the subway
you catch sight of someone familiar--your eyes meet

but there's nothing to say that won't be swallowed
by the throng.
Your shadows are tangled

in the legs of the crowd, are talking already, or fighting,
or fucking. Whatever you wish for
in secret, and each one's ankles

are more beautiful than the other's. Do you remember
the morning when,
before I'd laid the iron to my work clothes,

you pinned one arm
behind my back? Something trembled
in the palm of your other hand--

an egg yolk--and you poured it
into my mouth. Breath
chasing breath's dizzy script,

it was slippery in my throat
as a minnow passing through your fingers
into shadow, as a paw print

on the loamy creek bank
tires of the rain
that erodes it, and I became a swarm

of dust-winged moths
then that filled the air where a moment before
my shape had stood.

Our first morning read of the new year had to wait until the afternoon.  More snow and slow minions meant for a later start than normal to our poetry world.  Milo, our head tech, was all Campbell McGrath happy as Santa brought him three early McGrath titles.  Kathryn, our Jr. Editor, was happy because I told her the David Lee had another book in the offing.  She likes to refer to him as Sir David of Lee, and rightly so.

The rest of the staff seemed to have made it through those damned reindeer and Fat Man in Red.  Miriam Bird Greenberg brought everything into focus real quick.  Milo was the first to say it out loud when he said "if In the Volcano's Mouth is any indication of what is ahead in 2018 we are in for one hell of a year."

Living in the End Times

We sat in the ruins
and made tea from the flowers.

Who among us knew
anything? The mourning machine

to reap what had grown. There
at the edge of the field

crouched some children, ready
to dash through the field stubble

to pick through the wrecked rabbits' burrows
the machine had uncovered, then left behind.

Miriam Bird Greenberg writes with such clarity that it breeds instant familiarity, gives instant access to the undercurrents, the swirl darkly at the edges of all these poems, she is almost tender about it.  Today's book of poetry is excited to start 2018 with such an outstanding books of poems.  This is Greenberg's first book but it never shows, before she is done you will want to have every word she has written.

Today's book of poetry starts the year with a bang.  Miriam Bird Greenberg's In the Volcano's Mouth will cook your poetry brain from the inside out.

ABOUT THE AUTHOR
Posted by Today's book of poetry at 10:06 AM