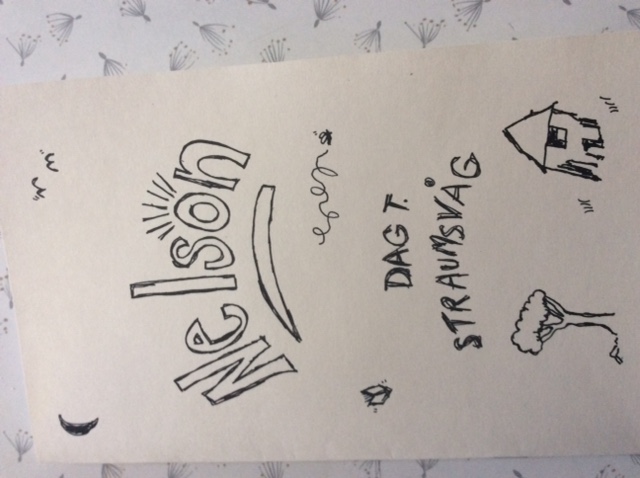 Not that Today's book of poetry won't/can't take responsibility, but I do have to tell you that Milo, our head tech and digital Prince, isn't in the office this morning.  That I was able to take a photo of Dag T. Straumsvåg's Nelson is an accomplishment.  I had help.  Odin, our former head of security, returned for a visit this morning and we were so damned happy to see him that we felt drunk.  All of that before mumbling out an apology to Dag, Today's book of poetry is sorry our cover photo is sideways.  Damned Commodore 16.

Norwegian poet Dag T. Straumsvåg wrote Nelson with his Highness Mr. Ball in mind, a tribute to be sure, but Dag wasn't intending to mimic Ball's style.  And he doesn't, Straumsvåg is a little closer in style to Stuart Ross, the irrepressible poet/publisher and all around mensch.

Dag T. Straumsvåg does capture Nelson Ball's whimsy though, a bit of his clear light.  These poems fall like a light rain but every image acts like a seed.

Coldest
day
of the year.
The fly
on
the windowsill
rubs
its front
legs
together,
trying
to make
fire.

Old Dag T. had a dark hue to his sense of humour, just the way we like it.  Today's book of poetry wanted to ask him about the Death Metal scene in the Botswana of his memory.  Now there's a poem that packs a Kung-Fu poetry punch.

For such a small press Proper Tales Press continuously ups the ante with the breadth of their titles and authors.  Regular readers of this blog will know that Proper Tales Press publisher Stuart Ross (who we have written about several times on our blog) is a close friend of Today's book of poetry.  Our guest room is named after the man.

Mr. Ross casts an awfully wide net and it shows.  Proper Tales Press has a long and consistent record of original voices and Dag T. Straumsvåg joins an excellent chorus.

Our morning read was flat out zany.  Odin was back in the fold for the day and that brought a tear to my eye that I wanted no one to see.  I pretended I was sneezing when I pulled out my big hanky.  Thomas was happy to see Odin as well, Odin taught him what he knows.  So we let Odin lead the show.  These short poems were worth reading slowly.  This little collection left a big impression on us all.

Sometimes poems just seem to fit into your head space,  Dag T. Straumsvåg seems to have whittled his work down to fine, smooth projectile that always finds its mark.

We're offered amnesia
and we accept.

We can make good friends
out of blue clay.

We can count
the buttons on our shirts,

with darkness in the hills,
learning to whistle. ABOUT THE AUTHOR
Dag T. Straumsvåg was born in 1964 and grew up on the west coast of Norway. He is the author and translator of four books of poetry, most recently The Lure-Maker from Posio (Red Dragonfly Press, 2011), translated by Robert Hedin and Louis Jenkins. A selection of his poems is included in Robert Hedin: At the Great Door of Morning—Selected Poems and Translations (Copper Canyon Press, 2017). His poems have appeared in numerous journals in Norway and North America. He lives in Trondheim.