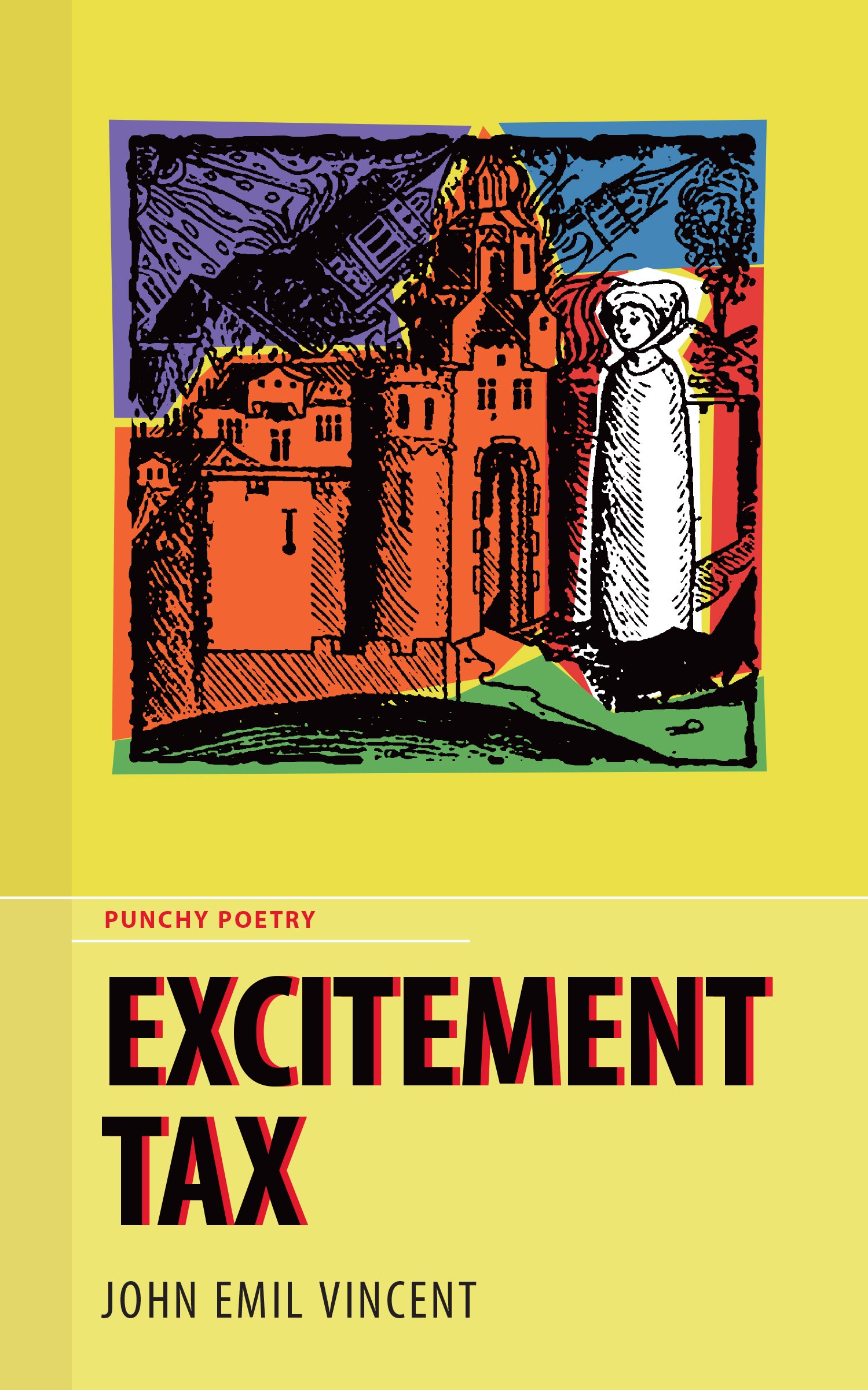 Today's book of poetry was only eight or nine poems into John Emil Vincent's Excitement Tax and we knew that Vincent should drop his other misadventures and write poetry full time.  Of course it won't feed the cat, but.  But, Vincent can seriously burn.

Excitement Tax starts off sprinting and never pauses for breath.  We get introduced to "Weaselbird" who seems both a symbol and a foil, but mostly a tool for the spontaneous glee that comes bounding out of every line in these poems.  Weaselbird is quite the character.  So was Gulley Jimson.

“Nothing like poetry when you lie awake at night. It keeps the old brain limber. It washes away the mud and sand that keeps on blocking up the bends.
Like waves to make the pebbles dance on my old floors. And turn them into rubies and jacinths; or at any rate, good imitations.”
― Joyce Cary, The Horse's Mouth

John Emil isn't showing all of his cards all of the time, no good gambler would.  Today's book of poetry isn't suggesting Vincent is borrowing anything from Mr. Cary but rather his Weaselbird is a bird cut from the same cloth as Mr. Gimson.

Here everyone does their part to maintain the punctuated
equilibrium: The kid facing the wall, thinking: how
innocent whoever invented hell. Then that kid: a knot
attracting other knots. The kid hung italic on her shoulders.
The girl who will build a toy empire. The boy who will
rule it badly. Two friends whose peculiar brand of grace
is to be wholly forgotten. Two, who, coy, hunker in the
gutter of the gathering. They will be sculpted in butter.
One who points like a duke trying to point like a proverb.
One whose very face says: my pappy gave it me. One who
smiles wisply to forestall the ink lines of the meat chart.
One fogged with breath.

A good two feet below eye level, they wield their glossy
shields against self-esteem. Young the way eloquence
outlasts insight. Each so easily imitated as to be one of
a kind.

The mystery: which will have sweetness beat out of him,

Erudite is a word that Today's book of poetry has to look up in the dictionary every time we use it.  John Emil Vincent is the Vincent Black Shadow of gloriously glib glottis glee — Mr. Vincent is Erudite.  This poetry compels you to turn the page just so you get to hear more of John Emil Vincent's engine running.  Today's book of poetry thinks Vincent jazzes it up like a 60s French cellar full of Chet Baker, Anita Baker and a rumbling Studebaker Avanti.

Today's book of poetry had some special guests stop by our office yesterday.  Larry R. Cowan of Monk Press fame came and sat on our porch and drank cold beer along with his much better looking partner.  Mr. Cowan wanted to see how our operation ran, even threatened to copy some of our office organizational hardware.  Today's book of poetry was tickled that they wanted to come by, delighted that they brought beer, and everyone here in the office thoroughly enjoyed their stay.

Vincent isn't shy about graphic exploration of sex, sexuality, sex acts.  As Elizabeth Bachinsky said of John Emil's poems:  "like a box of candy," "sweet surprises."  Of course some of these sweet surprises are bittersweet, some of them might even sting.  Vincent is talking about gender straight up and with a clear voice, a matter-of-fact resonance to it all.  Vincent knows that pandering always reads fake and there is not a false moment in Excitement Tax.

I love it when movies give tips. 25 yrs ago, Betty Blue: an
incidental friend of the tortured couple enters to describe
how one must wet the filter before ! adding coffee; like
watching one very small uncoordinated boy teach a smaller,
less coordinated boy to shoot baskets. As if an elderly
relative sidled up, said: something I'd like to give you.

All about the soft focus foxing of the Polaroid. I see, starts
Weaselbird. Don't forget to mention the way an echo gets
gentler and gentler til it comes back for one last turn as a child
in the 50s trying to quietly nudge a sibling awake in a bunk
bed for a detective caper with a giant silver flashlight, a stub of
golf pencil, and a pocketful of kibble.

You see, indeed! I titled this for you, sweet critic of my
choosing. You can stay skinny for a while on reds but blues
will find you eventually and you prolly oughtn't mix them in
whiskey, but do: and call it the "Abraham and Isaac." And
it seems glam, a trailer at the shoot, but really it is just
an RV with a plastic toilet seat and wrapped utensils and
blocks of squeaky cheese. Deliver line, throw on blanket.

sit 'pon fold-down steps of shitbox and never will you
recall this day without demonstrative pronouns til some
gothic, letter-boxed edition of it blows across the land and
you're as surprised as anyone else, which is how you've
avoided vanity, and possessive pronouns, because you never
really did that in the first place. Or rather, like Calvinism:
your feigned ignorance is a sure sign that you really did
do that and o boy Isn't It Good. The ultimate lesson of
all things:

better to own, but richer to rent.

Regular readers of Today's book of poetry will know how much we admire smart.  The first thing I said out loud to K when reading some of Vincent's Excitement Tax was that this cat can seriously burn, he's a freaking Julia Child.

Today's book of poetry recently read Julia Child's My Life In France.  The result was a huge crush on the brilliant cook, the beautiful chef, and more admiration than we can express for Dame Julia.

John Emil Vincent throws Marlon Brando and Sylvia Plath into the pan, stirs in some vibrato with Mr. H. the Bosch, and Bob is your uncle.  Vincent likes to keep his oil hot.

Our mourning read was splendid and made all the more so by a prank from our most excellent mail carrier, Jean-Marie.  In the end Today's book of poetry did get two poetry packages containing five books, but not before Ms. Canada Post made us dance a little.

Existential Tips From Our Studio Chef

If your narcissism whinges too much, try counterclockwise.
Reality's resilience is a bonus, just don't come to count on
it. Think of it as habit, not reflex. If necessary to buck your
tic toward collapsing sequence to category, close your eyes.
Press the lids. The little supernova light blob will come,
then go. You may notice some elegant branch-shaped
veins. Come to suspect everything is a lesson. Be, however,
Always Skeptical of Absolutes.

Anticipate the double bind but don't try to outsmart it
by underthinking! Remember that most wrongs later in
need of redress will be racked up in your profitless research.
Success, then, second order: by comeuppance once
removed. Resign yourself a little. Guilt's a great healer!
Then feel proud of your resignation and make yet another
gigantic categorical error that will set you back years. That's
okay. Really, it's the fire you need under your ass and in
your 50s will be just the thing. One trick I like is the bad
people are their own punishment defense. Use that liberally.

it really is like aspirin, an oldie and a goody. Analgesics
from another better simpler time still working their magic.
And of course, your worst enemy, and your best friend, is
Mister I told you so.

But I'm getting ahead of myself.

John Emil Vincent's Excitement Tax comes in at a tight and tidy eighty pages or so.  Today's book of poetry wants more.  Vincent is that gentleman at the other end of the table at a dinner party.  Everyone is leaning in hard, straining to hear, because experience tells us that is is going to be wicked good and perfectly bad.  Vincent is a poet who is comfortable under the full gaze of the most diligent reader, his bad engine purring.

ABOUT THE AUTHOR
John Emil Vincent is a Montreal-based poet, editor, and archivist. He’s taught literature, queer theory, and poetry writing at Concordia and Queen’s in Canada and at Wesleyan, Haverford, and University of Miami in the US. He and his partner, Luis Loya Garcia, emigrated to Montreal in 2010 to get married and escape anti-immigrant laws and sentiment in the US.

Vincent earned his BA in Religion and Literary Studies (French) from Williams College where he worked with Louise Glück. We went on to earn an MFA from Warren Wilson College (in North Carolina) where he worked with Heather McHugh and Larry Levis among others. Toward the end of his MFA he started his PhD in English across the state at Duke University where he studied under Eve Kosofsky Sedgwick and Michael Moon. He was among the earliest cohort to graduate specializing in Queer Theory. While at Duke he published an essay on Swinburne and whipping in Eve’s collection Novel Gazing and co-authored an article on Latinamericanism and “My Own Private Idaho” with José Estaban Muñoz.

He recently earned his Masters Degree in Library Science (Archives) from Simmons College (in Boston). He has worked doing preservation work for John Ashbery in his home in Hudson, New York, and has worked helping organize James Tate’s papers and books after his recent death.

He served as Editor-at-Large for the Massachusetts Review, where he edited a double “especially queer issue” packed with queer literary luminaries and a special issue celebrating the 50th anniversary of the UMass-Amherst Program for Poets and Writers. He’s served as poetry editor for the now-defunct Swink magazine and issue editor for tinywords (a web-based haiku journal).

He has published poems in jubilat, Denver Quarterly, BlazeVOX, Slope, Spork, failbetter, Drunkenboat, and many other journals. A number of his poems appeared in an anthology of new gay poets, entitled This New Breed, edited by Rudy Kikel (Windstorm Creative 2003).