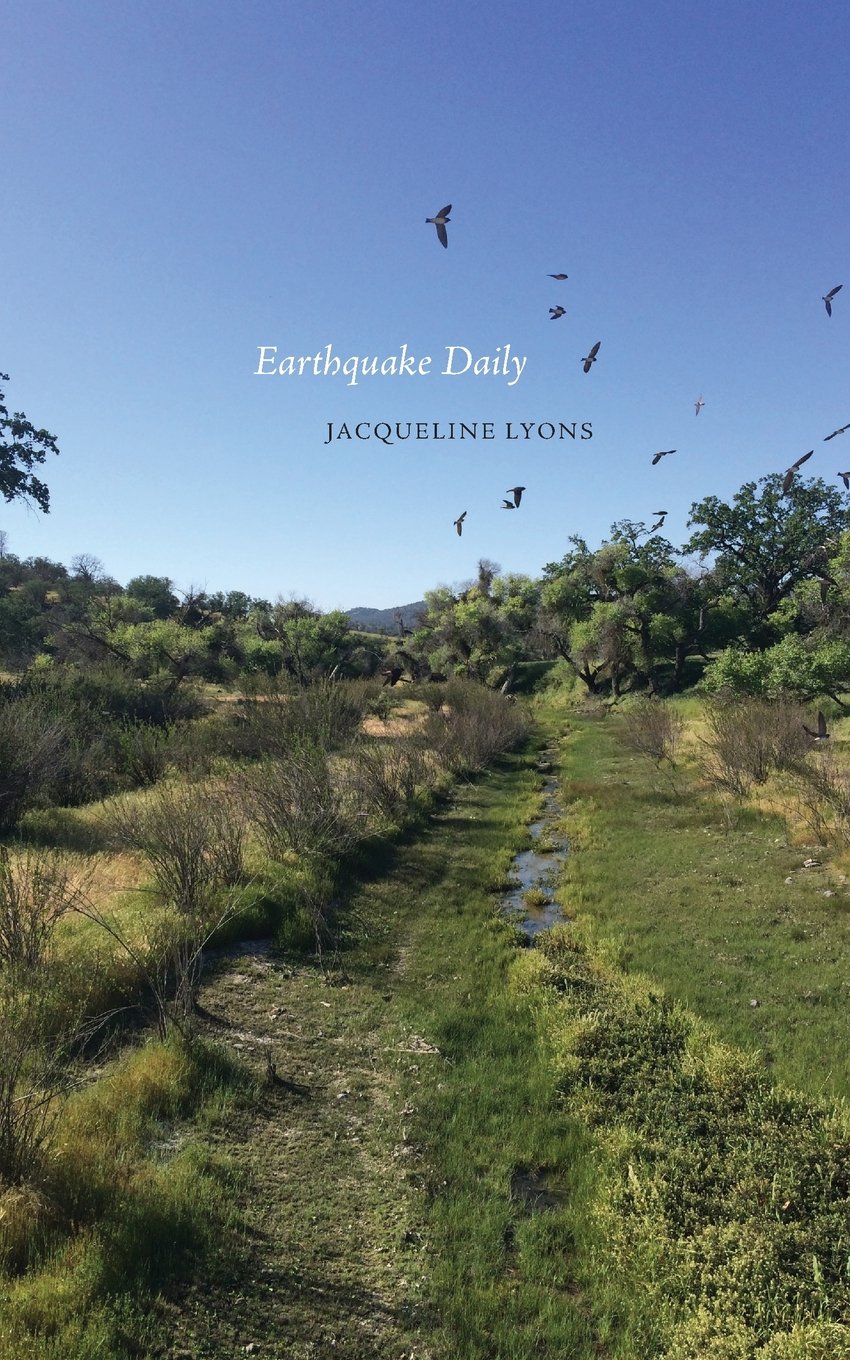 Jacqueline Lyons is trying to shake things up by tying us to an earthquake binary.  Earthquake Daily isn't necessarily going for the funny bone but Lyons keeps banging that funny bone spot with a deliberate accuracy.  Of course that all comes in a distant second place to the emotional fireworks Lyons exposes to the air with her calliope of chthonic wonders.

The crack in the surface of things allows for Lyons to give splendid free reign to her free associations, revelations and encapsulations.  Earthquake Daily is a poetry almanac, a poetry bestiary, of earth splitting reason and then the subtle undulations of Lyons' myriad mystical after-shocks.

Saturday the earth shook and was going to shake

The quake centered in heat, and a vision of paper as wood,
wood as rock, and the rock on fire, according to the USGS

Small fires broke out across the region from diaries too hot to
handle, reported LA police and other officials, "not only the tiny
gold locks," they said "but the syllables themselves conflagrate"

Another resident surrounded by air and light described a
process by which green plants and some other organisms use
sunlight to synthesize foods from carbon dioxide and water,
generating oxygen

The quake was unusual for how keenly it illuminated the
distance between gold and silver, silver and bronze, bronze and
lead

The quake likely would be studied by non-believers who
believed in many things, like water and trees as analogous to
heart and lungs, and how a landscape's beauty is determined by
the rock (bone) beneath

Near the epicenter, crews searched the ground for slight
depressions suitable for curling up and lying down in

New agencies received scattered reports of people voluntarily
inverting, "to make the ground become the sky, and to replace
the sky with ground"

Scientists traveling in a van toward the hot horizon observed
the road turn to water, and the water evaporated into air.

If this were batting practice; Lyons hammers another and another, and so on, solid and for distance.  If this were my poetry kitchen we'd have to report that Jacqueline Lyons can burn.

Earthquake Daily reads like a Tim Burton film where you don't need a glossary to understand the action but you certainly have to suspend your disbelief.  Lyons is simply marvelous.

Seismologists from Iceland to Ireland and all points to and fro will think of Earthquake Daily as an important new text in their lexicon.  Earthquake Daily will be the new standard for all poetry measurements of seismic activity from this point on.

If today were a color, coral
of hot sunrise in September, dog days gone on too long,
feeling like forever

If today's heart were a dog's, it would beat erratic

If today sustained an injury, it would be on the spine
preventable, inevitable, straight out of the earth in
a bruised time

Today's plan — in the skeletal stages

In today's bony hand a sign: Prepare to Stop

If today were a string it would be attached
by barbed wire or barbed threads and with thready pulse
to the past's tarnished glass.

Our morning read was earth shaking.  Little did we know that there was a "rumbler" flattening some ground in a lane way nearby.  We assumed, for a short moment at least, and because Ottawa sits over an active center of earth shifting activity and is prone to quakes, that we were experiencing a sympathetic earthquake.  Seismic poetry to be exact.

Everyone on the team pitched in with enthusiasm as Lyons poetry takes everything in the world seriously while not taking itself terminally grim.  Serious enjoyment is abundant on these pages.  Every poem offers you price of admission returned plus a bonus.

inside her third eyelid an incoming tide washes up a vision of
bed and bacon-flavored treats, of low couches made of wool
and fleece scattered with peanut-butter treats, cushions to
laze upon and run in place while asleep

in washes a thought: live long enough to tire of couches, surpass
sand and salt
and put bare belly to the duck-flavored waves

morning has arrived, and brings with it an open door, a full
bowl
so she waltzes her ebb and flow

she sends me a message in a bottle
by pressing her seal-fur-forehead to mine
"Wake up and taste the salmon-colored sky."

ABOUT THE AUTHOR
Jacqueline Lyons' first collection of poetry, The Way They Say Yes Here, was published by Hanging Loose Press as part of their 2003-2004 series. She has won a National Endowment for the Arts Literature Fellowship, and her work has been nominated for a Pushcart Prize. Her poems and essays have appeared in numerous journals, such as Barrow Street, Bellingham Review, Beloit Poetry Journal, Chattahoochee Review, Florida Review, Hanging Loose, Permafrost, Phoebe, Puerto del Sol, Quarter After Eight, Sonora Review, Turnrow, and others. She earned her MFA in Poetry from Colorado State University, and is currently working on a PhD in Literature and Creative Writing in Salt Lake City, Utah, where she also serves as nonfiction editor for Quarterly West.  She lives on the souther segment of the San Andreas fault.

BLURB
"Highly inventive, these poems feel driven by emotional and cultural urgency, as earthquakes shock every part of the system, personal and collective.  This is a world where the U.S. Geological Survey monitors catastrophes of mind and heart, where a quake strikes "during 47% of our waking hours when we were thinking about something other than what was actually happening."
— Dana Levin