SHORTLISTED FOR THE RAYMOND SOUSTER AWARD 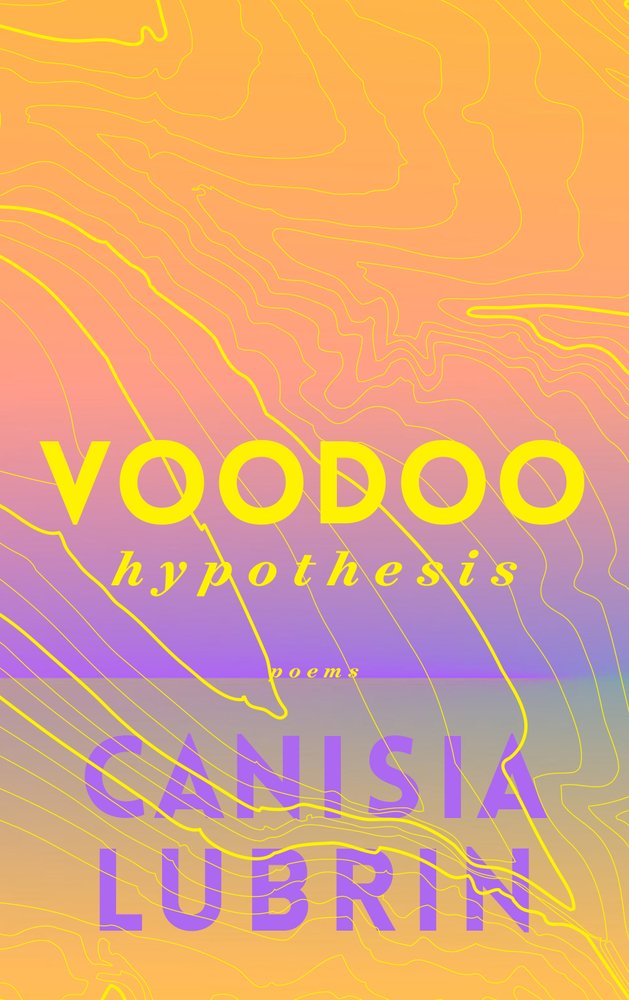 On our first reading of Voodoo Hypothesis our reaction was luke warm.  But not warm enough to get excited enough to write about.

And then, contrary to our belief system about readings and how they relate to the printed page  —  Today's book of poetry heard Canisia Lubrin read.
Damn.

It has never felt quite so good to be so wrong.

Today's book of poetry remembers seeing Allen Ginsberg on stage with the CeeDees back in 1980's Toronto.  I even got to shake the hand of the great man.  Saw Irving Layton when he was still close enough to his prime to be a walking God.  I heard Earle Birney read, he came to our home and had tea.  Saw Al Purdy a few times too.  Today's book of poetry read with Milton Acorn once and he was a true giant.

But Canisia Lubrin reciting her title poem Voodoo Hypothesis with nary a page in sight was one of the more prodigious poetic feats I've ever encountered.  Griffin nominated poet Sandra Ridley was in the audience.  Today's book of poetry is a big fan of Sandra Ridley and we listen any times she speaks.  After the reading Sandra and I were talking about Lubrin and agreed, one of the monster readings we'd ever witnessed.  Hands down.

It was stunning to behold.  Lubrin was somewhat sheltered from the view of much of the audience, reading from a well lit corner of the Manx Pub, so not everyone got to see exactly what was happening, but I was front row center.  I saw the lightning bolt she shot across the room.

Before sight, we imagine
that while they go out in search
of God
we stay in and become god,
become: Curiosity,
whose soul is a nuclear battery
because she'll pulverize Martian rock
and test for organic molecules
in her lab within a lab within
a lab. She doesn't need to know our fears
so far too grand for ontology, reckoning.

Did you not land with your rocket behind
you, hope beyond hope on the tip of your rope
with the kindness of antigravity slowing you down,
you, before me, metal and earthen. But I am here to
confirm or deny, the millions of small
things that seven minutes of success were hinged upon
when I was little more than idea and research,
in the hypnotic gestures of flame and Bunsen burner,
and into parachute
no one foresaw, the bag of rags at the end
of the tunnel - all memory now,
this Paraclete.

Where else is a pocket
of air more deadly than the atomic bomb?
Would this only happen on Earth?
Has Mars run out of tolerance for the minutiae

of air pockets, fingerprints and worry?
Aggregates of metal, Curiosity
and her clues to calm our fears for what's coming.
Mars and her epic storms, her gargantuan
volcanoes have long ceased their trembling,
her crazy flooded planes, frozen and in cinema.
Martian life now earth and revelation's phases:
Earth problem,  not Mars problem.

But why
should I unravel over all this remembering?
Great thing about landing
is that I've arrived

at your service, at your sand, at your valley
and unsentimental magma.
Before me screams planes like Mojave Desert, Waikiki, Nagasaki,
nothing too strange to keep Curiosity off course.
Even though the Viking missions found no conclusive pulse
and we declared you dead, O Mars,
never mind that we named your heights and depths
from orbit. And from your spheres of minerals
where oceans once roared - we've learned little
of your lenience for empire.
Forgive us what Spirit uncovered in the silica of your ancient hot springs.

Ah, yes, we've come back home.
Phoenix told us we inherited the numberless
stories of your hydraulic pathologies
but I am Curiosity. If I kill the bitch right,
she'll take us deeper and convince us to send earthlings
to set up Earth colonies on your deserts. They won't ever
come back, but that's not so bad when we trade in
the grander scheme.
As though the colonials, the Tribe Traders
and all the pharoanic masquerades of gone times
were not fair threat. That we won't know the depth
of our homeward seas
is nothing when

the sun's still got our backs.
And while waters still vaporize before us
Curiosity will keep on until the organic secrets
of that Martian puzzle become as household to us
as carbon. Oxygen wasn't the only disaster to befall Earth,
to bless her with life.

Apollo drilled on the moon and got stuck
and the harder we've drilled down here
the more we've loosened our screws.
Perhaps there'll be no one left to give
a damn about the death of our privates

unless we prove ourselves enigmas,
the alien we think we know is the alien we only dream
up starting from the bottom
of the Curious.

We wake and die through
the crowns and thorns and craned chapters,
we move too quick for understanding.
Still, through the decades we predict,
Curiosity confirms the cold-slain dust.

Then come her conches blown
in the hard-won postcards travelling
on space dust faster than a bullet
to say:

hey,
I'm here. I safe. Wish you were here.
See Gale Crater, Mount Sharp, just as you've said.
Come bask with me in the wonders of a Martian. Good afternoon,
you of flowering faith. Set sail for home,
because we will all wear the consequences of this choice.
And you never should have said
goodbye.

So, Today's book of poetry went back to the poetry drawing board and started over with Voodoo Hypothesis.  Happily we were able to see what we'd foolishly over-looked on our first reading.  Lubrin's engines were running a little faster that what we were used to.  With some slight adjustments, a mental kick in the ass reminder, so to speak, Today's book of poetry was finally able to slip into the correct gear.

Canisia Lubrin is a poet you are going to want to stay in tune with, her voice is the next generation of strong Canadian women.  This is a vibrant voice keening with history, richly tempered by the lessons of systemic diaspora and frantic with love disguised as hope and reason.

Bjork and PJ Harvey are blasting from the office box, a complete re-invention of the Stones classic "Satisfaction" and it seems to be complete synchronicity.

Today's book of poetry thinks Bjork and Harvey would be down with the Lubrin train.  Voodoo Hypothesis invokes zombies, St. Lucian folklore, the ghost of Saint Derek of Walcott, Creole dynamism and more.

Epistle To The Ghost Gathering

Dregs have formed us
molten inside. Here, a road, the core
this earth, a single-celled fire
a break in the vein: no exact archipelago
to dream what sealed its original shape.

Still we hail a fire that buzzes us in,
our swat-genes: still, our song
our burden beyond sanity: don't be afraid.
This may not have been the only home
reshaped by our before-selves-
Scarlet alphabets breaking the chains
of this age. Music not dialogued
in the cosmic blues.
A castoff in that short fuse, these
dogged admissions in asteroidal jazz.
Even loss can love what we mimic
in tanglewood, found summers in us -
A dance extinction loves, us until a great
height forms that almost-slay in us: come home.

Our morning read had Alexander, our historian, chain smoking and shaking his head.  "This is a deep river" he said, shaking our reading copy of Lubrin's Voodoo Hypothesis, "and we're going to have to all jump in."

Today's book of poetry did not waltz into Voodoo Hypothesis on first reading and it was our fault.  Our primary reading skills need some honing from time to time.  Canisia Lubrin provided the perfect platform for us to stretch our sympathies as we stretch our understanding, reminding us once again of how much we have to learn.

Kathryn, our Jr. Editor, and Maggie, our new intern, both adored Lubrin from the get go and looked at me like I were stupid when I passed it by the first time.  Kathryn and Maggie were right, and I was wrong.  (I had to promise to print that)

Think you are apart from the name
that stuck, apart from relics of
supersun, vulva and misnomer
garden and virgin and beast.
You must know, black isn't always the void:

to be a living fossil, light-years old
perhaps, the bougainvillea must think itself
aloof. that its fruitless state by twilight recalls
the bloom of suns. Small suns considered
suns because they remain, vibrant
no matter how barren the winter - how dark.

Think yourself manly as tiers of black pyramids
you mark, golden with vomit. Think the ancestral
footsteps in that spring-rushed courtyard, a stooled help.

Think yourself womanly as the one-eyed tower,
with patience to turn a thousand years of rancid
butter into a mountainscape
of nigger dreams, ascending -

Canisia Lubrain can burn, burn, burn.  Today's book of poetry never likes to be wrong, but even worse is not learning the lesson.  Voodoo Hypothesis is the next book of poetry you should read. ABOUT THE AUTHOR
Canisia Lubrin was born in St. Lucia. She has had work published in literary journals including Room, the Puritan, This Magazine, Arc, CV2 and The City Series #3: Toronto Anthology. She has been an arts administrator and community advocate for close to two decades. Lubrin has contributed to the podcast On The Line, hosted by Kate Sutherland for The Rusty Toque. She studied at York University where she won the President's Prize in poetry and the Sylvia Ellen Hirsch Memorial Award in creative writing. Lubrin holds an MFA from the University of Guelph and teaches at Humber College. She lives in Whitby, Ontario.