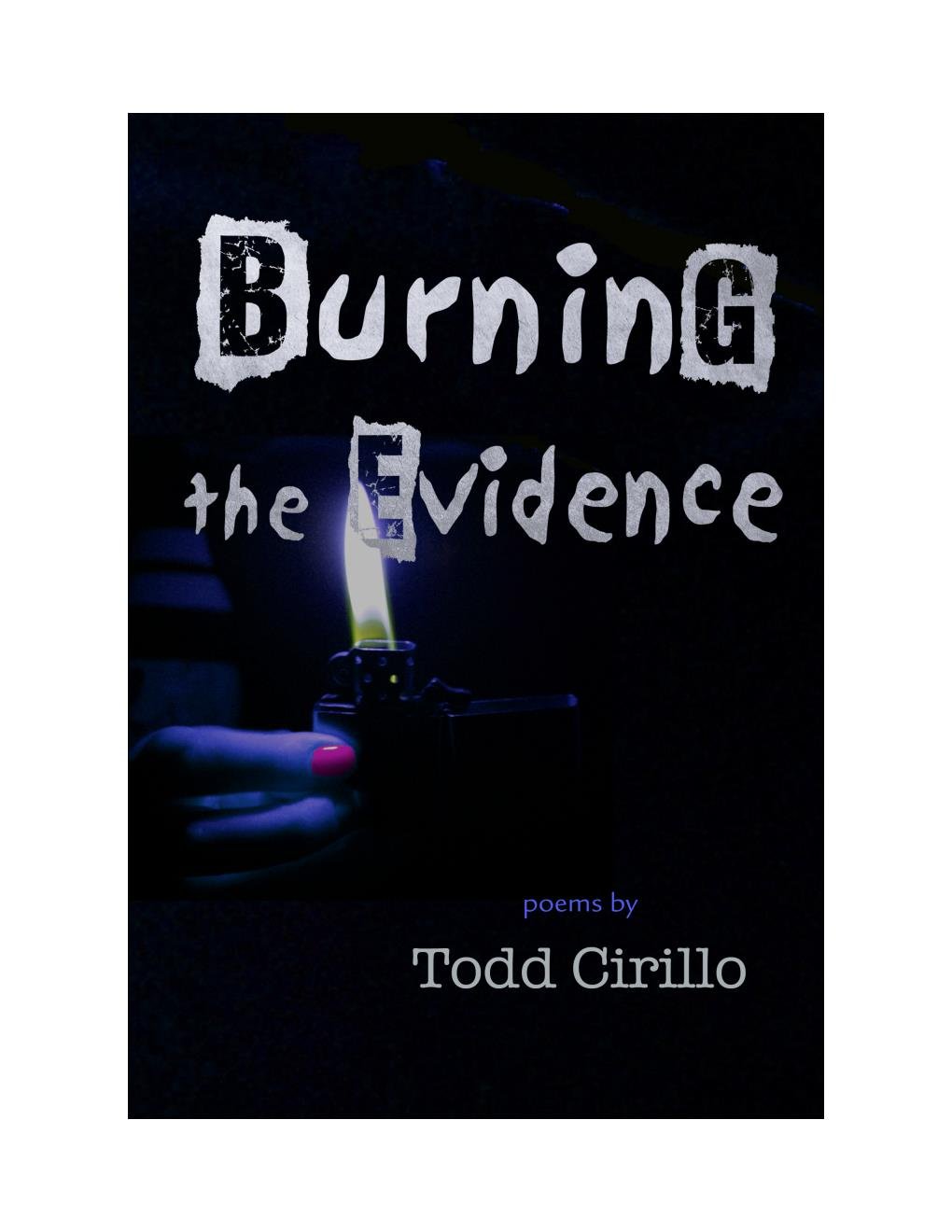 Todd Cirillo, like Heath Ledger's Joker, is quite prepared to watch it all burn.  These poems evoke an anti-establishment ethos from the first hard line Cirillo pounds down.  And all the poems that follow are similarly crafted, hammer to anvil.

No one likes the Bukowski reference these days but Today's book of poetry is too old to know who the new age Buk might be, so there you go.  But we'll settle for any hard-drinking, hard-living, hard writing, truth teller who can make us laugh and make us cry.  Burning the evidence is our huckleberry today.

It was the last time
you would stay over,
ever,
and I wasn't sad
about it.

We agreed to say
it was not you
and it was not me.

But really,
we know,
deep down
that the next time
we are at the bar
telling our story,
we will say
it was definitely
you.

Todd Cirillo brings his own take on things to the game.  Cirillo leads with his heart more often than the traditional tough guy but nothing comes easy when your girlfriend owns a .357.

The heart and soul of the matter is that Today's book of poetry simply likes the way Cirillo talks.  We like the way he gets from A to B, and what he has to say along the way.  Burning the Evidence bristles with anecdotes and love songs, accusations and admissions, and Cirillo makes them all feel true.

These poems feel as though they could happen to you, or may, in another place and time.

I had been drinking Moscow Mules
for half the day,
trying to work on poems,
attempting to get the words right,
elicit the correct emotion,
break the perfect hearts,
I drank,
I wrote,
I drank,
I wrote.

At 6:30 pm
my girlfriend
joined me.
When she arrived
I got up to go to the bathroom
grabbed my poems
and stated,
"I'll take the poems with me
so no one steals them."

She quickly responded,
"I think there's enough toilet paper in there."

Burning the Evidence isn't all love's battlefield and hungover mornings.  Todd Cirillo is also able to play the love poem, sweet like a cooing dove, without cloying and only a minimal threat of violence.  Cirillo knows he is always holding the trump card, joker that he is.

The morning read at the Today's book of poetry offices was led by Milo, our head tech.  Milo was convinced early on that just like some other Epic Rites Press poets, Cirillo could really burn.

If Burning the Evidence were a Tom Waits album it would be Blue Valentines, Rickie Lee Jones on the back cover, bent over backwards or a Thunderbird, her blonde hair falling like a dangerous rainbow over the back of the car, like a summer shower with lightning in the offing, the blue neon green of the night all ambient and tender and frightening.

If Burning the Evidence were a meal, it would be the special at a diner, but the gravy is made in the kitchen, the fries are homecut, and the apple pie was made by Mom.

If Burning the Evidence were a car, the body might need a little work, some bondo, but it would cover ground like a cheetah and run like a top.  Maybe some grumble in the idle.

You get the picture.

I won't lie—
it has gotten incredibly difficult
to recall
who I wrote which
poem for.
the names and moments,
even the years
have begun to blue together
in a kaleidoscope
of inspirational moments.
Luckily—
after reading my poems
when a girl asks,
"Who was THAT one about?"
I always remember
to tell the truth:
"That one was
for you baby."

Burning the Evidence by Todd Cirillo runs a little hot, pick it up with care.  But pick it up.

ABOUT THE AUTHOR
Todd Cirillo is co-founder of Six Ft. Swells Press and one of the originators of the After-Hours Poetry movement. He is sought after as an editor and performer and has worked on numerous collections for poets and writers. Todd is widely recognized for his performances. He has read from Jack Kerouac's On the Road to the accompaniment of famed musician, David Amram, performed at the infamous Bukowski Festival in Long Beach, CA, been featured in Portland, San Francisco, Sacramento, New York City, New Orleans, Paris, beaches, barrooms and back alleys.
His books include; Burning the Evidence; Sucker’s Paradise; ROXY; Sexy Devils; Everybody Knows the Dice are Loaded; This Troubled Heart; Still a Party; Tonight, You’re Coming Home with Us, and his poems have appeared in numerous national and international literary journals, magazines such as The New Laurel Review, Trumpet, The Poetry Box, Verse on the Vine, Lummox Press, Sacramento Voices, Red Fez, and on cocktail napkins everywhere.
www.toddcirillo.com

Poems cited here are assumed to be under copyright by the poet and/or publisher.  They are shown here for publicity and review purposes.  For any other kind of re-use of these poems, please contact the listed publishers for permission.
We here at TBOP are technically deficient and rely on our bashful Milo to fix everything.  We received notice from Google that we were using "cookies"
and that for our readers in Europe there had to be notification of the use of those "cookies.  Please be aware that TBOP may employ the use of some "cookies" (whatever they are) and you should take that into consideration
Posted by Today's book of poetry at 6:20 AM