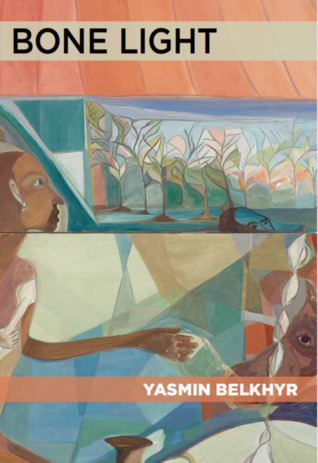 Yasmin Belkhyr's first poems hit you like a sequence of surrealist dreams — but in these dreams, enough is familiar to the reader that reasonable assumptions can be made.

Bone Light is where hearts get ripped out of your dreams.  Not romantic love-hearts; bloody muscles pulsing red, hot and wet.  Yasmin has seen the chicken clucking shortly before being introduced to the pot, the red meat walking by moments before hitting the grill.  These poems, in themselves, are not metaphor but fact.

Belkhyr's youthful persona is a presence in Bone Light as is a shimmering beginning to the first calls of sensuality.  But Belkhyr has a bigger purpose in mind.  These poems bridge continents and cultures; Morocco is in these poems, Yasmin is from Morocco, but so is America.

Interlude with Forgotten Myth, or,
Portrait of Ibrahim's Daughter

I have a recurring dream in which my father breaks the neck of every pigeon
in the park. I help: a good daughter. I snatch them from the air & tear out the
feathers. Bloody. In the stories, there was a king named Ibrahim & he loved
his god. No one calls me foreign but I know that's what they mean. In the
stories, girls like me sweat out the fevers, drop dirty guns in the trash chute.
We rip the rabbit's heart right out of its fucking chest. All the red-soaked
skin under our fingernails. All I do is think about stories. About history, or
his story, or her story, or my story. They're all the same story really. Someone
always ends up holding something mangled.

"Someone always ends up holding something mangled."- Belkhyr

That's a line Today's book of poetry wants to remember.  Maybe even borrow.

Today's book of poetry loved how these short prose poems performed.  In concise form with a language collected from several shores Belkhyr dropped poetry bomb after poetry bomb until our score card ran out of spaces for check marks.  Yasmin Belkhyr reached blast velocity with the first poem in this splendid collection and never took her hand off of the throttle.

Yasmin Belkhyr has taken some of the titles in Bone Light from the sacred text of the Quran, others from the mouths of Moroccan women of experience.  Today's book of poetry sees no dogmatic pretense behind any of these slick poems.  Belkhyr makes her blind turns with her foot on the gas and a tight grip, fingers splayed, on the hand-brake.

I don't own any mirrors. In sleep, I scrape ticks off the windows. Once, a bird
startled itself into the apartment and I was alone. If I throw a nickel off the
bridge, I'm thinking about my niece. While the city slept, sound dripped slow
down the street. An unnatural thing. The festering mess to suddenly damped
and quiet. None of the wounded dogs moaned. None of the children woke
curled around ghosts. During the day, I wore a loose dress and bought pastries
from a bakery and thought of all the people I'd like to touch. At night, I
imagined the ways I could sink. My little fears and aches, the stupid rust in
my chest. Define: daughter. Define: obligation. Define: heartless. I swear, I'd
be better if I could. The girl was named Rumisa and I read to her in English
and that's all you need to know.

Today's morning read was a typical early Monday morning fiasco.  Thankfully Yasmin Belkhyr's taught and tender poems brought out the best in each of us.  Kathryn, our Jr. Editor, jumped to the lead and started assigning poems, which was perfect.  Someone has to light the fire.

Yasmin Belkhyr reminds Today's book of poetry how much we really do not know about Africa, Morocco, women.  Belkhyr and the other poets (Victoria Adukwei Bulley, Mary-Alice Daniel, Chekwebe O. Danladi, Len Bezawork Gronlund, Ashley Makue, Momtaza Mehri, Famia Nkansa, Ejiofor Ugwu, chimwemwe Undi) from The New Generation African Poets series are going to clear some of that up for us.

& We Have Never Owned Casablanca

It's hard to find work, a man on the train tells me. He asks if I am married,
if I have a boyfriend. I'm seeing someone, I lie. We are cramped together in
the doorway, late August, the train a bullet streaking to the airport. My
suitcases are between us, his mother sitting beside the door. Miles sweep by,
sea becoming country becoming city becoming sea again. Here, it all leads to
water. They're building a new city. Between Kenitra and Mehdia,he says. Piece
by piece, the cities reach for each other. The train jolts: he grabs my arm, steadies
me, horribly intimate. I could build, he says, but my hands are too soft. Outside
the window, a flash of children chase chickens in a grassless yard. Do you like
strong men? He has a stain on his shirt and moist palms. His mother smiles
at me, squeezes her son's arm. She offers me a warm date, a firm strawberry.
I think you are very beautiful, he says, What is your name? The train slows to a
stop: outside, the waves thrash against the rocks, beating them smooth.

Yasmin Belkhyr can sound like she is treading carefully, walking softly, but that's just the invitation, the ticket in.  Once you are in Belkhyr world she will rattle your cage.  Bone Light is a delight for poetry addicts like Today's book of poetry.  We can't wait to see what she does next.

ABOUT THE AUTHOR
Yasmin writes. She was born in Salé, Morocco, grew up in NYC, and now lives and studies in Amherst, Massachusetts. You can read some of her published poems here. Her chapbook Bone Light was published in 2017 by the African Poetry Book Fund and Akashic Books. In 2013, Yasmin founded Winter Tangerine, an independent literary and arts journal. She now acts as the Editor-in-Chief. She is also the founder and EIC of Honeysuckle Press.

BLURBS
"Across dreamscapes, across landscapes of Morocco and America, across layers of memory and emotion, Belkhyr deftly writes through complicated imagery and reflections.... In the compact space of a chapbook, Bone Light demonstrates Belkhyr as a bold and necessary voice."
— Emily Corwin, Monstering Magazine

"What is delightful is how quickly the poet establishes her sense of layered narrative in the book and the effect it exerts on her poems. Throughout the book, Belkhyr influences through this kind of manipulation, which transforms her poems into vehicles that draw readers in, as water is attracted to travel through every crevice it ultimately passes."
— Bruce Arlen Wasserman, New York Journal of Books