Today's book of poetry is going to apologize right off the top, for the life of our research staff, and believe me, lives were at stake, we could not find out where Otata's Bookshelf originates.  Didn't stop of us from adoring the poetry of John Levy though.

"Let's talk about the weather, the earth
says with flowers."
Home,Tucson

This is going to be one of those poems
that goes on and on and calls. . .
calls itself a poem, looking in

or from the ass backwards perspective,
a poem written on a Sunday afternoon, the sun

up and my wife walking
the dogs around the yard,
the poem is about to say it is going

I’m seeing it as a child from a distance.
The flat
nowhere with the dried-up stream

of consciousness and the brief
bridge over the dried-up stream the poem
goes over, so fast you miss it if you glance at your wrist-

watch
or at the floor or at the sky or your palm, sore
finger or old shoe. This poem is going
to say almost nothing and the almost

is itself close to nothing in many ways,
ways no one will bother to count because
the poem keeps going and there’s

no time to count much beyond one
line after another and it would be
pointless to begin counting anything as the poem,

say, preens a moment in the mirror, passing
a stanza over its body in what could be mistaken
for a caress, but it turns out is just a scratch—

the itch about the size of the dot above the lower
case i. This poem circles that dot
and rejoices in the space around it.

This poem, in fact, is primarily about that space
and how the space
looks in the mirror around it, the legendary

negative space. This poem is going to say
almost nothing about what’s positive about
the negative space, or almost

positive, or fractionally, though now it finds
a sliver of positivity and then another, using them
like rails in a train track. Stand back.

Levy had Today's book of poetry laughing out loud and for the best reasons.  John Levy is all about managing "the negative space."  Ha.  Levy 's autobiographical narratives are joined by utterly fabulous flights of fancy.  In On Its Edge, Tilted John Levy becomes whomever he chooses by whim.  One minutes he's Pablo Picasso and the next he's fulfilling Pablo Neruda's fancy by interviewing his spider.  Marvelous.

I was glancing at the man in line
behind me in this bank when he
pulled out a flask and took a drink.
He offered it to me and no one
watched as I downed whatever it was
it tasted like grimace with toffee at first

then orange notes followed by
caramel and barley. It warmed, no,
burned, no, increased my mass, but
then the ceiling sparkled and a mother two people
behind me told her little girl that everyone

has been wrong, very very wrong, and the earth
is flat. The man pried the flask from my grip
as the teller waved him over even though, as I
carefully noted earlier, he was behind me.
At first I thought it was me the teller wanted to

snub—”snub” is too short a word for how I felt myself
wobble, massively, at the insult of having the smiling
teller use all five fingers of a hand to neglect my
Being. The after-

taste, a touch of dried flower petals, black pepper, tobacco
leaf and chocolate was no consolation when I viewed the man
pass the flask to the teller, which she took with the very same
fingered hand she’d waved in the atmosphere. The view

was nearly identical to looking through pillars at the Acropolis
if the Acropolis were a bank and we were all tourists
so none of us spoke Greek. The girl, inches behind me now,
guffawed after her mother whispered loudly, “Some men are

invisible, darling, and to think
that they can help it
is very very wrong.”

On Its Edge, Tilted has it all, love stories, instructional video, bad weather and so on.  What attracted Today's book of poetry was that there is hope in here as well.

Our morning read was a vivacious affair.  Any poet who mentions W.H. Auden's "Musee des beaux arts" with serious intent and respect, well, that poet gets our full attention.  Today's book of poetry continues to maintain, respectfully, that Sir W.H. Auden's "Musee des beaux arts" is one of our greatest poems.  It's certainly near the top of the charts.

Milo, our head tech, took the lead with this mornings reading.  Milo's recent reading has included Auden so his poetry eyes opened up big when reading Levy's On Its Edge, Tilted.  This isn't meant to distract you readers, Levy doesn't actually spend much time on Auden or anyone else, Today's book of poetry just appreciated the mention of one of our hero's.  Levy himself is a train, keeps a steady head of steam and arrives on time and fully loaded with every poem.

As you know, sometimes I blather. What
is her doing in blather, near the nonsense of
blat, like a husband and wife, like us. You're
the dear one, next to a blat, the dear one
who gives birth. You gave birth
to our two children, an act of giving,
to them and to us. You made me
a father and brought them onto
this planet and you love them before you
think of yourself. I send you this postcard
with one word on the other side, LOVE,
hand-painted, seeming to rise above
all else, all upper case because you
keep it up so skillfully, so
carefully, with such kindness.

Today's book of poetry was delighted to end today's blather with a love poem/postcard.  Like Today's book of poetry, John Levy appears to love poetry, but loves his wife most.  Levy never walks and talk maudlin or saccharine, but he hits the poetry heart square on every time he tries.

Mr. John Levy will be welcome here anytime, Today's book of poetry liked how he handled it all. 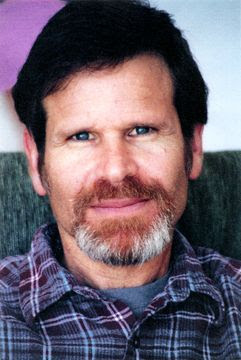 ABOUT THE AUTHOR
Posted by Today's book of poetry at 8:02 AM