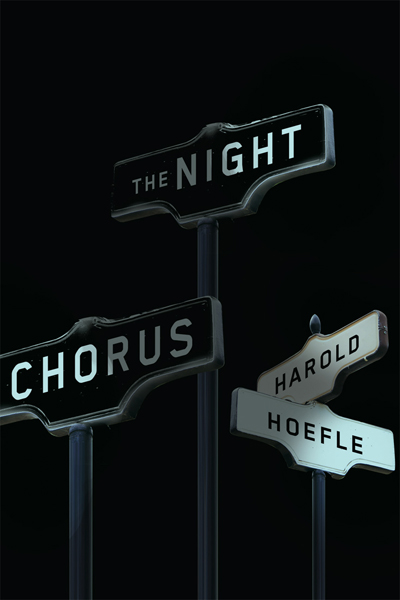 The older we get here at Today's book of poetry the more we forget what we are trying to remember.  To the best of our bad memory Harold Hoefle showed up at my farm house door when I was guarding the Stanhope/Grand Tracadie border in Prince Edward Island.  Harold and I shared a mutual friend, Sir Patrik of Hunt, whose word was gold.  This was back around 1985, I think, and Harold Hoefle was a long distance runner at the time.

Since then Mr. Hoefle has shown up periodically, over the years, but the last I heard he was writing prose.  When The Night Chorus arrived here at Today's book of poetry we were surprised, but then not surprised at all.  It finally makes sense, that old Harold Hoefle had been a poet all along.

The Night Chorus reminds Today's book of poetry of younger days, sitting across a table, from one of those people.  You know the ones I mean.  The story tellers.  Those folks who know something you don't, but need too.

At least it's not dripping off the kitchen table,
the wet cereal of my brain, but the font room's got
my Kyla and Jimbo, I hope not messy like me,
and he's already gone, he off-ed right off,
the screen door banging at that orange moon,
and it was so him to do us after dark,
but that's my Brian, it's like I married
every nasty bit in the ten o'clock news.
Good that he called 911 (someone should mop),
though now for-sure he's barrelling out of town,
whipping along the ditch with a bottle in his crotch...
and isn't cereal a weird word? I am (was) serial,
as in serially attracted to the Brians,
thrones who chug whisky like beer,
who brag I'll sleep when I'm dead - those guys.
So there's me with my loser beacon. Yvonne told me,
blonde to blonde, party girl to party girl.
She opened and shut her fist in my face,
said that's your forehead winking at crazies.
Guess it's true, I could never get past men like him,
as if Brian were just the end product, exactly that,
but he's the one I chose, the one with the wooden bat,
taking down the world that tried to take him down,
and starting right at home with a big wind-up,
a smooth swing, and a loving follow-through.

Wouldn't you know it, Harold Hoefle has a poem in memory of another Canadian poet, Judith Fitzgerald, and Today's book of poetry was reminded of our brief acquaintance with Ms. Fitzgerald.  Judith was generous and supportive at a time when there wasn't much in the way of support for our poetry.  It went a long way.  Fitzgerald, like many of us, was tortured by parts of her life.  Harold Hoefle swims up that river in his poem "Death of a Poet", but he comes out clean on the other end by adding a glimmer of hope, a glimmer where none existed.

Death of a Poet

Your life was lightning. You struck a room,
flushed and flamed every cheek, then turned away
from the burning stumps of all who wanted you,
smoke curling like your hair in summer.

Childhood: yours was not green buds, soft air.
Hunger tore at you and your siblings; the mother
never there. So you scavenged alleys: the bins,
the cans. Fear and weakness fed on you.

Your poems, the postcard rooms you lived in,
the angles of a minute-by-minute existence
jutting out and in: your life was Cubist.
One edge was a writer's yard,
the deck of that lakeside A-frame where,
below the maples, the poets heard
you read and make comments, shared laughs,
but mostly stared -gamine, sylph, sibyl?
Like others, the poets wanted more:
the thighs you crossed, the hair you tossed.
The winning moves you learned from loss.

The crack of a bat was something
you also knew. In bars, at parties,
your tongue could sever anyone, but when
church bells tolled at twilight - off you'd run
to be alone, to stand shadow.

At a Windsor desk, your lookout on the slow river,
you'd watch boats pass and water ride the shore.
You thought of people you knew, or had known:
that carousel of friend/contact/met-once/ex-something.
One memory remained: the man you loved the most,
whose torment kept his own hands at his throat.

It's after two on a dull, December day.
But you'd be right at home with these muted tones
of cat-grey, ochre; of wet snow dripping down
the brick. Still, you had to paint the vision
in your head - blue shot through with black -
a backdrop for your own red hair and white skin.
Your only prayer: that art let you let go.

Today's book of poetry has been running hither and yon without making up much ground.  We'd been meaning to post some kind words about Mr. Hoefle for several weeks.  Life just keeps getting in the way.  There is much to be admired in Hoefle's slim volume.  You can feel Hoefle assembling his choir, his night chorus to sing against the inanity of it all.  These poems filling in emotional gaps, leaps of common and uncommon faith, all of it, tied up tightly in Hoefle's terse and vibrant poems.

The day you came back,
a leak had pouched the ceiling,
a grey drywall saucer
with a hole in the middle.
But you and I,
we drank strong tea
and talked,
the ping-pong
of word and window glance,
of fast laugh and topic switch.

After a look outside,
you said the capped waves
were angry.
And when you left
you didn't wave,
capping off
not just your thought.

I waved at your back,
my hand flopping,
as if the wrist were broken.

We're hoping Harold Hoefle will get us back on track her at Today's book of poetry.  We are expecting some big changes in the next few weeks.  We'll have to get back to you with those, so please stay tuned.

In the meantime Hoefle's The Night Chorus will meet your poetry needs.  Check it out, take it for a walk around the block.  Night music. 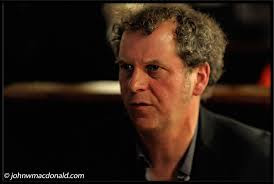 ABOUT THE POET
Harold Hoefle teaches English and Creative Writing at John Abbott College. He lives in Montreal.


DISCLAIMER
Poems cited here are assumed to be under copyright by the poet and/or publisher.  They are shown here for publicity and review purposes.  For any other kind of re-use of these poems, please contact the listed publishers for permission.