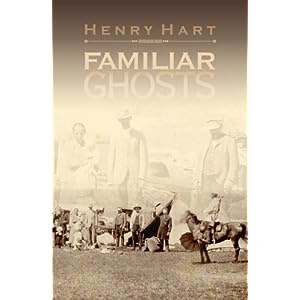 I am ready to jump on the Henry Hart bandwagon.  Sign me up.  As far as I can tell Henry Hart can eloquently wax poetic with humour, intelligence and genuine pathos - about anything that strikes his fancy.  These narrative poems unwind as though Hart had a golden spool of poetry on hand and that he just unravels at will.

Whether writing about nature and love or the ghosts of the American Civil War, Henry Hart feels the pulse of the thing, catches the right rhythm. and takes the reader in.

I stoke the stove with campers' trash,
hear coyotes break bones and bicker in the flames.
On the pond below, sunlight skates on splintered ice.
The valley breathes, but never says a word.

Without you, I'm the needle frozen in the compass,
the sunflower at the bottom of a well.

Yesterday a DJ played "All Along the Watchtower,"
joked about a CEO buying diamond umbrellas for his dog.
Light hardened summit pines in amber.
Blueberry bushes bared their nerves to frost.

Without you, I'm the needle thawing in the compass,
the sunflower at the bottom of a well.

Last summer a helicopter scooped the bond with buckets,
doused flames bushwhacking toward the tower.
Minnows flipped like silver dollars into smoke.
The sun's gray sail sank in the horizon's surf.

Without you, I'm the needle trembling in the compass,
the sunflower at the bottom of a well.

Charred runes crisscross slopes of ash.
A woodpecker drums love songs on a half-dead trunk.
Blue jays peck roasted cones for seeds.
Still the moon floats like a lotus above the mountains.

The range of Hart's poems isn't a stylistic one — no, these poems are clearly all cut from the same careful cloth — but from poem to poem Hart plows through subjects both broad and familiar, poignant and flippant (humouresly so).  Hart even manages to throw in some protest poetry.  When I say these poems all sound the same I'm doing a dis-service because reading Familiar Ghosts is a wild romp.  The voice in these poems has authority and vision and the reader gets that early on, understands that this is a voice you can follow, trust.

From the Memoir of an Amnesiac

The first person I met at the pig roast
was an ex-lobsterman from Maine.
He swore I looked like the poacher
who stole his traps and shot up his boat.

Wearing an I Swim Topless in the Arctic
t-shirt, his daughter offered me tortilla chips,
guacamole the color of gangrene.
Her claw tattoo warned me not to touch it.

"Remember me?" sang a woman in blonde tights.
"I fixed your H-drive last April." I stared
at Chinese characters on her name tag,
said something I don't remember.

A lawyer in a see-through kimono
tugged my shirt, asked if my wife
had recovered from hitting the ox.
I apologized at length for being single.

A Virginia Gazette reporter snickered:
"Ever hear the one about the dyslexic agnostic
insomniac who stayed awake each night
contemplating the existence of a dog?"

"No," I said, squeegeeing sweat from my brow.
A yoga teacher fanned me with her Braves cap,
invited me to her night class. I tried to peek
at the name dangling on her breast.

A history professor with beaded dreadlocks
quipped: "Politics in emerging democracies
is like group sex with Daughters of the American
Revolution. Laughing means you secretly agree."

I wanted to chat with him, but whiskey
had dissolved his name to a Rorschach blot.
Picking at the label on my Samuel Adams
under an AC vent, I felt an Arctic breeze

swirl through the first snow cave
I dug on Whitethorn Mountain. How easy
to remember names when they hovered
like snowflakes around a flashlight!

A psychiatrist mopped his shaved head,
whinnied: "There was a Florida doctor
studying babies cloned from extraterrestrial
skin cells. His cousin was my patient."

A tennis coach poked him with a crutch:
"Maybe you could help my mother.
She recalls everything up to her wedding.
Her ears keep ringing but nobody answers."

The hostess interrupted: "Be adventurous.
Try the king crab and curried squid."
Cracking ice with a tongue stud,
a grad student nudged me: "Remember

that night at that bar? You said you dug
my story about homesteading in Alaska.
That's when we had no power or piped water
and Dad called our fireplace a hippie TV."

Outside, petals snowed from a pear tree.
I shivered in the cave on Whitethorn Mountain,
watched kids chase a Labradoodle with plastic bats
shouting terrible names.

The best part of doing this blog has been the discovery of new poets, Henry Hart may be my best discovery yet.  I've read Familiar Ghosts and Hart is instantly among my favourite poets.  It is a bit like the first time I read Sharon Olds, frequently putting down the book so that I can gesticulate wildly.  In my head the drone:  "Oh ya, there are people out there this good, this smart."

It's a happy, jealous discovery.

He didn't say anything,
just spat at the sidewalk,
shoved black garbage bags of clothes and crates
of books into the U-Haul,
and drove to his other woman on the coast.

She sat in a chair on their new porch roof,
stared at arabesques
of bugs under the street's one light,
waited for stars to read her
her rights, cauterize her cuts.

After the black turned blue,
the whippoorwill calling his name
from the thorn hedge,
the Doberman gnawing its chain
no longer mattered.

She climbed down the fire escape,
let the brook's soft song
lead her into the woods. By a spider
catching the sun in its net,
she knelt to sip her shadow.

Minnows stitched her face
broken by the pool's ripples.
She tore up a Jack-in-the-pulpit—
not for honey on its purple tongue,
but for roots Indians used to poison strangers.

Henry Hart is the author of three previous books of poetry: The Ghost Ship, The Rooster Mask and Background Radiation.  He is also the author of three books of criticism, and a biography of James Dickey.  Hart's poetry has won numerous awards including the Carole Weinstein Poetry Prize in 2010.

He has a new fan here.

Scour as I might I could not find video of Henry Hart.  But I did find a photo.

Orchises Press can be found at:
http://mason.gmu.edu/~lathbury/
Posted by Today's book of poetry at 9:41 AM