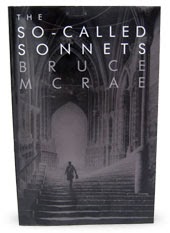 Canadian Bruce McRae offers up a book of disciplined diligence with The So-Called Sonnets.  Each of these prosaic narratives lives up to its' fourteen line commitment.  But of course these aren't traditional sonnets of the aabbccaa school.

These little free verse wonders fit the confines of the model but kind of break out at the edges in spontaneous trains of thought, McRae's nifty train rumbles right through these poems, hard on the breaks and thundering around every spark inducing turn.

It's a ring you climb in and out of
in a futile effort to master chaos.
No, says I, it's a dog's collar and leash
misrepresenting the senescent penis.
You're wrong, it's a silk noose, its knot
mocking the cheap clip-on variety.
Perhaps, I replied, or it's a thumbnail
being dragged across the throat slowly,
a space-time portal where only the head fits
through, a snare for the occasional rabbit.
You'd be right if you weren't so wrong.
It's really a border crossing, a filthy lasso,
the tattoo of a dashed line and tiny scissors
with the words 'Cut here' along it.

This isn't quite Richard Brautigan territory with whimsy, after all, McRae executes his self-imposed formal constraint of fourteen lines on all these poems.  But it has never been about the size of the canvas, the length of the song - and McRae has found a form perfectly fitted for his sharp voice.

These very artful constructions only appear casual, otherwise the discipline would have seemed forced and there is nothing forced about these sonnets.  McRae's poems are sardonic and playful and still frozen rope taut.  This isn't a pitcher who throws tricks, these are proper fastballs, wicked curves and sliders that just won't quit.

I thought it was a faucet dripping,
the tap-tapping of a blind man's cane.
I thought it was a tiny hammer in a tinier fist,
one usually found pounding on a lectern.
Like those little footsteps, gallows-bound,
each second an egg being cracked open,
each second a fissure in time and space—
big enough to drive a Mack truck through.
It reminds me of my favourite aunt,
knitting needles clicking in another room,
she tut-tutting over my latest indiscretion.
Or it's the smallest of beating horse-hearts.
The eternal breaking of the back of fleas
between the fingernails of beauty.

Technically a sonnet is a construction built on the tension between two opposing ideas or desires and does so within the chosen line form/constraint of 14 lines.  McRae  plows through a tent-load of ideas with his gleefully glib sonnets.

There are surrealist elements in some of these sonnets, sure known hard won home spun wisdom in others.  Poem after poem in this tight collection tickled by with my smile growing wider with every page.

A braid of knotted horsehair,
and I waist-deep in my immodesty.
The serpent as Mobius strip,
each new notch another day unfed.
Money for old rope, or a whip
to crack the backs of the Assyrians.
Here, the circle of suspicion.
There, the human equatorial zone.
Or, it's a portable noose, patent pending,
its buckle a handy knuckle-duster.
"Keep your pants on," my mother said,
and how I wish I'd heeded her advice,
my jeans hung down around my knees,
the river waist-high and rising.

This Too Passes - Bruce McRae


www.silencedpress.com
www.bpmcrae.com
Posted by Today's book of poetry at 7:32 AM