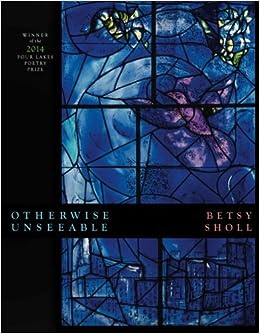 Otherwise Unseeable is the winner of the 2014 Four Lakes Poetry Prize*.

Betsy Sholl sure can throw down the line.  She can be crisp and clean and concise or she can take that long, slow dance.  Either way the reader wins.  These are accomplished poems by a very confident author.  And rightly so, as my dear friend Mary Brett would say.

The sun sets off a whole lot of vibrations...
Sometimes on the tenor I try to get a sun sound.
-RAHSAAN ROLAND KIRK

"You think I'm a clown?" He hits the switch
and the dressing room goes blind. Now who's
master of lights out, guide through the starless night?

Inside that vivid pitch, he hears flute-talk,
half goldfinch, half wheeze, hears a horn his dream
calls moon zellar, its banged-up metallic mouth.

Though sound has no weight, it needs a bell
and reed, needs muscle, breath, two puffed cheeks.
It can use a man with a bag full of horns,

willing to walk the rim between trickster
and sage, a man with the grit to keep going
if a stroke nails one hand down.

Certain sounds lie buried, heaped up, unheard,
till someone comes along with a cellar
behind his eyes, and inside that

a furnace blaze of dreams, a rush of notes
like coal shuttling into its metal house,
sound of flashlit siren-scan catching the gleam

of brash, a high C's shattered glass—
a man who says, "You want to hear sun vibes,
wind in B-flat? Well, shut your damn eyes."

This is poetry with humour, pathos, grit and eloquence.

There is a dark undercurrent at work in these poems as Sholl attempts to, as Maryse Holder said, "give sorrow words".  Sholl isn't afraid to look at our hostile nature or the bargains we make to endure.

No one's left who watched the crop
go to rot, till even its eye roots oozed.

And the stench—like something the ground
spat out, then worse, the fields caught,

infected right to the doorstep,.
knobby lumps gone to mush in the hand.

No one's let of all those who trudged
toward the sea, stomachs so hollow

they'd gladly break their teeth on.

Now at the market varieties are heaped
in bin after bin, dirt-spackled bulbs,

aortas of earth—some from Peru
called papa, so I think of my father's heart

that gave out before I knew him, arteries
clogged in early blight. Sometimes

making dinner, I lift a potato
to my ear as if even the drub

of absolute silence could be a root.
Later I drink the cooled cooking broth

as I've been taught, so nothing is lost.

Sholl's Otherwise Unseeable resonates with a jazz lover's heart and a world weary clouded humour.  These sad poems are so joyously alive.  These joyous poem are all so jazz solo sad.  Take your pick.

What I really liked was feeling swallowed by it all.  Sholl is completely committed and the reader gets that.

and a woman still dressed in last evening's
green sequinned gown looks pale, spent,
in this harsher light, as if all night

she's been chasing, reaching too far, grabbing
for any stone or shell or salted glass the tide
tumbles in. Now, without lifting her eyes,

she pushes more chips onto the felt.
Outside the city's glittering windowless rooms,
waves rise to a curl, then calmly subside.

But what if the ocean got tired
of being no more than a nightclub logo,
a peeling billboard on stilts, got tired

of people gazing through glazed fixations?
What if those green fathoms gathered themselves
into one enormous swell?

It could rage through this town,
or if it wanted, just rough up one woman
already shedding sequins along a split seam.

The rubble line's all about loss, loss rolling
through waves that toss their load of shattered dice,
loss seeping up the hem of the green gown,

but noon light gleaming on boardwalk slats,
glinting across the simmer of waves, light
erasing all but its own brilliant self.

ABOUT THE AUTHOR
Betsy Sholl is the author of seven collections of poetry, including Late Psalm and Don't Explain, 1997 winner of the Felix Pollak Prize in Poetry. A former poet laureate of Maine. Sholl teaches at the University of Southern Maine and in the MFA Program of Vermont College. She lives in Portland, Maine.

COVER BLURBS
"For a good four decades now, Betsy Sholl has been producing a poetry of stern self-reflection, risky lyrical fluency, and a deeply empathetic social consciousness. With Otherwise Unseeable, she gives us her finest collection thus far, a book which has refined itself into something I can only call wisdom—sometimes rueful, sometimes fierce. This is work in which, as one poem memorably puts it, we must 'unlatch our wounds and love our ruins.'"
-David Wojahn

"Betsy Sholl's new book, Otherwise Unseeable, is faithful, as is all her work, to the contradictions we live with from day to day.  These deeply earned, masterful poems take in the full range of human nature, looking unflinchingly at human evil and human suffering, while also acknowledging the gound-note of joy that waits to be heard in our daily lives. Sholl's poems can be elegiac and mournful; they can riff and fly on the force and spirit of their own language as they chart a path between despair and hope, making seeable what is 'otherwise unseeable,' as they give us glimpses of a 'kingdom' which is always here and always to come."
-Robert Cording

"It's a haunting thing, this new book by Betsy Sholl—a haunted sequence of grievings for the dead, dying, and otherwise unnoticed. Even lowly wildflowers—'chicory, ironweed, aster, thistle, joe-pye, /poorest of the poor'—are honored here, as is a whole horde of literal and figurative gypsies with 'a voice of pocket lint.' Haunting to is this book's tribute to music's power to build 'a bridge from verse to verse' across our ruins. This poet's erudite compassion for everyone and everything—her unwavering humanity—what a wonder that is! What a gift to us."
-Adrian Blevins

*The Four Lakes Prize in Poetry is given annually to one new book of poetry submitted by a past winner of either the Brittingham and Pollak competitions, and is selected by an editorial board comprised of poets in the University of Wisconsin’s creative writing program. Submissions to the Brittingham and Pollak competitions by previous winners are automatically considered for The Four Lakes Prize. With this prize the Press will continue to welcome poets new to the Series through its annual competitions, while supporting the winners’ further development by publishing new works.