Today's book of poetry:
Speaking of Power - The Poetry of Di Brandt - selected with an introduction by Tanis MacDonald.  Wilfrid Laurier University Press.  Waterloo, ON.  2006. 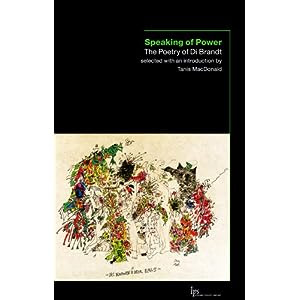 "There is what Don McKay calls "poetic intention" to the beauty and ugliness, joy and suffering, of everything around you."
Di Brandt, You pray for the rare flower to appear

Di Brandt observes, absorbs and explains our world to us in language that is both instantly recognizable and an assertion of a particular power.

let me tell you what it's like
having God for a father & Jesus
for a lover on this old mother
earth you who no longer know
the old story the part about the
Virgin being of course a myth
made up by Catholics for an easy
way out it's not that easy i can
tell you right off the old man
in his room demands bloody hard
work he with his rod & his hard
crooked staff well jesus he's
different he's a good enough lay
it's just that he prefers miracles
to fishing & sometimes i get tired
waiting all day for his bit of
magic though late at night i burn
with his fire & the old mother
shudders & quakes under us when
God's not looking.

Di Brandt's Afterword in Speaking of Power is an elegant, heartstrong and loving manifesto.  A declaration of the hows and whys of the real need to create poetry.

The Afterword alone is worth the price of admission.

"The Laurier Poetry series introduces the excitement of contemporary Canadian poetry to an audience that might not otherwise have access to it. Selected and introduced by a prominent critic, each volume presents a range of poems from across the poet's career and afterword by the poet him- or herself. Economically priced, these volumes offer readers in and out of classrooms useful, provocative, and comprehensive introductions to and contexts for a poet's work." (Laurier Poetry Series Website:  http://www.wlu.ca/press/Series/LP.shtml

Each of the Laurier Poetry Series titles is a treasure.  These volumes give the reader an educated introduction to each poet.  In Brandt's case Tanis MacDonald handles the selection and introduction with aplomb.

What is clearest in this short volume is that Brandt's clarity of vision and pure resonant voice are worth revisiting.

this is how you got
through the day.

without sleep,
without pay,

your mind bouncing
off walls,

you weren't thinking
about that.

you weren't thinking
about your stretched

you saw yourself
in the dark pool

of your baby's eyes
shining,

a goddess, the source,
the very planet.

your breaths flowing
together,

your breasts filled
with milk & honey.

all night, you were
the earth,

(later, you shrank
into an ordinary

amused by the ordinary
world,

half mother,
half not mother.

I love an honest poem and Di Brandt is all over that.  I've admired her work for a long time.  This little volume, Speaking of Power, is a good introduction to those who haven't read Di Brandt.  For those of us who have it is a good reminder of all the things the rest of us can aspire to.

ABOUT THE AUTHOR
(lifted lock, stock and barrel from Wikipedia)
Di Brandt has published eight collections of poetry:

Di Brandt's poetry has been adapted for television, radio, video, dance, sculpture and theatre. questions i asked my mother was a bestseller in Canada. Di Brandt's poetry has been the subject of numerous scholarly essays and monographs.
Di Brandt's essay collections and literary critical studies are:
Di Brandt's collaborations include:
Di Brandt's numerous prizes and recognitions include:
Di Brandt served as Poetry Editor at Prairie Fire Magazine and Contemporary Verse 2 during the 1980s and 90s. She also served as Manitoba and Prairie Rep at the League of Canadian Poets National Council and the Writers' Union of Canada National Council for several years during these same years.

www.wlupress.wlu.ca
Posted by Today's book of poetry at 8:49 AM