WINNER OF THE 2014 FELIX POLLACK PRIZE IN POETRY 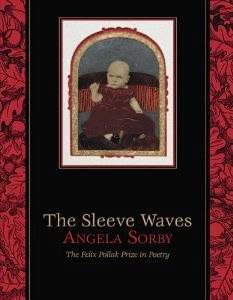 Angela Sorby is crazy talented.  These poems catapult off of the page with intelligent energy.

Party at the beach,
but J refuses to go
because he can't swim.
11 years old. All day
I watch his cuteness
break open and fall away.
He finds Etta James
on YouTube and says,
"When I'm sad, only sad
songs make me better."
Already a needle
in his heart knows
how to find the chords
for all he's missing:
direct sunlight, easy listening.
Already the wax
cylinder's spinning
its old technology of longing,
and I recognize the boys I knew
in the '80s and '90s,
who dragged me to Fallout Records
so they could "look for something."
What? It has no name, this sadness
that feels like happiness.

"...It has no name, this sadness
that feels like happiness."

Who writes that sort of line?  I could type that line, over and over, all day long.

Call me crazy, and I don't care if you do, I hear Carson McCullers in these poems, I hear Harper Lee.  It is a voice I have heard before.  Angela Sorby has the crystal clear voice of knowing.

When my grandmother
was cremated she relaxed
enough to dissolve
off the Pacific shelf,

but alive she moved
neck-deep in nerves
the way a spiny dogfish swims
even when it slumbers,

picking up electromagnetic
fields from the sea
She'd disappear
to jump off the Aurora bridge,

and though she never did,
I still sense her slow surreal
fall in my chest. She always said
Light up to make the bus come,

which makes me miss smoking,
how it fills the lungs
with poison
that feels like heaven:

one suck on a Winston
will draw the Ballard #10,
its driver seeking
fire in the fog.

Sorby's poems are smart the way you wish you were smart.  Clever, witty, informed.  The Sleeve Waves has plenty to say about Sylvia Plath, Anne Sexton, H.D. harmonicas, politics, and a strange comforting litany of things you didn't know you needed to know until you opened these pages.

In medieval allegories,
Death's like us, but smarter.
He covers his face

to block his rank
odor. Last night
a raccoon-corpse

flooded the yard.
No visible body,
just a scent so fishy

it plunged us
into a pre-human
anoxic ocean. We fought

to breathe.
Why didn't we go indoors?
Why did we sit

in deck chairs
letting it come—
this wave we couldn't begin

to grasp
with our tiny
opposable thumbs?

Couldn't find a video of Angela Sorby so I will treat you readers to a fourth poem that is hilarious, musical and masterful.  Sorby can be sublime and sassy at the same time.  There is nothing better than smart.

David Shields appears
on PBS to proclaim
the death of the novel,

but I always knew
the library was a repository
of corpses. By third

grade their silence
attracted: so pasty, so inky,
so compliantly unreal,

so unlike the reconstituted
orange juice smell
that took dominion

over us children
recalling our obligation
to grow, to thrive, to speak.

The novel, bloodless
and cadaverous,
could keep secrets

grave-deep,
which is why it's tempting
to worship trees:

from sap to text—
the second-best kind
of little death.

Angela Sorby has a totally bemused and adoring new fan in Ottawa.

ABOUT THE AUTHOR
Angela Sorby is an associate professor of English at Marquette University. She is the author of three books: Distance Learning: Poems; Schoolroom Poets: Childhood, Performance, and the Place of American Poetry; and Bird Skin Coat, winner of the 2009 Brittingham Prize in Poetry.

COVER BLURBS
"Has anyone written a funnier, more terrifying poem about Sylvia Plath that 'Epistle?' Or caught the delicate complexities among generations better than 'A Walk across the Ice?' From Seattle to Wisconsin to Hunan, these poems register the inscape and soundscape of a mind both ferocious and generous."
—Maureen McLane

"Angela Sorby's poems move quickly, yet they contain depths: 'there's a new world floating / behind the painting,' as one says. If happiness lurks beneath sadness and vice versa, that's the point: these supple, savvy poems say the world is richer than we know and infinitely more beautiful."
—David Kirby

"Sometimes, if you're very patient and a little lucky, a set of truly original poems will jolt you upright again, and you will read their unexpected, eccentric turns, their mesmerizing content and cadence, with gratitude and amazement and feel so glad you're still alive."
—Naimi Shihab Nye,
Felix Pollack Prize judge