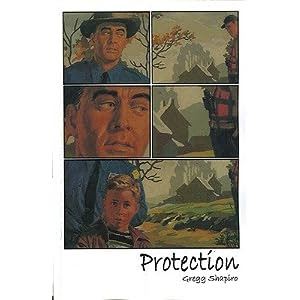 Although this book is eight years old it is brand new to me -- and as refreshing as a needed cold shower.

Protection is Gregg Shapiro's first book and it is gob-smacking good.

Today's book of poetry could talk about the LBGT references (as the acronym stood in 2008) but there is no need.  This poetry is so inclusive you might think Mr. Shapiro has been in your head playing with your thoughts.

Anyone who likes good poetry is going to love the high octane brilliance of Gregg Shapiro's dancing. Like Fred Astaire or Gene Kelly, Shapiro makes it look effortless -- but then like Fran Lebowitz -- he makes it true as a comedy howitzer.

My Mother Says The F-Word

At first, it felt like I'd been slapped across the face --
open palmed and swift. It reminded me of how she
would try to break up fights between my brother
and me, in the back seat of the car, while she was
driving. She would take her shoe off the foot that
wasn't needed for braking or accelerating and flail
around behind her on the off chance of making contact
with a flying arm or leg. This would make us laugh
so hard that we soon forgot why we had been fighting.
My father had been saying it for years, the word
coming out as easily as air. I know my mother
must have been dying to try it out for herself, slip

into it like an expensive Italian pump. I know I learned
to say it before I ever heard my father use it at the dinner
table, over the phone, in a traffic jam. He waited until
we were old enough before he spat it as us, watched us
retreat a little, than treat him like one of our schoolyard
buddies. It will take some getting used to, hearing it from
my mother's mouth. A mouth not accustomed to such
expressions or outbursts. A mouth full of praise and
kisses, outlined in Quicksilver Coral lipstick and easing
into the smile of someone who knows they're too old
to have their mouth washed out with a bar of soap.

Shapiro writes little screenplays to movies we all want to see.  His cinematic vision
and technicolour detail suggest a deep well that he has access to.

Some of these poems read like great morality plays with sitcom laugh-tracks and good lighting with   Shapiro, the expert puppet master seeing all.

And sex.  There is lots and lots of sex.  For the most part, joyous and loving, playful and celebratory.

Looking at the Ceiling

Rug burns on my elbows, tailbone, shoulder
blades, scalp. Burn for burn, I still come
out ahead. Wonder how I can go to the beach,
take off my shirt in public (everyone will
know!). I will lie on my back, basted in
sunblock, naming clouds. For now, I will lie
on the sand-colored carpet, stare at the galaxy

of water spots on the ceiling. Cobwebs
are moonbeams, jutting out from the light
fixture. Your face is a planet orbiting mine,
light years away. Our lips collide, tongues
tangle, teeth clack like a meteor shower.
Satellite hands, you are out of this world.
Tell me again about the big bang theory.

Shapiro is a details guy, he illuminates the general conception of things by reducing them to the moments of  human nuance that we all understand.  This is a very good skill to have.

Today's book of poetry was happy-shocked by this book.

The boss's wife comes to me with secrets
I must take to heart, to my grave, beyond.
Spilling from lips, thick with red. Punctuated
by brown eyes darting, silent clicks in code.

Facts to be filed, stored for future reference.
She told me that she broke down in the shower.
Crumpled into a heap of steam, salt and water.
Her dreams kept me awake at night. Vivid dreams

of forbidden addictions, another life. Now I know
why February can be as cruel as April. Twenty-eight
days, mimicked by March, with little or no chance
for improvement. Just the promise of white going
gray, hardening like cement. 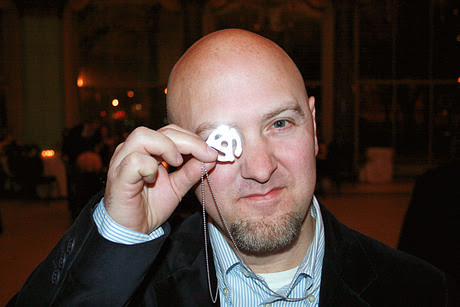 ABOUT THE AUTHOR
Gregg Shapiro is one of the leading literary figures in Chicago’s gay and lesbian communities and an influential critic of the literary and musical arts.

Locally, his work has been published in Outlines, Nightlines, En La Vida, BLACKlines, and Gay Chicago Magazine. His music commentaries are heard on LesBiGay Radio.

Shapiro has worked tirelessly to increase awareness of Chicago’s gay, lesbian, bisexual, and transgendered literary excellence, both within local sexual-minority communities and beyond them. He has been a member of the New Town Writers and the SoPo Writers groups and has organized readings for them. He has supported Gerber/Hart Library through benefit readings and through donations of signed first editions and manuscripts. He has been a participating writer and performer in arts festivals, and adaptations of his works have been produced at Puszh Studios and Bailiwick Repertory theaters.

Though quiet and unassuming, he has received national recognition for his own poetry and fiction. His works were heralded on the cover of Christopher Street, the gay literary publication of the 1980s and early 1990s, and some of them have been featured on Dial-A-Poem Chicago. His works have appeared in more than 50 literary journals and in more than half a dozen anthologies.

Shapiro’s expertise in popular music is widely recognized. He has been a judge at the Gay and Lesbian American Music Awards for the past three years. He has presented workshops and been on panels at the annual OutWrite conferences. In Chicago, he has taught workshops and judged student work at Columbia College and in the Art Institute of Chicago’s Master of Fine Arts writing program. He has also organized group readings and panel discussions at local bookstores.

At every event in which he is involved, Shapiro strives to include representation from all sectors of Chicago’s sexual-minority communities. He is one of Chicago’s most honored openly gay writers and has long promoted recognition of the city’s lesbian, gay, bisexual, and transgendered literary and musical talent.

*Please note that this bio was reproduced directly from the Chicago Gay and Lesbian Hall of Fame website:  http://www.glhalloffame.org/index.pl?item=133&todo=view_item

BLURBS
"Moving across the country, Gregg Shapiro finds his poetry on the same highway traveled before him by Henry Miller and John Rechy - at the intersection of sex and night, the place where the brakes go out."
Carol Anshaw, author of Aquamarine, Seven Moves and Lucky in the Corner

"Gregg Shapiro's stunning debut marks the arrival of a new master poet on the scene.  His work blows me away."
Greg Herren, author Mardi Gras Mambo, Jackson Square Jazz and others.