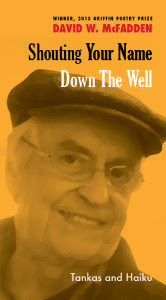 Shouting Your Name Down The Well is a completely delightful encore.  This time out he is exploring the Japanese forms of tanka and haiku.  McFadden would seem to be a bottomless well of excellent poetry.

I've met the man a few times and am always surprised.  I keep expecting to see a giant lumber gracefully into the room rubbing his knowledgeable noggin on the ceiling.  Instead, this gentle, humble man, carefully disguised genius.

Today's book of poetry is going to let other Canadian poets tell you what they think:

"David McFadden is such an essential writer for us. His wonderful poems before and after Gypsy Guitar, his great Trip Around the Lakes series, feel to me the central unofficial voice of our time. He has always kept us close to the earth with his humour and his wandering off the beaten path of literature."
MICHAEL ONDAATJE

I was on one of
Those happy drugs for three months
And liked it okay.
But soon I got nostalgic
For a little misery.

"David McFadden's poems come across as passages in a long, thoughtful, roaming conversation about matters no less deeply serious for sometimes being utterly frivolous. As the title of one of his books, There'll Be Another, suggests, it all seems easy--this stroll from one poem to the next, this leap between stanzas--but that's part of McFadden's art. There won't be another like him.  Let's treasure the one we've got; the conversation of his poems includes us."
STEPHANIE BOLSTER

...
Tanka is to me
As bicycles to Curnoe.
His friends kept thinking
This was the end of the line
But it was merely the start.

"Dave McFadden's attention to writing has always been top-notch, right from when he published Mountain magazine in the early '60s through many years of a wide range of poetry, prose, teaching, editing, and just being open to the beauty of language. In my generation he's a master."
FRED WAH

Give me those who aren't
Afraid to say "I don't know."
You can have the rest.

"His words would rip a hole in the night."
LILLIAN NECAKOV

When you're ninety, say
Grandma, people you haven't
Seen in fifty years
Appear so real in your dreams
You can reach out and touch them.

"David McFadden has won every book prize ever lodged in a secret corner of everyone's heart, his acceptance speech echoing in our heads."
GEORGE BOWERING

Turns out the love in
Love songs is true. Everything
Will last forever.
The wind blows a gust of rain
All over my desk and me.

When I was a kid
I could walk so quietly
Through the woods that once
Without any warning I
Saw a dozen dozing deer.

"The world is full of wonder, but this can be easily forgotten. The poetry of David W. McFadden is a manual for restoring that sense of wonder. I'm quite certain reading it has improved my life tremendously."
PAUL VERMEERSCH

"David McFadden is one of the purest and most radiant poetic souls of our time."
STEVE VENRIGHT

The poems we write
After the Holocaust must
Be the type Hitler
Would have despised, that would have
Had us put in cattle cars.

"I feel like writing the most wild / and humble poems in the world / but David had already written them."
SUSAN MUSGRAVE

I'm a subjective
Man. I never ask questions.
I just work it out.

Today's book of poetry could go on forever with both David McFadden poems and the gushing voices of so many other Canadian poets,  But you get the idea.  McFadden is a poet that other poets love.

Stuart Ross continues to champion some of our best poetry with his imprint for Mansfield Press. 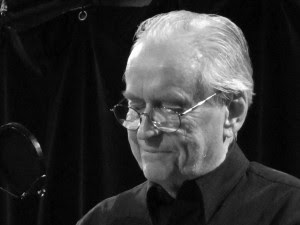 ABOUT THE AUTHOR
David W. McFadden has been publishing poetry since the early 1960s. He is the author of about thirty books of poetry, fiction, and travel writing. Why Are You So Sad? Selected Poems of David W. McFadden (Insomniac Press) was shortlisted for the 2008 Griffin Prize for Poetry, and Be Calm, Honey (Mansfield Press) was short-listed for the 2009 Governor General's Award for Poetry (his third such nomination). In 2013, What's the Score? (Mansfield Press) won the Griffin Prize for Poetry. David lives in Toronto.


The Griffin Poetry Prize - 2013
David W. McFadden
reading "It's Not Funny Anymore"
from What's the Score?