For Your Own Good - Leah Horlick (Caitlin Press)

If a collection of poetry starts with a quote from Sharon Olds I generally sit up a bit straighter and pay a little more attention.  Sharon Olds holds a lot of weight at Today's book of poetry.

We've always believed the maxim that what you read isn't as interesting as what you read twice.  We read Sharon Olds every chance we get.  And now we'll do the same with Leah Horlick.  Not for using the Olds blurb, no, for hammer and chiseling this heart of darkness to share with us.

There's an alleyway, and a secret place,
and you know it's right because the books

tell you as an invert, all your love stories begin
in hiding. And you love her because she is angles

and shoulders, twin blue yard lights for eyes. How her teeth gleam
sharp when she throws those hoops in the air, how the listeners

leap to twist through them, flames so close they singe
your hair. She wears a horse's bridle on her

left wrist to signal she is not to be kept, and she blisters
under its chafe. One night you reel her

into a corner with a bandage. She says she thought you
were going to kiss her, she doesn't love women

but anything could happen. She has a talent, dreams
the future, won't reveal the one

that wakes her with you in it. But it's closing night. She has an empty
seat, passenger side, with your name on it. You say of course,

because you have a backpack, a matching ring of red
skin around your wrist, and you thought you'd never find her.

These poems blister gentle as they get under your skin.  Leah Horlick is doing us all a favour in For Your Own Good, these poems snap you alert like the first crack from Billy the Kid's pistol.

Let me take another shot at that -- I was thinking about the German film Lola und Bilidikid (Lola and Billy the Kid, 1999).  In that spectacular film, Lola and Bili are fighting a battle of sexual identity in a world that is not openly welcome to their particular disparity.

Leah Horlick's poems are a coming of age tapestry of punk circus and shadowed violence colliding in a rich vein of sexual tension.  These poems trace a journey through self doubt brought about by sexual abuse.  Our protagonist moves quickly through the animated joy of her first sexual discovery headlong into an abusive relationship that deteriorates into a dismal hell.

These poems delve into that murky water of guilt and desire and fear, but even at the lowest ebb you always sense that Horlick is swimming towards clear, clean water.

That morning in the motel
where your best friend lived,
new snow outside, at least in the memory

and the stranger--he was eighteen,
you were alone, she was downstairs
at the pop machine or something

while you watched the snow, the nest
of beached antlers in the yard
behind the pine trees and then he was there, too

in the room, telling you about
a guitar, or something useless
and you thought

empty room, you thought quiet house
you were a very smart girl and you felt
the footstep he took one step closer behind you

at the window, and from the rising star
of your gut you heard it, like twin
drops of water--you have to leave the room

Right. Now. And quietly, and you did.
That was smart. You were a smart
girl, and you did not tell anyone

not when they found out he was
in her room at night, not
when they sent him away, not

until you were a grown woman, and what
you wouldn't give
for that little voice again, now

Leah Horlick's For Your Own Good may be the best book of poetry to come out of Canada this year. I've read hundreds of 'em and this is as good as any,  Had the rest of the staff read it out loud.  Great, now Milo is in a funk, two other interns are crying, that might be over something else.  But consensus was excellent.

Fran Lebowitz and Sharon Olds.  I can't throw out any higher compliments.

In the dream of the new house, I have my own window
facing west; cherry blossom and fig trees,

monkey puzzle and magnolia. Everything flowers.
Whatever city this is will be good to me.

And then, the crows, tiny shreds of black cloth
thrown over the sunset, and I think the world

is ending. A kind hand tells me, this is the largest murder
in North America. If I ride my bike far enough,

I can roost with them at night, east beneath the mountain.
A stray crow wings away from the path of feathers, back

towards the squares of land I imagine, flat and brooding.
You're going the wrong way, crow! Come Back!

But she was never really going, and I watch as she returns
with that other bird, as dark and near as her own shadow.

This is a book about survival.  And survive Horlick does.  It's the reader who is in danger of being spun out of control.  These fierce poems deserve your attention. 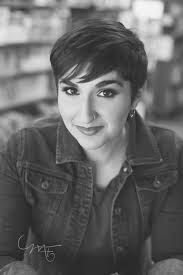 ABOUT THE AUTHOR
Leah Horlick is a writer and poet from Saskatoon. A 2012 Lambda Literary Fellow in Poetry, she holds an MFA in creative writing from the University of British Columbia. Her first collection of poetry, Riot Lung (Thistledown Press, 2012), was shortlisted for a 2013 ReLit Award and a Saskatchewan Book Award. Her second collection, For Your Own Good, comes out Spring 2015. She lives on Unceded Coast Salish Territories in Vancouver, where she co-curates REVERB, a queer and anti-oppressive reading series.

“It is not often that a collection of poems can be read like a book; For You Own Good will grab you by the collar and demand consumption. It is a page turner in the most literal sense of the term…readers will venture through the narrator’s experiences with enough ease to make it consumable and enough complication to leave room for thought and interpretation. The more you read, the more you want to read. You will feel what she feels. You will want for her to heal, but you will know she may not. You will find solace in her escape, but you will feel the anguish of her past as it remains in her present. But, still, you read because you are invested in her journey.”
–Emily McGaughy, After Ellen
“Arresting poems…[these] impassioned but meditative pieces explore uneven power dynamics and the confused interior life of the solitary young woman who blames herself and is trying to make sense of a suddenly restrictive and harmful relationship.”
–Brett Josef Grubisic, Xtra West

“Sometimes it feels as though there are Poems About Important Issues and Good Poems, and the two camps rarely meet. For Your Own Good is a startling combination of the two, skillful poems both defiant and self-aware, and close to my femme heart. We need this book.”
–Zoe Whittall, Holding Still for as Long as Possible
“‘Magic,’ which is the title of one of the poems in this collection, is a word I’d use to describe Leah Horlick’s work. Each piece takes us through a transmutation–from frightened girl to woman, from lover to abuser, from audience to performer, from alone to beloved. Horlick doesn’t back away from hard realities, deep longing or fierce desire, and drapes language around them like fitted silk–revealing and reflecting.”
–Jewelle Gomez, author of Waiting for Giovanni

‘These poems are beautiful. Solid and glittering as ice or crystal, they hold secrets and hard truths in their core. The wonder and lushness of Horlick’s voice imparts a loveliness to countless hidden tragedies, never sugaring them but bearing an elegant, whispering witness.”
–Michelle Tea, author of How to Grow Up

“Leah Horlick’s most recent collection of poetry is a beautiful rendering of grief, love and survival. This poignant poetic offering left me feeling the sensitive grace of her words long after I finished reading. The way she weaves stories into poetry is both haunting and powerful, elegant and unsettling. While reading, I had to keep reminding myself to breathe!”
–Lishai Peel, author of Why Birds and Wolves Don’t Trade Stones