Winner of The Felix Pollak Prize in Poetry 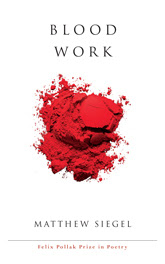 Matthew Siegel bleeds sad and tragic/romantic all over every page of this fine book.  Sometimes his mother's blood does a Stanley Kubrick moment from The Shining, the walls all glimmering crimson.

Siegel is engaged in a battle with blood and body that he cannot win, only endure.

The poems in Blood Work go in like a quick/smart/sharp prick from an experienced and talented nurse taking blood - but they linger like bruises, both big and bigger.

We here at Today's book of poetry aren't the only admirers of Siegel.  A goodly number of these poems have appeared in journals and magazines of note.  It is no wonder, these poems are tight and often tender, never maudlin and thank our lucky stars, Siegel has a sense of humour.  Poetry without some humour can be a grim ride.

"Fox Goes to the Fox Hospital"

And look there he is back in the hospital
in the easy blue dressing gown, at this facility
with a delicate floral print on the walls.
He'd always had an affinity for flowers.
Healthy yet being repaired, he is back
in this gown and it is like an old costume
pulled out of a locked trunk in the attic
of bad dreams. In the gown he feels naked,
notices his softness, how his sex has never seemed
less willing
to rise. As if there could be such a cause in this place.
He is healthy but writing a poem.
It is called "going back to the hospital" and written
in lowercase, most notably the first person "I"
which so often had stood properly capitalized
but for some reason today feels diminished.
He's writing a poem called "going back to the hospital"
but really he wishes he could draw a comic
featuring a small mammal version of himself.
His animal would be a fox, he decides, and promptly
changes the title to "fox goes to the fox hospital."

Today in our office, here at Today's book of poetry, we are listening to Dexter Gordon's sublime One Flight Up.  In particular we have been listening to the song "Tanya".  Milo is complaining because we will not give him equal time for whatever German-march-techno-blackhead-death-funk he has most recently discovered.  Milo is one strange cat, but he's beautiful and brilliant.  And today even Milo liked the poetry, he called it "sublime, not like Dexter, but subtle in it's own bloody way, so sad, so strong."  Milo is hard to impress.

The white sky presses a gauze pad
over my vein as the needle slips out.

The woman who draws from me smiles, always
remembers me, no matter how skinny I get.

No matter how dark the circles under my eyes,
she remembers me and how easy my veins are,

so visible, so thick, she doesn't even have to tie my arm,
but she does, and takes the smaller vein

the bigger one too easy. I don't tell her
the best to take my blood was a woman

who used to draw blood from animals,
part their fur, find their blue tap and drain.

She lets me play with my filled tubes. Can you feel
how warm they are? That's how warm you are inside

and I nod, think about condoms, tissues,
all the things that contain us but cannot.

You don't really hear any fear in the steady voice of Matthew Siegel but you feel the weariness in the bones of these poems.  The reader also learns some lessons in resilience.

This next poem is a stone-cold killer.  Wait for the ending, it falls like a feather, lands like a punch.

[In the Kitchen Mom Stands
With Her Back to Me]

In the kitchen Mom stands with her back to me
facing the window, a joint between her fingers
entranced by Enya. I ask her way she's crying
when I see a single wet trail on her cheek.

She says it is not a tear but I touch it with my finger
and taste it. It tastes like a tear, I say, but she smiles
and passes me the joint. Isn't it beautiful, she says,
it's in Gaelic, her smile as real as her pain.

Her pain that touches my chest with its fingers.
I almost want to hold the fingers but I don't, instead
I puff the joint, look out the window beside her. Rain
all day until now, the sky a dark cream color

almost backlit with orange--mist tumbles
over wet black pavement.  Her eyes, switched-off
depositories for this light, tell a story I cannot bear.
The memory of him rises with this music
and she smiles as if the hurt is the balm.

"and she smiles as if the hurt is the balm."

That is my new favourite line of poetry.  It is almost bleak enough to be an outburst from the excellent Canadian poet Eva H.D., or perhaps a line from the ghost of Edith Piaf, even a pouty Judy Garland.

And if you are paying real attention, and I am not mistaken, there might even be a nod to Ezra's Metro.  I had Milo look it up.

Siegel's Blood Work is a dark portal to a world where survive, survivor and survival all take on new meaning, they may even be tinged with hope.

And you all know how much we love any evidence of hope here at TBOP.

ABOUT THE AUTHOR
Matthew Siegel was a Wallace Stegner Fellow at Stanford University. He teaches literature and creative writing at the San Francisco Conservatory of Music.

BLURBS
“This unexpected book—a genuine contribution to the literature of illness—centers on containment: how we contain our blood, how blood is contained in tubes and vials, how sometimes we do not seem contained by our bodies, and sometimes the body seems to contain nothing, and even how in the face of control or self-reliance leaking away, we might manage to contain ourselves, to feel held, to feel held in place. The deceptive directness of Siegel’s debut is remarkable; in his capable hands, illness reveals how barely contained any human being is, and how we reach, alone and together, for whatever will hold us.”
—Mark Doty, author of Sweet Machine

“Siegel’s poems see the world with an immediacy and compassion that could only come from the decision to be vulnerable. It’s such a simple-seeming principle of poetry—yet it is as rare as hen’s teeth. I honor this young poet for the freshness and skill in these poems, his allegiance to the most unpretentious areas of experience, and his courage-teaching heart.Blood Work is a wonderful first book.”
—Tony Hoagland, author of Twenty Poems That Could Save America and Sweet Ruin

“These poems resist the dualities of lyric versus narrative, confessional versus impersonal, real against surreal, formal/improvisational, comic/sad. Matthew Siegel manages to tick off all the boxes at once, while remaining compulsively readable. The trick that he’s pulled off is to make a book that simultaneously tickles you and shakes you by the scruff of your neck.”
—Lucia Perillo, Felix Pollak Prize judge

Matthew Siegel
Reads his poem "On your birthday," featured in the fall 2013 issue of Southern Indiana Review.
video:  SolnRev