Today's book of poetry had written an entire blog/appreciation of Ben Ladouceur's absolutely incendiary first book, Otter, but I called an editorial veto to that tri-blurb blasphemy.

Instead I will start by telling you that Otter has more weight per line than any book I've read since I started this blog.

Our century brims with abstractions, with
clashes: I want to know its taste.
So I chase chocolate with white wine. pair
tilapia with a most acidic merlot.
My evening has been ghastly. I just got

Blind since Amiens, he was led
by a servant of the Red Cross
whose face, I'd wager, was something to touch.
My comrade gave a measly sermon, then
jumped. The little letter told me so. A sermon

fell with is flapping eyeless body
to the sea and still, I'd wager, adheres to the lip
that has lost blush. I'm sorry to tear
up like this. If my wife saw this despicable
spectacle, she'd punch me with her rings

on. Once, in Dvinsk, the suicide and I
found a house already deserted. Latvians
had shat on every surface before their
departure. He turned his bright face away from what
a kettle housed, locked eyes with me and spoke.

I have one son within my marriage, one without it.
How ghastly that half my pedigree shall occupy
our world, and half shall orbit. At once
we made for the nearest bed, and I'd wager
you know what we found there.

Today's book of poetry usually chooses three poems for inclusion, today I've chosen fifteen.  Otter is stunning stuff but although these poems all come from Ladouceur's very strong voice any combination of the fifteen reduced to three would most likely lead the reader to expect a different book.  I won't reproduce all fifteen, even though Milo is begging me to.  But I will share a few choice lines as appetizers:

Crickets scraped song off their bodies with their legs. "OK"

At night touch me when day breaks.  "Printout Found In Bottle Found In The River Aare"

All the most beautiful things are things we rarely feel the weight of. "Gibraltar Point"

I did love him, the crimson acne flecked across his neck, he was like a man a guillotine had made
an attempt at. "I Am In Love With Your Brother"

Now try this on:

Alone clouds refused to cohere.
They darkened the city in blotches.
They rendered the city dalmatian.

I forgot my lover on the bus.
The brakes woke him up
at Abitibi and he found work there.

All year mosquitoes bit his fumbling frame.
The bites were like Grecian constellations
seen on a clear taupe day.

My Zippo was on his person.
I was planning to quit with the smoking
but how shall I now singe the frays

of my only warm coat? When winter arrives
the mosquitoes will expire
and material will cover the bodies of men.

At least I received a blank postcard
on the birthday of my lover, its message
white on white: I am alive I am alone

I am not willing to speak. Some men
are darkened, in the long run, by sun.
Others, more quickly, by clouds.

Queer, Queer, Queer.  That is meant as a compliment to Ben.  For the rest of you it a label that you must remember and then immediately forget.  These poems are Queer, have a Queer agenda, and are great Queer poems.  Remove the label, they are just great poems.  All poems work better without labels and these gems would rise to the top of the pile in any company.

Ladouceur is an erudite Eros and these poems glitter with the sheen you get when bodies collide.
Ladouceur has no trouble at all finding the beauty regardless of the beast.

I think of Paul
Monette in a bathtub
that's in a kitchen
asking his hosts
to scour his skin pink.

Paul later held his lover
Roger as he lost his
eyesight and enough
blood to give
a fruit bowl a fulcrum.

He is ambiguous here.
Some men can get away with
ambiguity. Tonight it is best
to forget whose bowels
are whose. Whose words.

I want to lose my legs
between our chests.
That is how little
room I want to ask
the world for. I'll be home

before dawn. Home
is the word that come closest.
There's a door I will enter,
a grey bar of soap. A rosiness
I'll scrub my way to.

Ben Ladouceur has a poem titled "All Men Are Equal" and nothing could be more true.  But all poets are not created equal.  Not be a long shot.  Ben Ladouceur's remarkable debut Otter will simply push him towards the head of the class, any class. 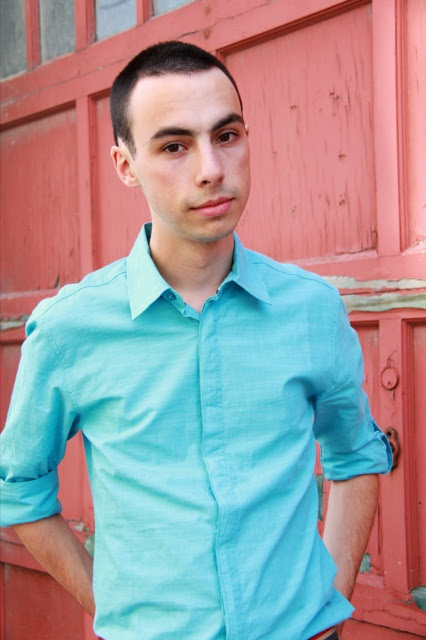 BLURB
Formally impeccable and richly imagined, Ben Ladouceur's poems track the awe of a mind as it engages with epiphanal moments, both personal and historical. His language is filtered through an intelligence that's queer and graceful, always in search of the singular phrase and a music that startles with its precision.  As each poem unfurls, keen insight gives way to the wonder of words.  Otter is a magnificent debut.
-  Eduardo C. Corral, author of Slow Lightning, winner of the Yale Younger Poets Prize