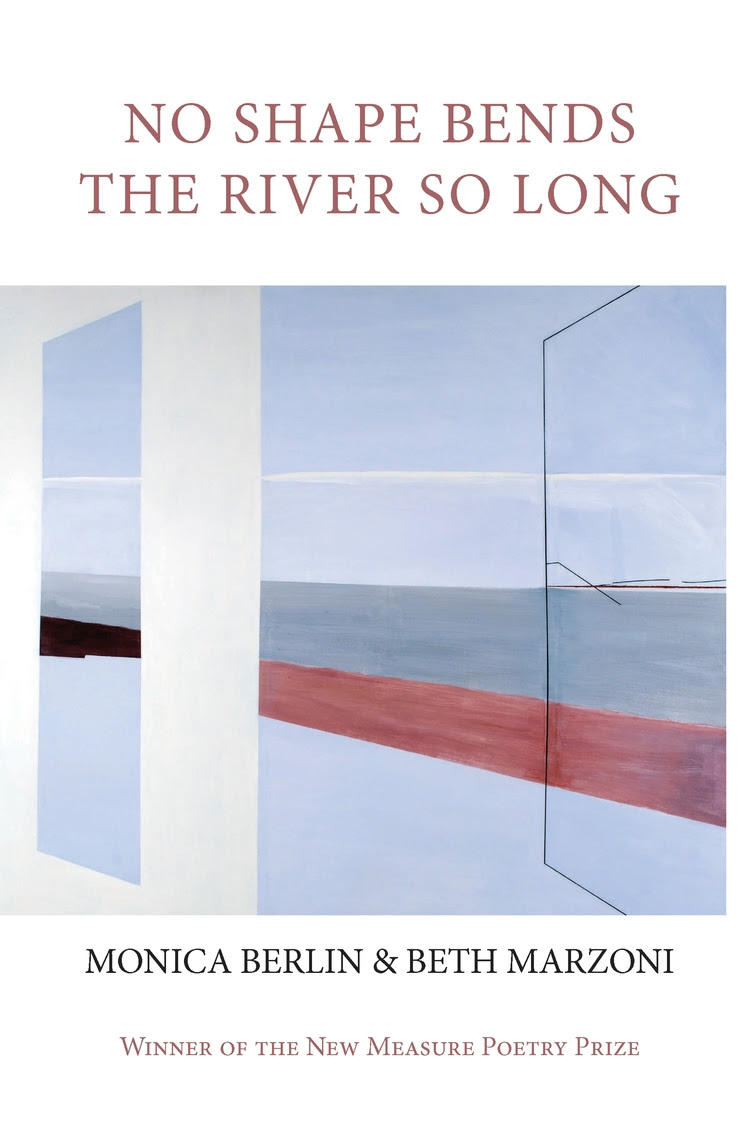 Today's book of poetry is not at all sure how No Shape Bends The River So Long was constructed. Did Monica Berlin write one line and then Beth Marzoni the next?  Did they take turns writing poems and then edit them together.  It is impossible to discern what wizardry is behind these poems.

Not quite as rare as hen's teeth but Today's book of poetry sees very, very few volumes of poetry written by two poets.  In this case the poetry is seamless, and stunning.  Marzoni and Berlin may be secret Siamese twins connected where thought begins.

Clearly Marzoni and Berlin are tributaries that merge to sing river.

Air so lousy with it everything's made heavy-thick

by the rush of alongside & what is, what
we'll hear scorched & think scoured, here

swallowed, silted. Humbled we'll corner-fold
those pages, map the measure it would take

to burn off all this too muchness. Fire has its own
idiom--its sentence turns, becomes another kind

of weather on our tongues. So, all this talk
to buttress the palate against

some awful caving in. We'd rather the music
of loss quiet. If only a needle

after the album's end. If only
a phone booth, that other era

overseas, a coin's tinny drop. If before
all sound rushes back

then every disaster we've known gathers up
that space in the static of if. As in, if the wind

turns. As in, if the rain holds
or if the bridge cannot. Then then

kicks up its storm in our chests leaden
where dishearted didn't begin but stays on.

Because fire season & then sputtered out,
because gone under & all bears down,

called or not. Edges singed or worn
thin or too saturated, because will run out

of names come winter. Because so many places
we recognize or think that we do

until the river changes its mind. Or
sixty years late & twelve miles from where

it crashed, the plane & its crew surface.
That glaciered silence heaves off any grief

The Mississippi is one mighty river and has more stories than the fish that swim beneath her waves. Berlin and Marzoni take the river metaphor in every direction at once.

And because we are water only recently free of the primordial ooze these poems draw us in like gravity.  Water only flows in one direction and in No Shape Bends The River So Long the reader is reminded again and again and again that the river makes its own path.

it might all go down: just a little shove, avulsing, just the body

but then not & this & everywhere today
spring all mixed up, birds confused, even scientists

releasing news then taking it back, say heliosphere then interstellar,
revise just farther than anywhere we've mapped. The ocean

floor they map from space so we can watch the earth
heave & sigh, watch ourselves cross the dark we push

away down the hall, down the block, across town. This town,
most any, keeps tight, a closed door, turned down

birdsong a place to close our eyes against ruin. & the flung.
the careening, the slow dissolve we call

against it & the piled-up, wreckage we'll keep
dragging to curb, to landfill, to bury.

When paved avenues again made floodway think
dam or burrow or nest, we remember invention's not

a human thing. We forget places we can walk under
water & forget nothing disappears--it just drops off

our map. Trace spreads out the atlas & physics reports less
stuff we don't understand by a tiny amount & we spread out

to find tiny, & follow the roads we'll always travel
back to iota. We should imagine something

unimaginable: begin with moonscape but then try
that water might bed down deeper places

where the sky cover is less periled, made of more
normal matter. & less periled we might know better

what to make of it & what to do with our hands.

These particularly rich and expansive poems are ripe with hope and longing even as they are heavy with the dark clouds of every storm, past and future.  Berlin and Marzoni are attempting to have a conversation with a great river, a conversation with water, for all of us.

Today's book of poetry was entirely enthralled in this conversation from the first poem to the last.
This is champion poetry.

When the rain says wait, says not so fast, says this season
we've measured in so many

stunned inches isn't yet through with us, isn't this what you wanted?

So, turn your sorry back to urgent or at least what begs
doing because there's nothing left our bodies can tend. Now every city

that banks itself against what's rising dislocated, every ramshackled-
falling-down, & the highways & the bridges bottomland, grounded low.

Made of less water we might absorb deluge, extend our limbs
to soak up at the washout, wring sopping dry, but the only body

more water than us is water & So, all at sea & maybe worse
than helpless our sad wade through the wires or anxious

waiting on the wires: that kind of course that drifts, that channel
toward lost. Even all hands on deck won't change the facts, can't

unknot: what holds us won't contain what's coming in at the breach
& won't anchor to shore. For all its translucence

we can't figure water & So, the fields
stay unplanted under so much shimmer & wave & elsewhere heavy, that

these years & then again as if out of nowhere & suddenly &
all at once our ankle-deep & that pull.

These poems strike at the American heartland, the valleys of the great Mississippi, the gaping thirsty maw of the land.  Water makes up its own mind, floods change the very shape of the land and water loves this.  Water shapes the lives of everyone that is touched by rain and Berlin and Marzoni want us fully immersed in the conversation. 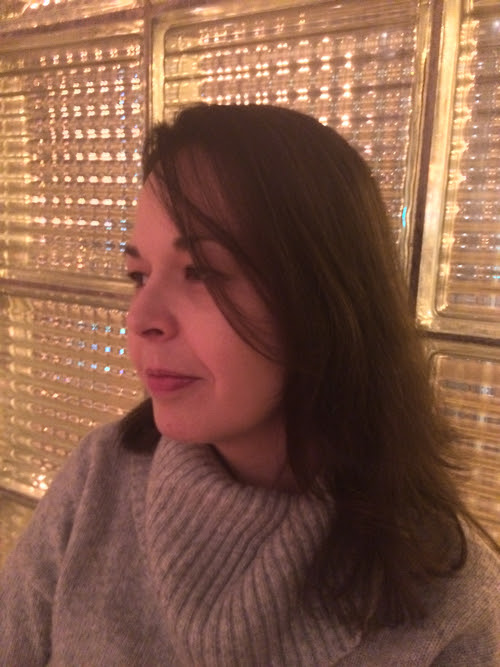 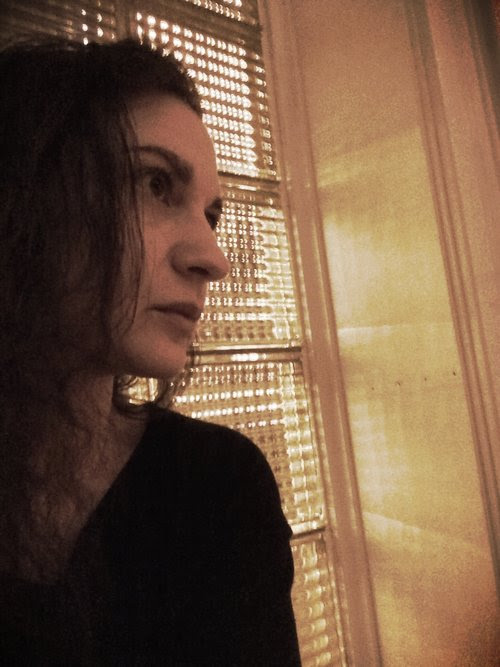 Berlin is also the project director for The Knox Writers’ House digital archives of contemporary literature, & runs a small literary studio, The Space, in downtown Galesburg.

Her collaborations with Beth Marzoni have been published in many journals. Their collection of poems, No Shape Bends the River So Long, was awarded the 2013 New Measure Poetry Prize and was published by Free Verse Editions/Parlor Press in January 2015.


Beth Marzoni
Beth Marzoni is a poet, a teacher, an admirer of bridges, & a pie-enthusiast who lives as close as she can to the confluence of the Black, the La Crosse, & the Mississippi rivers. A graduate of Knox College, she earned her Ph.D. from Western Michigan University, & is currently an Assistant Professor of English at Viterbo University. There she teaches workshops in poetry, fiction, & creative nonfiction as well as courses in 20th & 21st century British literature, modern & contemporary poetry, environmental literature, & composition.

Marzoni plays well with others. Her collaborations with Monica Berlin have been published in Better: Culture & Lit, Boston Review, Colorado Review, Denver Quarterly, DIAGRAM, Meridian, New Orleans Review, TYPO, & Vela among others. Their book of poems, No Shape Bends the River So Long, won the 2013 New Measure Poetry Prize & was published by Free Verse Editions at Parlor Press in 2015. With Natalie Giarratano, Marzoni co-edits Pilot Light, a journal of 21st century poetics & criticism.

BLURBS
“What to make of this grand experiment over months and miles of river by two poets, not one—Monica Berlin and Beth Marzoni—plus whatever third spirit they’ve invented together? Like music from the 8th century written by Anonymous, that haunting ubiquitous voice, these poems feel unsettlingly interchangeable, keep coming like the country’s longest river dream-documented here in a rich rush, dense with repetition and sorrow by poets who ‘think like a glacier or a stone, sand . . . years / like consistent rain.’ The Mississippi never had better companions or more devoted ones, save Mark Twain perhaps, or more to the point, his troubled, star-crossed Huck. The sense of human and nonhuman history, even prehistory stuns, keeps bothering this shared-solitary work. ‘Wake to any weather & know that / long ago there also was.’ I’ll take that as rare solace.”
—Marianne Boruch

“No Shape Bends the River So Long is a book of atmospheric turbulence and diminishing water levels, inner weather forecasts, dark and light, friendship, the stillness in waiting rooms, a river’s traffic—or what poets Monica Berlin and Beth Marzoni, a So & So in dialogue with us and each other, call ‘the rush of alongside & what is.’ In the zig-zag process of traveling the Mississippi River Valley, together they navigate with beauty and resonance the ‘hours of drought, of waiting, the new low- / watermarks of the lakes,’ the trees ‘that sound like rain & morning.’ This is ecopoetry, it is intimate conversation, it is meditation, the turning inward, the swinging back out from mind to world around the bend. I deeply respect and admire this book for its love of place; its tumbling, digressive progress; its glints of joy and thoughts too deep for tears.”
—Nancy Eimers

TBOP sidebar.  The poems in this collection were selected by Carolyn Forche, which is a good thing, AND you must watch the killer video below.  It's a very fine poetry video.