WINNER OF THE 2015 ROBERT KROETSCH AWARD FOR INNOVATIVE POETRY 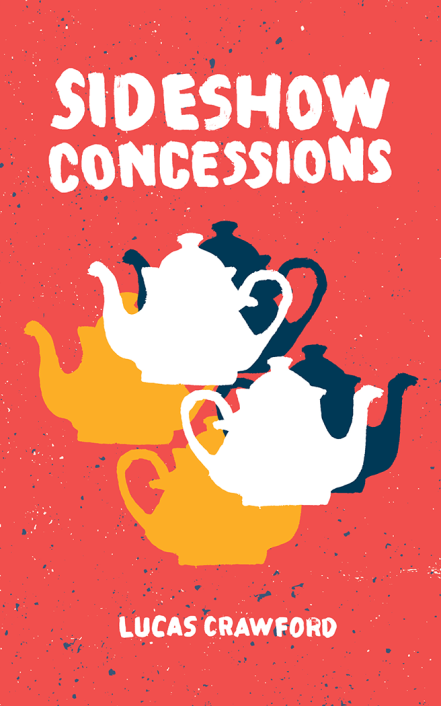 Lucas Crawford's first book of poetry, Sideshow Concessions, is a stunner.  We meet a bearded lady and the world's fattest man, both of them hungry for love and wedged into a prosaic poetic style that frequently finds itself confessional and disarming.  These disarming poems can also be as dangerous as having identity being both a weapon and a curse.

Crawford is ploughing some tough earth with this gender politic poetry but Today's book of poetry has never cared much about plumbing.  We are interested in poems smart enough to take us places we haven't been, fill our heads with wonder and if we are lucky - to fill our hearts with the same.

Scar Tissue Looks Good
On Pomquet Beach
for B.

I can only go in up to my nipples, I warn;
they're freshly lanced, still leaking.

Campfires here witness the stealth sex
of people passing through
on their way to the Cabot Trail. But it's in the plain sight
of hot daylight that we two transgender guys disrobe
to air out wounds and wind tales.
His nipples are like scar tissue;
he moved too much, too fast, post-surgery.

(Rum-clumsy is a stranger's bathroom, I once
watched my lover dot her chest with cover-up.
dabbing red pre-pimples mid-party. The world's
strangest bingo that in this moment strikes me as
charmingly Martian.)

A shallow pool holds a hot population of jellyfish,
which we sit down to meet. One is inside out but
what can we do? They've got no brains--they're like amoebas.
A baby almost shimmies up my shorts and five big ones
are pinned down dry on the shore by three rocks each.

Later I read that jellyfish never die; they death-defy
by morphing back into cystic blobs and starting over.
Before we shake out sand and drive back, I march in once
more with keen cold feet since the last dip
ought to be deepest.

We'll slip into the poetry reading late,
Scottish-sunburned, smelling
of salty pina coladas and few could guess why we're in
stitches.

I'll take off for Montreal,
meet a Westerner named Laura
who tells me she spent a day in Antigonish
and got a ticket
for parking in the priest's spot
in an otherwise empty lot.
She asks: How could you stand living in a wee town
where nothing interesting ever happens?

If you want a real slap and tickle you have to read Crawford's poem "Canadian Literature Premises" with your tongue firmly in cheek, or elsewhere.  If you are at any sort of loss for a good title or even a good premise for a poem - this one supplies ample material while gently sticking a knife in the side of Canadian Lit.

Crawford isn't much for sacred cows.

Sideshow Concessions has it share of sad humour and unnamed demons but Today's book of poetry sees Crawford's book as a daring shot across the bow, a confident declaration of arrival.

A cup of orange juice squeezed
between the retired pope's thighs.

A gallon of diet orange soda pop
because (aspartame haters be damned)
I'll burp my goodbyes.

I'll gnaw of Lloyd Robertson's kidneys, I will.
Chase them with a guava milkshake and
that assassin some would call a pink anti-depressant pill.

An enema (from) an enemy.
Another too-whipped bowl of organic cream.
Anything but another cauliflower-as-pizza-crust meme.

A Ziplock of frozen tuna tartare
to ice my burning hip.

Jamon iberico and
champagne (no fakes)

No sweat
No wake

Lucas Crawford's blunt and beautiful assessment of us all is at times haunting and almost always hopeful.  There is ample ground for frustration and anger and that plays out as well - but Today's book of poetry sees Sideshow Concessions as both a healing and a learning tool and we don't often get to say that.

When Today's book of poetry mentioned earlier that Crawford could "burn" my choice of words was both a theft and a tribute to what I love best.  If you are lucky enough to have seen the insanely good Bertrand Tavernier film Round Midnight you'll know that the main character, Dale Turner, is played by the sublime saxaphone player Dexter Gordon.  Dale Turner had his own lexicon and when he refers to someone having the craft, the voice, the tone - he says that they can "burn".

went through our back deck, but just one leg's worth.
This leg dangled in the deck's dark underbelly,
where the black cat would go in a thunderstorm,
where only the bug-brave would hide
when others were seeking.
The rest of her was left on deck,
applying the pressure of her pounds
to a ring around her thigh.
Later it was bruised first-degree purple,
shame-shade of a varicose vein gone feral.
The toes that led the leg's way through the wood
did not reach the ground. They sought earth,
craved gravity to help bear the load. My mother,
like an adrenalized logger
who deadlifts a timbered trunk from a toe,
tore the siding off the deck, crawled under, and built a
tower of stones
under my aunt's foot, bringing her down to earth
by raising the earth up to meet her.

My fattest aunt is at odds with her world.

She taught me lessons:
How to love imported salami bought on credit.
How to deal with adults throwing tantrums.
That fat falls but floats.

One day, she'll push herself
up through the soil
as a cat's cradle of roots.
No, it won't be soon,
and I can't tell you how I know.

Sideshow Concessions was the 2015 Robert Kroetsch Award for Innovative Poetry winner.  My startlingly brilliant young niece Hillary once told me that her favourite poet was Karen Solie and wouldn't you know it, she was the judge for the 2015 contest.  Here is what she had to say about Lucas Crawford's poetry:

"Sideshow Concessions is fresh, honest, heartbreaking, and funny, with turns of phrase
equally intelligent and moving."

Today's book of poetry couldn't have said it better. ABOUT THE AUTHOR
Lucas Crawford is the Ruth Wynn Woodward Endowment Lecturer at Simon Fraser University, where he teaches in the Department of Gender, Sexuality, and Women’s Studies. His poetry has appeared in Room, Rampike, PRISM International,The Antigonish Review, SubTerrain online, Other Voices, and The Nashwaak Review, as well as the anthology Between: New Gay Poetry. Crawford’s poems won the the Writers’ Federation of Nova Scotia’s Atlantic Writing Competition and are currently nominated for the Pushcart Prize. He’s based in Vancouver.