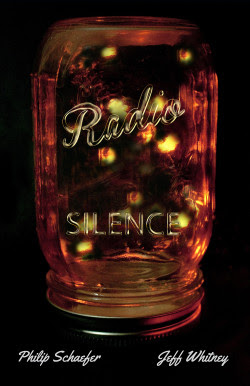 Startling good poetry.  Somehow Philip Schaefer and Jeff Whitney have morphed themselves into a single entity with one marvelous fearsome voice.  Radio Silence crackles with intelligent energy all the way through.

Schaefer and Whitney do not reveal their seamless technique and it is impossible to decipher where one voice stops and another starts.  These guys didn't edit Radio Silence, they invisibly mended it.

There is the giving and the taking and the taking
back. There is the day and the day is a woman
who loves you. There's a boy with a thumb
no bigger than the moon. There are rabid dogs
in packs of three, a moment to call it poverty, a dead
dust bowl idea of wealth, a dead child in a posthole,
delicious intent turned sour, a country going west.
There are buffalo who stagger boulder-like
in the dark. A coyote who has not eaten, a small
steady biting at her center. There is the bell
in a town no one rings, a statue's weeping,
and there is the weeping of those who visit her,
arms extended, supplicant as grass. There is
the marching of soldiers into villages
and the shrieking of ballistics in the night.
The dullness of blood and a trunk of dolls
lodged in the branches of a tree. There is the robe
his mother wore, pink with one yellow flower,
ribboning like the flag of a ruined country.
There is the sighing of holy men who do not pray
for the end of suffering but for the end of our willingness
to accept it. The ungulate that offers its neck to the river.
Candle flames ghosting around in the ungentle air.
That painting of the boy rowing out to an anchored galleon.
There is his happiness in going and his dread
and both are small spiders that live in the catacombs
of his nights. There are the people who could not resist
the sweetness of falling, the bridge with Plexiglas
and the bridges without. There is a woman
staring in the distance at a carnival, a mother
with dull insidious fruits clumped in a sack
near her heart. There are the sad notes of the mandolin,
the old hurts we remember wrong, all trembling, all curling
like smoke. Made from flaring ghosts. Whistled thin.

The poems in Radio Silence are all highly polished and full of sharp edges.  You will want to pick them up and turn them around in your hands but inevitably you will get nicked.  There's no getting away from Schaefer and Whitney without some blood letting.

That's not a line of poetry!  That's a novel, and a damned good one.  These guys have salted every poem in Radio Silence with charms like this.

The first out is the heart, small
gourd pulled from a wet pocket
of the body promised heaven
whose soul would come back
in a swell of insects or dry season
rain, who would become
for a night the moon's dull glow.

Then the doctor, half-clothed,
holds up the dark glob shining
to bring on the ten thousand
stars like the blinking eyes of gods.

This is the madness we dance for
hoping life fire to learn
the world the way a sloth learns
a tree's particular curve,
to come apart piece by
bloodied piece knowing nothing
goes back, to call home
the difficult weather, the severed
soul, the ball-to-glove thud
of figs in summer falling
each morning to mulch.

Milo, our head tech, and Kathryn, our new Jr. Editor, led our morning read.  Now they are huddled up in the corner of the office trying to decipher where Schaefer ends and Whitney starts, vice versa and so on.  Like trying to find the zipper on an apple -- it's not there.

Today's book of poetry never tires of poetry as smart as this, Radio Silence is full of urgent poems that are in no hurry.  These poems are as carefully laid out as the mosaic tiles that tell the sad history of the story of the world.  Some books take more out of you than they give, this isn't one of them.  Radio Silence starts rewarding the reader on the first page and leaves us wanting more on the last.

Not sure how to tell you that these poems are of a particular order.  Today's book of poetry wants to belong to that club.

Call it a snake curling between the chords
of a piano in your ribs, a snail that shimmies
across the sharp part of a blade.
Call it simple. Call it a woman
you've never met.

A house is always old
and there are many species of dark.

Call it a house or many species of dark,
a desperate watermelon salesman
burning his last field while miles away
children play the game of the lost dead
astronaut. they wander into the orchard
and retrieve the farthest fruit
then practice the difficult art
of coming home.

Call it gun metal rusting in the fences
like the wind's diamond tooth
while we have nothing to do but look,
let the hours stake out our bones, admire
what has learned to last.

Last night wild dogs made fireworks
of the farmhouse chickens. A screaming
mural impressed against the picket fence.
We sleep through everything until we don't.
Today the sun is an artist gluing mountains
in crimson blues, splitting faces
of the corner drunks, pulling orange trees
from the pockets of the dead.

There are words we can never say.
We have our tongues until
they're gone. Somewhere far
a gunshot, a crow,
a field of lightning writhing
to tell us we are wrong.

Philip Schaefer and Jeff Whitney must resemble the Matt Damon and Greg Kinnear characters in the Farrelly Brothers' movie "Stuck On You," conjoined twins stuck together at the hip.  I bet right now they are flipping immaculate burgers at some back road diner and writing magnificent poems on their breaks.

ABOUT THE AUTHORS
PHILIP SCHAEFER is the author of three chapbooks. [Hideous] Miraculous is available from BOAAT Press, whileRadio Silence (forthcoming 2016 from Black Lawrence Press) and Smokes Tones (available from Phantom Books) were co-written with poet Jeff Whitney. Individual work is out or due out in Thrush, Vinyl, The Cincinnati Review, Forklift Ohio, DIAGRAM, Sonora Review, H_NGM_N, Guernica and Hayden’s Ferryamong others. He tends bar at a craft distillery in Missoula, where he received his MFA from the University of Montana.

JEFF WHITNEY is the author of The Tree With Lights In It (Thrush Press, 2015) as well as two other chapbooks. His poems have appeared in journals such as Beloit, Blackbird, Cream City Review, Narrative, Poetry Northwest, Salt Hill, and Verse Daily. He lives in Portland, where he teaches English.

In these collaborative emergency poems, Philip Schaefer and Jeff Whitney remind us that silence doesn’t need to be disconcerting, even “in the chop of a storm/only the future saw coming.” But Radio Silence doesn’t fill in the gaps in transmission. Instead it attends to what emerges from those gaps when one really listens: Silence becomes noise; noise becomes music; music becomes a message—an old friend saying the perfect next thing. “There is the giving and the taking and the taking/back,” but what’s more there is what’s left over in the wake of disappearance, the afterglow of vanishment, the haunted present moment. These poems crackle with the notion that we are never alone, if we can only allow ourselves to pay attention (and participate!) with imagination and faith, in awe of the darkness and light that surrounds us.
—Matt Hart, author of Debacle Debacle and Sermons and Lectures Both Blank and Relentless