Today's book of poetry figures Katherine Leyton must have been getting more than a tan at Al Purdy's old Ameliasburgh home.  These poems are rockets.  As the first resident of the Writer-in-Residence program at the Al & Eurithe Purdy A-Frame, in the summer of 2014, Leyton must have been swatting mosquitoes and quiet summer illusions with equal fervor.

Old Al would have been thrilled to death to know that someone was putting his digs to good use.  I met him once or twice and am certain he would have heartily endorsed these poems.

Here. This is it:
you're a waitress.
You bring people French toast

and bacon. You can't pay the Hydro bill.
I used to think of you as somebody

grand, like one of those pianos Edward
fucked Vivian on in Pretty Woman.

Maybe your greatest talent
is gleaming in empty foyers.

Leyton seems to be sussing out the transitory nature of power and where it is rooted.  She tackles the big three:  LOVE  SEX  DEATH.

Al Purdy would approve, let us remember his own Sex & Death (McClelland and Stewart Limited, 1973).  Al knew then that there is nothing new under the sun and Leyton knows it now but it is the dance that sustains us and Katherine Leyton knows how to kick up the heels.

When I lived there I roamed shopping malls
on lunch break. They advertised Katy Perry

was coming. I sat in Starbucks obsessing.
The university kids couldn't tell

but the men on their computers could.
I puppeted my arms for them, my mouth.

One followed me home through a snowstorm.
A snowstorm won't stop me!

declaration, an icicle glinting in the infrequent sun,
on one of those days I felt we were living

in a farmhouse,
dinner fresh from the oven,

snow a violence spun for us,
like fate was a thing we would die doing.

Kathryn, our new Jr. Editor, said that she had a new heroine when she walked into this morning's reading.  That sent Milo, our senior tech, in a curious spin, had him sitting in the corner for the rest of the morning pouring over All The Gold Hurts My Mouth as though it were the Rosetta Stone.

The reading itself was great, Kathryn took the reins and held the floor.  There were no objections.

There is a small army of excellent young Canadian poets publishing at present, Katherine Leyton steps up onto the same inspiring mantel as those like Eva H.D., Kayla Czaga and Suzannah Showler. These ladies are tearing it up.

Today's book of poetry does not fear for the future of Canadian poetry.

I see this lady going door-to-door
with an armful of pamphlets.
I'd like to be that sure of anything.

At a funeral
my mother took me aside,
"I believe when I die I'm going up there."
She pointed to the stucco ceiling of the funeral home,
her other hand clutching a dry brownie
wrapped in a white doily.

"And all the people I love..."
she said it pleading-like, self-mocking,
too intelligent for God, like the rest of us.
As if I wouldn't want her to have that.

I want her to have that.
I sat next to a bouquet
on the car ride home,
its sick-sweet smell
like the thinning perms

that bobbed in the sparse pews.
I didn't know what to do
when they bowed their heads.
I kept my eyes on the bald minister,
who looked like 80's Florida,
and while everyone around me broke
down, I was on a plane to Miami.

Today's book of poetry won't be the only reader waiting on Katherine Leyton's second book. 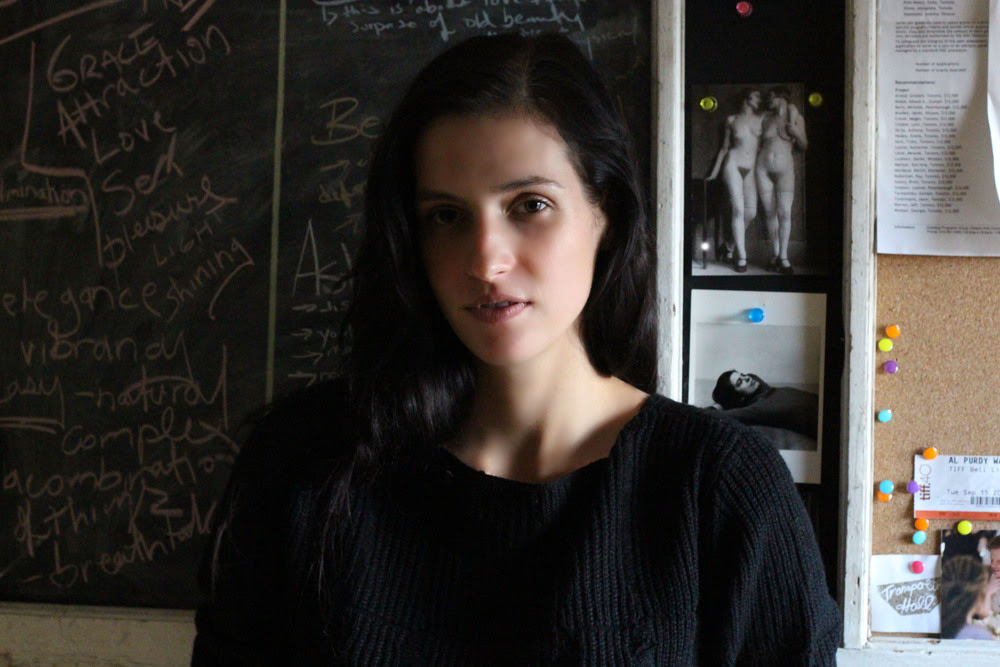 Katherine Leyton was the inaugural Writer-in-Residence at the Al & Eurithe Purdy A-Frame in the summer of 2014. Her poetry and non-fiction have appeared in numerous publications, including the Malahat Review, Hazlitt,the Globe and Mail, and the Edinburgh Review. She is also the founder of the highly unorthodox video poetry blog, HowPedestrian.ca. A native of Toronto, Leyton has lived in Rome, Montreal, Edinburgh, and Forlì.

BLURBS
"In this fierce debut, Leyton explores women as palaces and grand pianos, gleaming objects admired and shattered. Through her lyrically exuberent voice, whirring with musicality and subversive jabs, art becomes a looking glass. Just as 'women hum to drown their hunger,' these poems bring the salve of self-creation to their reader."
- Cassidy McFadzean, author of Hacker Packer

"Leyton's voice is both enigmatic and unabashed, delving into the mysteries of selfhood while offering a vivid meditation on what it means to be a woman alive today. A fearless, urgent, and beautifully wrought debut."
- Kerry-Lee Powell, author of Inheritance

We here at TBOP are technically deficient and rely on our bashful Milo to fix everything.  We received notice from Google that we were using "cookies"
and that for our readers in Europe there had to be notification of the use of those "cookies.  Please be aware that TBOP may employ the use of some "cookies" (whatever they are) and you should take that into consideration.
Posted by Today's book of poetry at 8:28 AM