Ceremony of Touching picks up the torch with aplomb.  Shklanka writes with such open emotion and accessibility that she reveals the inner workings of things.  Even things we don't want to know.

In one part of this world Shklanka is a physician, in another a dancer, she is a lover and a historian, and she is constantly reporting from her post as a poet.  It must get terribly crowded in Karen Shklanka's noggin' but then aren't we all fractured pieces trying to be whole?  Shklanka is a quick study in the fabrication of the glue that holds those pieces together.

At random times, when I am
wiping the dog's muddy paws, opening a biography
of Lord Byron, or undressing
for my husband, their faces
come to me.

Evelyn, who baked two
apricot loaves at a time -
one for me - even after I
diagnosed her diabetes.

Albert, who brought me camellias
every spring, his wife's favourites.
His blue eyes filled and he blinked
each time he passed the pink flowers
to me, their stems wrapped in wet
paper towels and foil, the way
Edith used to.

Eleanor, unpacked from the ambulance,
rattled out on a stretcher. I'd just arrived
to do morning rounds. I recognized her,
even swaddled in white blankets, strapped
down, her smile twisted, eyes wide.
In the office, her loud voice made me smile.
Down with a stroke,
the ambulance attendant told me.
A dangerous new blood thinner
available, but only in the city.
No family to decide. Time
is brain. A four-hour window of chance
to give the medication. Too late
and the stroked-out tissue
softens and bleeds. There's time, I said,
called neurologist, the helicopter,
didn't tell them right off
she was a smoker, refused to take
Coumadin for her TIA's. To get your way,
sometimes it helps to smile as you talk.
As they wheeled her out of the hospital for transfer,
I took her hand, said, I'll see you
when you get back; it will be alright.

Years ago, when a patient died,
I went down to the river at night,
my husky howling into the wind
with me. Now, sometimes I cry,
sometimes I don't.

Nobody told me I would
remember the face of
each of my patients who died.
I wish I could remember every face
in detail, every voice, and listen
to their words. So
that I could read each name,
bring them to me. Hold them
for a moment.

Who among us hasn't wished to hold someone long past holding?  Ceremony of Touching explores many of the ways we come together to interact, love and hurt one another, all those juicy moments that make us human.

One section of Ceremony of Touching is a series of poems called Flight Log.  These poems create a fictional logbook for the flight of the Enola Gay on that fated day over Hiroshima.  These short poems are sparse, almost code, and almost perfect.  Shklanka has just the right balance of function and gravitas.  These little bullets are impressive.

Shklanka's curiosity does not let us down, these poems have laser guided vigor, whimsy when called for.

Trying Not To Remember the Woman in the ER

White needles, hoarfrost on the Douglas fir.
I can't leave my boyfriend, she says. Women use

what their partners do. I still want
to be a social drinker, she says.

All the new science is about immortality.
When's the point of no return,

journeying from bottoms up? It's snowing
at the bottom of the mountain,

not the top. When you're walking downward
inside a cloud, at what exact moment

does the snow start to form?
We say that hearts beat, but they don't.

This mornings read of Today's book of poetry went surgically smooth, everyone got out with only the smallest of scars and those were all neatly stitched.

Shklanda isn't afraid of shining the light on her own imperfections, these poems have the weight of truth about them.  Every dilemma does not have an immediate solution, or a solution at all, but these are the moments we have to live through, Ceremony of Touching gives voice to keen observations of our stumble.

A raven drops a chestnut into the middle of the afternoon,
flies back to the lamp-post, waits for the lights to change.
I am down to the last two patients of the day.

A woman with lung cancer whose father recently died
of the same. She inherited the smoking,
or the radon in the basement.
She asks me to tell her
whether she needs more chemotherapy.

The wife of a man with Alzheimer's. He needs diapers,
runs away and is returned home by police
once a week. She should let him go
into extended care. At least I will try
to convince her of that.

Cars will crunch the raven's chestnut into a smear.
The raven will eat when the light changes. 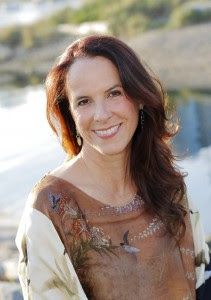 ABOUT THE AUTHOR
Karen Shklanka is a poet, family physician and an Argentine Tango dancer. Her first book of poetry, Sumac’s Red Arms, published by Coteau Books in 2009, was nominated for aForeWord Review’s Book of the Year award. In 2012 she was long-listed for the CBC Poetry Prize (for “Flight Log” – included in this collection). Her poetry has been included in the Planet Earth Poetry Anthology and the 2004 chapbook anthology, Letters We Never Sent, edited by Patrick Lane. She was four times a finalist in ARC magazine’s international poem contest, and has been published in numerous other literary periodicals, most recently in CV2 and Room.

Born in Toronto, Karen Shklanka spent 14 years practicing rural and emergency medicine in small and medium-sized Canadian communities. She has an MFA in creative writing from UBC and currently works as a hospital-based Addiction and Pain medicine consultant in Vancouver, and as a Clinical Assistant Professor at UBC.