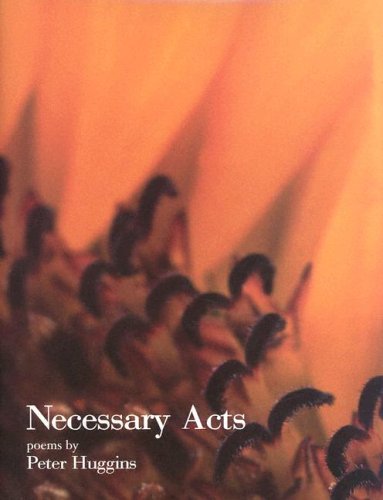 If you follow Today's book of poetry you'll remember Peter Huggins, back in May of this year we took a look at Huggins excellent second book of poetry Blue Angels (River City Publishing, 2001). You can see that here:

We've made a promise to our publishers that we will happily read all of the books of poetry they send our way regardless of when they were published.  Although we do try to post blogs about recently published books first we believe all books of poetry are new until the reader opens them.

So today we're going to take a shot at Huggins third book of poems, 2004's Necessary Acts. Necessary Acts seemed a necessary inclusion.  Huggins is one polished poet, we've become very fond of the way he works through a poem.  These poems feel as fresh as new snow, clean too.  Huggins writes with focused breadth.  His poems free range from the deaths of little white rabbits to the unfortunate chain saw skills of grandfather and the readers feels that given time Huggins would artfully encompass the universe and render it in terms we could understand.

My grandfather thought flesh was like air,
Nothing sharp could hurt it. Or maybe
He was just careless, he dropped his tools--
Hammer or saw, level or plane--

Wherever he was and spent half his time
Looking for them under boards, in cabinets,
By sawhorses or on stairs. The right tool,
Never at hand, was always out of reach.

His chain saw, though, he found without trouble.
Eager for wood, it gobbled up limb,
Branch and trunk. Nothing slowed its drive
As it chewed the ring and middle fingers

Of his left hand, dusted the half-cut
Hickory with his blood, gave his flesh and bone
To the blue air, and left a space in hand
And hickory he never touched or cut again.

Today's book of poetry is convinced that Peter Huggins is building a poetry mansion and each of the poems from Blue Angels and Necessary Acts are a solid, beautiful and necessary stone, one after the other like a master mason.  It's like Huggins is preparing meals for a poetry feast.  If one succulent treat doesn't do the trick, turn the page,  Necessary Acts will rumble out another Cordon Bleu plate.

Necessary Acts was one of those books that Today's book of poetry wanted to slow down, read more slowly to get all that gravy.

The Man Who Thought He Was Dead

My friend Rick and I
Were fishing in my boat
On Logan Martin Lake
When it started to rain.

We went ashore and got under
A sweet gum. I thought the lightning,
When it hit the sweet gum,
Cut Rick's face off.

I heard Rick's voice.
His hands and then someone else's
Worked my chest like a pump.
I guess I was dead.

I didn't mind.
I was having a good time,
Floating around the ambulance,
Watching the paramedics

Try to shock me into life.
I felt good. I
Didn't want them to help me.
I wanted them to leave me dead.

Then I saw my body jump.
Sucked
Into myself, I
Woke up in the hospital

With a terrible headache.
Rick said it's strange
The same thing that killed me
Brought me back to life.

I told Rick
I'm damned if I know
What to make of being dead,
Or what to do with my life.

Today's morning read was a serious affair.  All of our readers were on the same reverent page, they'd all read Blue Angels so they had a good idea of what was coming.  Huggins aren't necessarily solemn but they sure do carry some weight.

Necessary Acts is Huggins third book of poetry, his fifth and most recent books of poems is Audubon's Engraver (Solomon & George Publishers, 2015) and Today's book of poetry feels confident they are Huggins gold, he doesn't seem to mine anything else.

Not with poison or guns or traps.
A wrench, something to grip and swing,
To heft like an axe and bring down
With one sharp blow. In a white coat
I held the rabbits over the sink
While they yellowed their fur. Bob hit
The rabbits on the backs of their heads,
Then cut their throats, drained their blood,
Opened their chests and clipped
Their aortas with stainless steel scissors.

I wrapped the bodies in brown paper,
Put them in the freezer,
Cleaned the wooden dissecting board,
Watched the white aortas bubbling
In the medium I'd prepared earlier
That morning. All day I hoped
Our results tallied with yesterday's
And the days' before. Repeatable, confirmed.

Some days we used guinea pigs.
Bob kept them in his coat pocket
Until he was ready for them. They cried out
When he grabbed their hind legs
And flicked their bodies against the sink.
I wrapped the guineas in white paper
And stacked them in the freezer
Beside the rabbits. On Fridays
The guineas and rabbits were incinerated,
And I got paid. That job prepared me
For life and for work and I'm grateful.

Peter Huggins has quickly become a crowd/fan favourite here in our office.  Now if we can only get our hands on his other books...

ABOUT THE AUTHOR
Peter Huggins is the author of five books of poems, Audubon's Engraver (Solomon & George Publishers, 2015), South (Solomon & George Publishers, 2013), Necessary Acts, Blue Angels, (both from River City Publishing, 2004 and 2001), and Hard Facts (Livingston Press, 1998). Audubon's Engraver was shortlisted in 2016 for the International Rubery Book Award, and South was shortlisted for that same award in 2014. He has published over 300 poems in many journals and magazines, and was awarded a literature fellowship in poetry from the Alabama State Council on the Arts in 2006.
In the Company of Owls, a middle grade novel, appeared from NewSouth/Junebug Books in 2008. In addition, he has published a picture book, Trosclair and the Alligator (Star Bright Books, 2006), which has appeared on the PBS show Between the Lions, received a Mom's Choice Award, and been selected as a best book by the Bank Street College of Education and by the CCBC at the University of Wisconsin-Madison. He has recently retired from teaching in the English Department at Auburn University where he served for thirty-one years, and he and his wife live in Auburn, Alabama.

BLURBS
"Necessary Acts is ripe with characters, from Dante to Sherlock Holmes to Elvis -- and ripe with poetical occasions, from a persona poem that converys the indignation of the animals Noah left behind to a narrative poem that recalls killing white rabbits at Tulane Medical School. Peter Huggins is unstoppable."
- Beth Ann Fennelly, author of Tender Hooks

"Peter Huggins is a rarity - a poet who writes with the clarity of a silver bell."
- Thomas Rabbitt, author of Prepositional Heaven

We here at TBOP are technically deficient and rely on our bashful Milo to fix everything.  We received notice from Google that we were using "cookies"
and that for our readers in Europe there had to be notification of the use of those "cookies.  Please be aware that TBOP may employ the use of some "cookies" (whatever they are) and you should take that into consideration.
Posted by Today's book of poetry at 8:11 AM