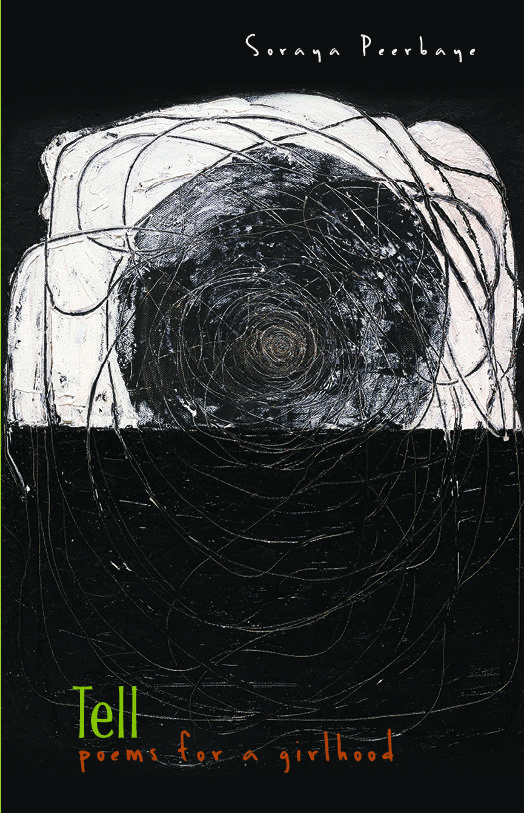 Young men do terrible things all the time, we see it on the television news every night, we are frequently shocked by new levels of horror but ultimately we've given up the pretense of being surprised.  We know evil lurks in anticipation.

But when young women do terrible things it genuinely upsets whatever karmic balance we delicately hold on to.  It troubles our inner ear, makes us stumble, slur.

Soraya Peerbaye's Tell - poems for a girlhood reenvisions the horrible death of Reena Virk.  Virk, a young teenage girl was murdered by a gang of peers, mostly other girls, in November of 1997 in Saanich, British Columbia.

Mistrials,
overturned verdicts.
Transcripts of earlier testimony
placed before the witness,
past and present overlaid
like vellum, the defence
cross-examining each
falsehood, each fault or failure
of memory, I was tricked, said one.

On the stand they were always
thirteen, fourteen, fifteen.
The boy who was Warren's friend,
diagnosed with post-traumatic stress
disorder; the girl who testified
to seeing Kelly and Warren
cross the bridge together,
dead at seventeen, heart failure.
Then she was only a recording,
a click, a lick of ribbon,
a hiss of white noise.

Voir-dire. See, say,
to see them say, say
what is true. Warren said
he and Kelly made a pact,
that he'd say he beat up a Native
for calling her a hootchie.
The year he recanted he traced
Metis lines in his cheekbones,
asked to be transferred
to Kwikwexwelhp Healing Village.

I remind you, witness,
that you are still under oath.
Offered a glass of water
when they wept. They drank
without thirst, without lowering their eyes.

Kelly shouted in the courtroom
at the prosecutor:
- You can say anything you want
but everything that comes out of your mouth
is going to be wrong.

- What did you say? asked the Crown.

- What is coming out of your mouth -

what you are saying -
everything that comes out of
your mouth -

Heather Spears tackledanced through this territory in 2000, immediately after the first trial, with Required Reading/A witness in words and drawings to the Reena Virk Trials 1998-2000 (Wolsak and Wynn, 2000).  Spears' book is a serious lament and compelling read.  Soraya Peerbaye is from the same school of unadorned and emotionally controlled narrative and it makes for a riveting engagement.

Peerbaye knows a metronome of reason and persistent inquiry will bring us closer to the truth than hysterical anger and rage.

A bridge is wood trestle below, metal
above; a guardrail

A bridge is a distance, measured in steps, in pools
of lamplight, the time it takes to cross.

In breaths. - How far did you watch her go?
- Halfway across, to where the light spreads out.

Headlights of passing cars, bright beads on a wire
that curves into darkness: Highway 1A, Gorge Road.

- Did you observe her gait as she crossed?
I thought of the gaits of Indian dance,

the little I learned, carrying
my clumsiness far into adulthood:

to someone who wants you, to somewhere
safe.

The truth of a thing is never known the same way by two different people.  Several trials and the best efforts of justice have never seen one answer, one solution, one truth.  Sometimes poetry can help fill that gap and Peerbaye's intense gaze aims to do just that.

Tell - poems for a girlhood carries a quiet sense of dread, the weight of a murdered young woman and the murky dance of fractured memory.

We knew going in that Tell - poems for a girlhood was not going to have a happy ending but Peerbaye and her intelligent diligence kept us turning pages for a story we already knew.  Books of poetry don't get much sadder that this one.

Was time important to you that night?
Yes, they said.

Did you abide by a curfew? Ten o'clock,
eleven, midnight.

Who greeted you? No mothers; girls signed their names
in the register, and women who were not their mothers
initialed the time.

How long did it last? A moment.

How long is a moment?

How long does it take to walk across the bridge?

How long does it take to walk home?

I'm fucked. I'm fucked for the rest of my life. Warren,
overheard crying to his father, the night of his arrest.
The tidal chart entered as an exhibit, indicating the time lapse
between high waters and low waters.

I don't remember. It was so long ago, Kelly repeated,
a monotone. Her second trial. At her third, she fell silent.

How old the Gorge, how old the middens. All carbon-14 dates
have probability errors, as atmospheric testing of nuclear weapons
changed radiocarbon amounts in the natural world.

How long the trials. Twelve years.

How long did you look back?
I remember

being fifteen, lying on my best friend's bed, listening
to Forever Young by Alphaville.  How badly I wanted a boy
to slow dance that song with.

Soraya Peerbaye's Tell- poems for a girlhood won the 2016 Trillium Poetry Award and is nominated for the 2016 Griffin Poetry Prize.  That's some pretty high cotton.

The staff here at Today's book of poetry had a rather sombre reading this morning.  Reverent and quiet.  Not all pleasures are joys. 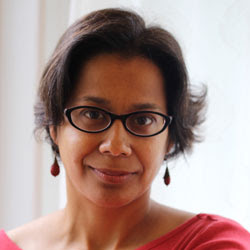 ABOUT THE AUTHOR
Soraya Peerbaye’s first collection of poetry, Poems for the Advisory Committee on Antarctic Names, was nominated for the Gerald Lampert Award. Her poems have appeared in Red Silk: An Anthology of South Asian Women Poets (2004), edited by Priscila Uppal and Rishma Dunlop, as well as the literary journals Other Voices, Prairie Fire and The New Quarterly; she has also contributed to the chapbook anthology Translating Horses. She holds an MFA in Creative Writing from the University of Guelph. Peerbaye lives in Toronto with her husband and daughter.

BLURB
Peerbaye's new work tells a haunting story of girlhood, one we wish could be untold or exchanged for one that powerfully honours the colour of our skin. Still, these poems placate our loss with their clear-eyed intelligence and depth.
- Natasha Bakht

We here at TBOP are technically deficient and rely on our bashful Milo to fix everything.  We received notice from Google that we were using "cookies"
and that for our readers in Europe there had to be notification of the use of those "cookies.  Please be aware that TBOP may employ the use of some "cookies" (whatever they are) and you should take that into consideration.
Posted by Today's book of poetry at 7:55 AM