The Man Under My Skin - Juliana Gray (River City Publishing) 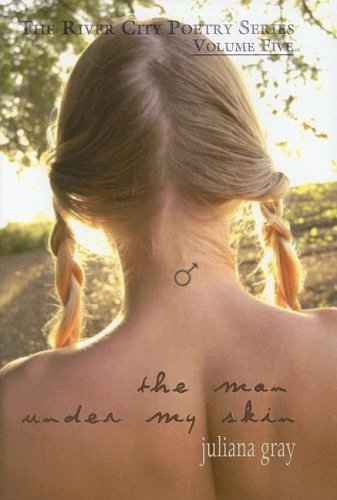 Today's book of poetry has never met Juliana Gray and knows next to nothing about her but we would bet serious money that Juliana Gray adores Carson McCullers almost as much as we do.  It could be entirely fanciful thinking on our dimwitted behalf but The Man Under My Skin could easily be a book the grown up Mick Kelly might have written after she walked out of McCullers' The Heart Is A Lonely Hunter.

These poems are the keenest sort of observational poems you can get, they look right through to cold hard truth. Juliana Gray navigates a romance in the Mississippian wilderness, sad poverty, the internal dialogue of a child-killer, and so on, always with an air of knowing grace/gravitas.

Hard to think of it as organ, mass
of tissue like the liver, lungs or heart,
a bodily machine performing tasks
designed to keep the world and flesh apart.
Its beauty is an accident, its gloss
and dimpled softness, pallor and heated rose--
this silken radiance comes at the loss
of spikes or armored scales. We're all exposed.
Yet like those other human engines, the skin
betrays itself with ailments, tailor-made
diseases, blights that turn the porcelain
complexion to a withered masquerade.
And like the heart, it suffers from too much
of what it lives on, dying to be touched.

Today's book of poetry felt at home with the poems in The Man Under My Skin, these are poems with characters that are familiars, some of them have their eye on the ball, some are doomed to worse fates.  Gray has a darkish sense of humour.  Today's book of poetry is convinced all good writers from the American South have a big old Gothic Devil/Angel dyad firmly on their shoulder.

Gray can be playful but she's the cat and you're the mouse.  These poems are intense and fully formed but they are never predictable.

To a Five-Cent Package of Writing Paper

All the children in my father's class
drew names, and all the kids but one -- the boy
who had drawn my father -- brought their gifts to the tree.
The teacher, realizing they were short,
rifled her desk for something a boy might like.
All she found was you. He fingered the band
that held you, the Christmas gift, together. Then
my third-grade father saw that he was poor.

My sister, and I were overcome with gifts
we could not name and which he loved to explain --
puzzles, boomerangs, a bamboo flute.
He told me his Christmas story one of those nights
when he felt he could trust me, a glass of scotch in his hand.
His gift to me: an inherited sense of shame,
history, the futility of wealth.

It was Grand Central Station in our offices this morning and it is continuing into the afternoon.  As a result our morning read was a somewhat condensed affair but that didn't stop Kathryn, our Jr. Editor, from knocking several of Juliana Gray's fine poems out of the proverbial park.

The Man Under My Skin reads like the kind of confession a slight fever can elicit, passionate and warm to the touch.

Don't think of it as misprint, a menu slip
of a Chinese tongue. In fact, don't think at all.
The silken waitress watches, reads our lips
sounding out desire in whispered drawls.
She calls to the kitchen for number sixty-nine
and chooses serving bowls of scarlet lacquer,
enamel chopsticks, spoons, two cups of wine,
a dish of chiles bright as firecrackers.
The wait's an agony of subtle touch,
a glance, a brush, the work of seeming chaste.
We bite our lips, holding back so much
desire, aching, dying for a taste.
At last we drink our bowls of piping broth,
unzip and grope beneath the tablecloth.

The Man Under My Skin was published in 2005.  More recently Juliana Gray has published a second book of poetry, Roleplay (Dream Horse Press, 2012), which won the 2010 Orphic Prize.

Today's book of poetry will continue to blog about "older" titles as well as the most recent releases as long as publishers will send them to us.  We are still convinced that until you read a book the first time it is going to be new to you. 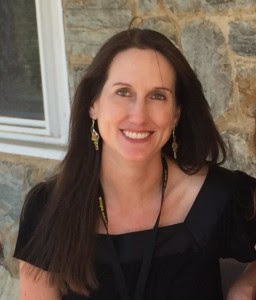 ABOUT THE AUTHOR
A native of Alabama, Juliana Gray teaches at Auburn University. During the summers, she works on the staff of the Sewanee Writers’ Conference. She is the author of the chapbook History in Bones, published in 2001 by Kent State University Press as part of its Wick Poetry Series. Her poems have been published in a variety of literary journals and anthologies, including Yalobusha Review, Sundog, Poetry East, The Formalist, The Louisville Review, Stories From the Blue Moon Café Volume III, and The Alumni Grill 2. Samples of her creative non-fiction can be found in River Teeth, and Cornbread Nation 2.

BLURBS
"The poems in The Man Under My Skin are fully imagined and keenly observant, funny and passionate, unpredictable and, in their formal poise, just right. Juliana Gray writes about fundamental issues of loving and being loved, of happiness or acceptance in the midst of loss, of community in the midst of isolation, or isolation in the midst of community. Her imagination is restless, big-hearted, mature, intense. Her wit is dry but never arid. A beautiful book in its own right, The Man Under My Skin marks the opening of a significant career."
- Alan Shapiro

"The sights, smells, tastes, and touches of the South, my South, are everywhere present in Juliana Gray's poems. But most poignant are the measured rhythms, tonal modulations, and considered words -- all familiar sounds that echo here. Reading Gray brings to mind a summer evening on a front porch, the steady creaking of a comfortable rocker, the clink of ice cubes in a glass, and a voice -- warm, witty, wicked, and wise -- speaking from neighborly dark."
- R.S. Gwynn

We here at TBOP are technically deficient and rely on our bashful Milo to fix everything.  We received notice from Google that we were using "cookies"
and that for our readers in Europe there had to be notification of the use of those "cookies.  Please be aware that TBOP may employ the use of some "cookies" (whatever they are) and you should take that into consideration.
Posted by Today's book of poetry at 10:54 AM