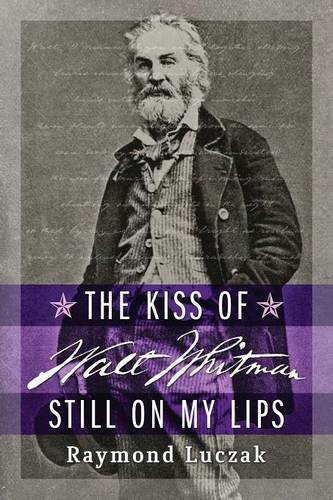 Today's book of poetry would like to welcome you all back.  Our entire staff has been away on various holidays and adventures but we are all back in our various saddles and excited to see what 2017 is going to bring.

2017 at Today's book of poetry is starting off with a firecracker of a collection that lives up to the promise of the glorious title.  The Kiss Of Walt Whitman Still On My Lips is written in the rarely used nonet form, nine lines and Bob is your uncle.  Luczak has forgone traditional rhyming schemes and instead gives us 82 love songs full of wonder all aimed in the direction of Walt Whitman, American poet/saint and author of Leaves of Grass.

Rayond Luczak is among a chorus of trailblazing LGBTQ and QDA poets who are changing our ways of seeing them and the world.  A lot has changed since old Walt laid down the law.  The timbre of these poems comes in fire engine red and firing on all cylinders.

Just like how some men like to compare their dicks,
he and I compare our beards. Though eight years older,
his beard is darker, thicker, dense. Amidst his prattle
about his favorite painters (Vermeer and Leonardo),
Corinthian columns, and Cate Blanchett in Elizabeth,
he peers closely at my beard: once a fiery red,
now a cropped ginger mellowing into ashy white.
I await the flame of question in his eyes.
My answer is ready: yes, you can fondle my beard.

The Kiss Of Walt Whitman Still On My Lips is part loving elegy, part eulogy, part love letter, part confessional, part sexual fantasy and more, but all of it tender, all of it like a warm and wanted embrace.

Raymond Luczak is an open door, these poems can't wait to welcome you into his conversation.

Leaves of Grass had initially sprouted out of the mish-
mash of pithy lines scribbled in financial ledgers.
You'd cut and pasted clippings from here and there.
You didn't know what to do with them at first;
only when you returned from a trip to New Orleans,
where you met a man whose name is lost to all but you,
did you at last see: O passion! O sweet love! O America!
The wanton filth you self-published was a pink grenade
detonating in an atomic cloud straight from the future.

This morning's read, the first of the new year, was a relaxed affair.  Milo, our head tech, has become a loquacious and dedicated reader so he led the charge.  One of Today's book of poetry's nieces has taken up residency in the Stuart Ross Poetry and Guest Room so she joined in for the mandatory reading.  If you stay under this roof you are forced to read poetry out loud, it is a law.

Please rescue me from the sterility of America.
Everything's been shrink-wrapped and digitized.
I can't touch or feel anything real. Damnpissshitfuck.
It's all up here, not down here or there.
It's all commercials and franchises.
Even death has its own antiseptic soap dispenser.
Advertisers use sex as their biological weapon.
Demographics are a communal sport of saturation.
Christ! Just scrape the ISBN bar code off of my DNA.

The Kiss Of Walt Whitman Still On My Lips is a hearty, lusty and loving romp.  Luczak steps across time for love and what could be more romantic than that.

ABOUT THE AUTHOR
RAYMOND LUCZAK (pronounced with a silent "c") is perhaps best known for his books, films, and plays.

He was raised in Ironwood, a small mining town in Michigan’s Upper Peninsula. Number seven in a family of nine children, he lost much of his hearing due to double pneumonia at the age of eight months.

In 1988, he moved to New York City. In short order, his play Snooty won first place in the New York Deaf Theater’s 1990 Samuel Edwards Deaf Playwrights Competition, and his essay "Notes of a Deaf Gay Writer" won acceptance as a cover story for Christopher Street magazine. Soon after Alyson Publications asked him to edit Eyes of Desire: A Deaf Gay & Lesbian Reader, which, after its appearance in June 1993, eventually won two Lambda Literary Award nominations (Best Lesbian and Gay Anthology, and Best Small Press Book). He hasn't stopped since!

In 2005, he relocated to Minneapolis, Minnesota, where he continues to write, edit, and publish.