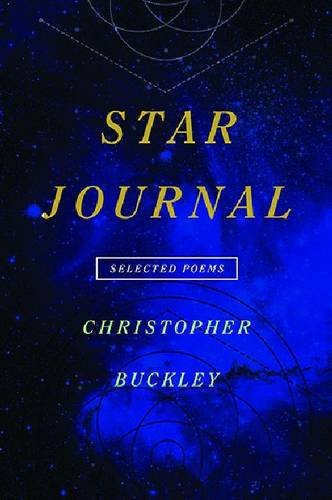 Star Journal - Selected Poems  by Christopher Buckley is as straightforward as a yardstick, measuring by star-light, the weight of a butterfly heart.  In fact Star Journal is a book of poet magic, a proverbial pot of gold.  Today's book of poetry defies you to open any page of this book and not be entertained and enlightened.

I don't hear 'em but I certainly feel the ghosts of Woody Guthrie and Will Rogers in the elusive space in the English language where intellect and emotion get to tango it out in an invisible swirl of yin and yang.  Here is a poet with a giant poet clock time machine, metronomes of logic, tiny unseen hammers of reason, all of ticking away in balance inside the Buckley noggin'.

Today's book of poetry couldn't help but think cinematic when reading these expansive certainties. There were moments of complete satisfaction, just like watching a Francis Ford Coppola movie where all the details are exact, all the details make it true.  Buckley does the same thing, makes sure you are hearing the right sound, fills the mirror in the corner with the proper reflection, colours in the edges of the image until you are there breathing it in.

Why I'm in Favor of a Nuclear Freeze

Because we were 18 and still wonderful in our bodies,
because Harry's father owned a ranch and we had
nothing better to do one Saturday, we went hunting
doves among the high oaks and almost wholly quiet air....
Traipsing the hills and deer paths for an hour,
we were ready when the first ones swooped
and we took them down in smoke much like the planes
in the war films of our regimented youth.
Some were dead
and some knocked cold, and because he knew how
and I just couldn't, Harry went to each of them and,
with thumb and forefinger, almost tenderly, squeezed
the last air out of their slight necks.
Our jackets grew
heavy with birds and for a while we sat in the shade
thinking we were someone, talking a bit of girls--
who would "go," who wouldn't, how love would probably
always be beyond our reach...We even talked of the nuns
who terrified us with God and damnation. We both recalled
that first prize in art, the one pinned to the cork board
in front of class, was a sweet blond girl's drawing
of the fires and coals, the tortured souls of Purgatory.
Harry said he feared eternity until he was 17, and,
if he ever had kids, the last place they would go would be a
parochial school.
On our way to the car, having forgotten
which way the safety was off or on, I accidentally discharged
my borrowed 12 gauge, twice actually -- one would have been Harry's
head if he were behind me, the other my foot, inches to the right.
We were almost back when something moved in the raw, dry grass,
and without thinking, and on the first twitch of two tall ears,
we together blew the ever-loving-Jesus out of a jack rabbit
until we couldn't tell fur from dust from blood....
Harry has
a family, two children as lovely as any will ever be--
he hasn't hunted in years... and that once was enough for me.
Anymore, a good day offers a moment's praise for the lizards
daring the road I run along, or it offers a dusk in which
yellow meadowlarks scrounge fields in the grey autumn light.
Harry and I are friends now almost 30 years, and the last time
we had dinner, I thought about that rabbit, not the doves
which we swore we would cook and eat, but that rabbit--
why the hell had we killed it so cold-heartedly? And I saw
that it was simply because we had the guns, because we could.

Christopher Buckley's poems are small stories that spin out so large you can't help but get caught up in the vortex, they becomes proclamations without ever proselytizing.  We can almost believe that Christopher Buckley has our planet sussed out, or at least our meagre scrabbling over its surface.

But in truth Buckley is asking as many questions as your average skeptic.

Range.  Good poets have range and Buckley covers it.  We are subject to musings on Mao Tse-Tung, a beautiful blue evening in Santorini, Bertrand Russell's musings on astronomy, reading/not reading Einstein, dancing "the Stroll," and so on.  These poems swell with the lovely interconnectivity of a man full of ideas, Buckley encompasses a big universe and he does it in big, big poems of staggering beauty and subtle intellect.  When you're reading these poems you are taking in a lot of new information but it is coming through the Buckley filter.

But the truth is what we are always
watchful, lying in wait for ourselves.
-Neruda

I remember the idiot in the town square
of Es Castell, trying each day to entice
the resident pigeons to eat the orange peels
he threw blissfully, and with hope,
on to the grass and walks.
But, after so much time,
they were on to him, and the worthless peels,
and waddled away in a mumbling cloud
of feathers....And each day he'd finally tire
of their truculence and unzip the jacket
of his purple warm-up suit, spread it wide
as a red kite's wings, and run
into their grey midst, scattering them
a few feet beyond the fountains, but never out
above the sky-colored water,
or into the water-colored sky....

Like the old men already sitting there
in the wet shadows on the benches,
we soon tolerated him--like the pigeons
who came back in a minute or two
and who seemed to forget,
as he did, such purposeless and
momentary confrontations--days
like lost clouds.
I soon realized
that I was blessed simply
to walk out each morning
around the square and hear
the clock tower above the post office
strike the hour two times,
a few minutes apart, and not care
which could be correct; blessed
to sit next to the public phones,
which occasionally rang for no one,
and watch the bees dissolve into the sun,
knowing someone else had done the math of light--
the stars never showing any sign
of distress.
Yet, if there is some truth
about us, it's not in the stars,
or in the cluster of orange peels
almost as brilliant on the mid-morning walk--
but perhaps in the fact that we can tolerate
one among us to whom they are of equal
consequence.
I no longer need to look
to stars, the poorly punctuated dark,
for no matter what I tap out on the Olivetti,
the earth still looks inescapable from here.
But if some innocence remains,
a little of it might be here
on this small island
deserted in winter by tourists,
foreign commerce, and even the attention
of the more fashionable birds.
The green finch and the swifts are
content and have their say.
The boats are in each afternoon,
gulls climbing the air after them,
praising the fruits of the sea.

And if now we are not sure
what is of value--looking out
at the fig trees thin as refugees
along the cliff--we at least understand
what is worthless before our eyes
morning after morning, as the steam
and fog of industry lift off
beyond the port and to the west
without us.
I sit above the harbor,
happily on the benches provided
by the ayuntamiento for just this purpose,
beneath the orderly palms,
freighters and cruise ships slipping
in and out, going somewhere...
and make do with the intuition of wind,
the pines with their impromptu rhythms,
my hands and feet free
to defeat the intricate purposes of air,
to do nothing more than claim
the prosperity of light.
Late afternoon,
I like the white tables fronting
the bars in the square, relaxing
with a small Estrella--a beer
named for a star--knowing that,
soon enough, around the corner,
I'll be on my way back
from the market and bakery
with a heart as full as the summer
5:00 sun, with a yellow grocery bag
in each hand as I ascend the steps
to our flat over the cove, where
I'll look out, and see in the reflection
of the glass doors, a happy man
arranging oranges in a bowl.

Buckley's Star Journal made for a great morning read in the office today.  His poems read like tidy little novels so the reader has time to sink their teeth in.

Vallejo wrote that with God we are all orphans.
I send $22 a month to a kid in Ecuador
so starvation keeps moving on its bony burro
past his door--no cars, computers,
basketball shoes--not a bottle cap
of hope for the life ahead...just enough
to keep hunger shuffling by in a low cloud
of flies. It's the least I can do,
and so I do it.
I have followed the dry length
of Mission Creek to the sea and forgotten to pray
for the creosote, the blue saliva, let alone
for pork bellies, soy bean futures.
Listen.
There are 900 thousand Avon Ladies in Brazil.
Billions are spent each year on beauty products
world-wide--28 billion on hair care, 14 on skin
conditioners, despite children digging on the dumps,
selling their kidneys, anything that is briefly theirs.
9 billion a month for war in Iraq, a chicken bone
for foreign aid.
I am the prince of small potatoes,
I deny them nothing who come to me beseeching
the crusts I have to give. I have no ground for complaint,
though deep down, where it's anyone's guess,
I covet everything that goes along with the illustrious--
creased pants as I stroll down the glittering boulevard,
a little aperitif beneath Italian pines. But who cares
what I wear, or drink? The rain? No, the rain is something
we share--it devours the beginning and the end.

The old stars tumble out of their bleak rooms like dice--
Box Cars, Snake Eyes, And-The-Horse-You-Rode-In-On...
not one metaphorical bread crumb in tow.
Not a single Saludo! from the patronizers
of the working class--Pharaoh Oil, Congress,
or The Commissioner of Baseball--all who will eventually
take the same trolley car to hell, or a slag heap
on the outskirts of Cleveland.
I have an ATM card,
AAA Plus card. I can get cash from machines, be towed
20 miles to a service station. Where do I get off penciling in
disillusionment? My bones are as worthless as the next guy's
against the stars, against the time it takes light to expend
its currency across the cosmic vault. I have what everyone has--
the over-drawn statement of the air, my blood newly rich
with oxygen before the inescapable proscenium of the dark,
my breath going out equally with any atom of weariness
or joy, each one of which is closer to God than I.

BLURBS
Posted by Today's book of poetry at 9:35 AM