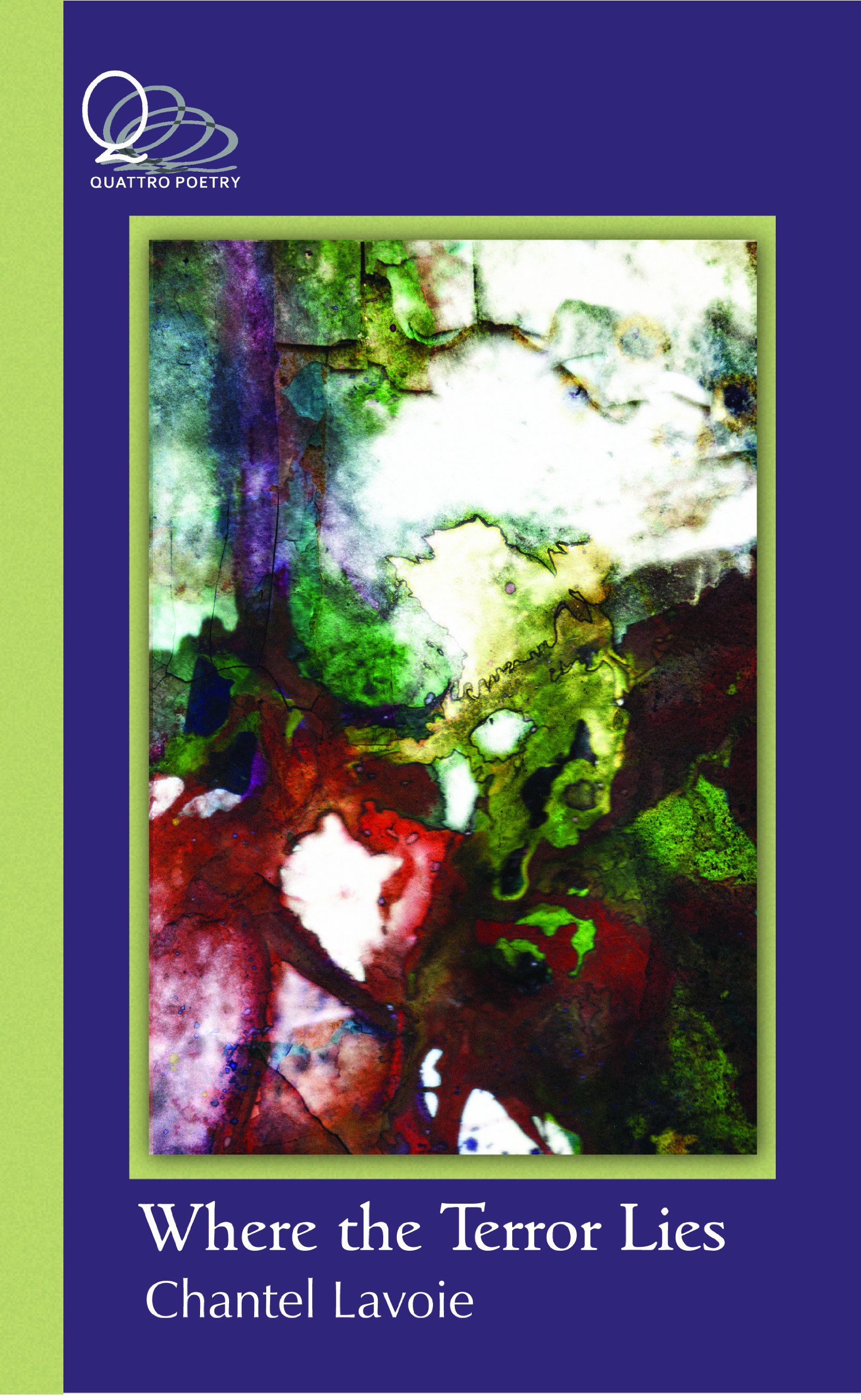 Chantel Lavoie must have some dark sources if her treatise on cannibalism, Chaucer and Dante is any indication, and it is.  Lavoie is willing to till some stony soil; she comes away with riches.

Where the Terror Lies is partially an amalgam of children's fairy tales skewered with purpose, cautionary whimsies and folk tales that we thought we knew.  Lavoie is one of those poets who is always going to poke at a sore tooth.  It is also ripe with "life is like this" poems that strive for an honesty you can believe, even if it hurts.

More than you want to take

It doesn't seem like the snow is falling so much
as the earth, trees, bush and grass are rising up,
an angled world floating into white-pieced air.

You go, taking no evidence, leaving
behind a scent I don't like to replace
traces of you, here and here.

If you wanted a harder person, you
could have found someone shiny,
not one who cherishes scratches,
skin under your short sharp nails.

And you must have known, after all this untouchable
time, how this reasoning engine huddles in the dirt,
hurt, every time she gets too proud.
The up and down of things. You see

Today's book of poetry picked up a particular vibe from Where the Terror Lies that we recognize even if we can't exactly name it.  These poems are bitter-sweet tumblers of lost love and broken promises that sound heart renderingly fresh and then they are stoic against evil twists of fate.

These poems work much like Kintsukuroi ("golden repairs") used to fix ancient Japanese pottery. Broken pieces of pottery are reassembled with the cracked spaces filled with gold dust.  The broken pieces always remain broken and in full view but they are made beautiful by the emboldened gold dust in the broken spaces.

What was destroyed returns with a new type of beauty and strength, beautiful precisely because of its imperfection.

Mosquitoes are mostly dust
apparently, and return to dust
against my bloodless hand. My heart
is full of water. The sloughs are full.
And my father is here
in Saskatchewan, dying.
Which none of us believes,
although we keep travelling here
and lamenting the latest MRI,
watching him work on this farm
humming constantly
or chanting alleluias -- a habit
my son picks up, along with
"Holy Smoke" and "For Pete's sake."
The boy is four, and his brother, at eighteen
months, will not have a memory
of this or former travels West.
The younger, conceived after
the cancer struck -- our defiant
gesture against death -- has helped
advance that of my marriage.
Also, he is -- they are -- beautiful.

For the third year running there is a wet spring.
The sloughs, as I said, are full --
ducks and even muskrat
have returned from my childhood
thought not the cattails, too far gone.
The crops will be glorious. If there is no hail
or other act from the active God
to follow this fertile season.

The mosquitoes love my baby.
Bites and welts all 'round, but most for him.
They are injecting him with dust.

Have I mentioned the sloughs here this year? They're full.

Nights, my father is haunted by the past
and ghostly future. His own mistakes,
his father's, and his son's -- these he cannot
put aside. Mostly they have to do with land:
selling too cheaply, or at the wrong time.
With being cheated. With being taken in.

Though he is more horrified that he has "hurt people."
It does not matter that he is not the only one.

I ask if he fears retribution
or the possibility of ceasing.
Both.

We turn the earth, attack weeds, sow the garden
as if no one were dying, since we all are
in purest disbelief.
And I have brought two more men into the world
to feed worms and travel through the guts of a beggar.

The spade fills and empties.
Our hands fill and empty.
The brilliant sky may be full
or empty, depending
where you take your stand.

Chantel Lavoie has some discerning dance moves, her poem "Goliath" is a good case in point.  This tale of the biblical giant comes from the perspective of his mother, who loves her gentle behemoth, worries about his army days.  Lavoie has a beautiful precision with little heavyweights of perspective like "Goliath".

Lavoie isn't the least bit hesitant to step across the obvious voids and fill them in with reason.  There is a hearty core of common sense inside this work.

Our morning read was a vibrant affair.  Everyone here wide, wide awake from the -33 C windchill that walked them to the office.  Yes, it is all scarves and rosy cheeks and eyes wide open.  Kathryn, our Jr. Editor, was in particularly fine form this morning, poetry smitten and long johns with a flap.

The ship and the fog held me. Laudanum.
Who can say where I was
then, who now on
my quest for another guest.

I added a gloss to my loss, knowing
faced with history there are choices:
forget it or forge it.
Dreams
visions
fragments
happen.

The ship's ribs ached and the bird
beyond pain turned to jewels. And I was
alone on the sea.
It was me, and
my damning sin.

If there is a moral it is not penance
or community, but enduring the self.
Learn to drink salt.
Lick your own wounds.

Where the Terror Lies is a master class, surprises abound.  We loved it.

ABOUT THE AUTHOR
Chantel Lavoie’s work has appeared in such journals as Books in Canada, Arc, and Contemporary Verse 2. She grew up on a grain farm in Saskatchewan, and has since lived in Guatemala (briefly), Ottawa, Toronto, and now Kingston, Ontario, where she lives with her two sons. She is an assistant professor in the English department at the Royal Military College of Canada.