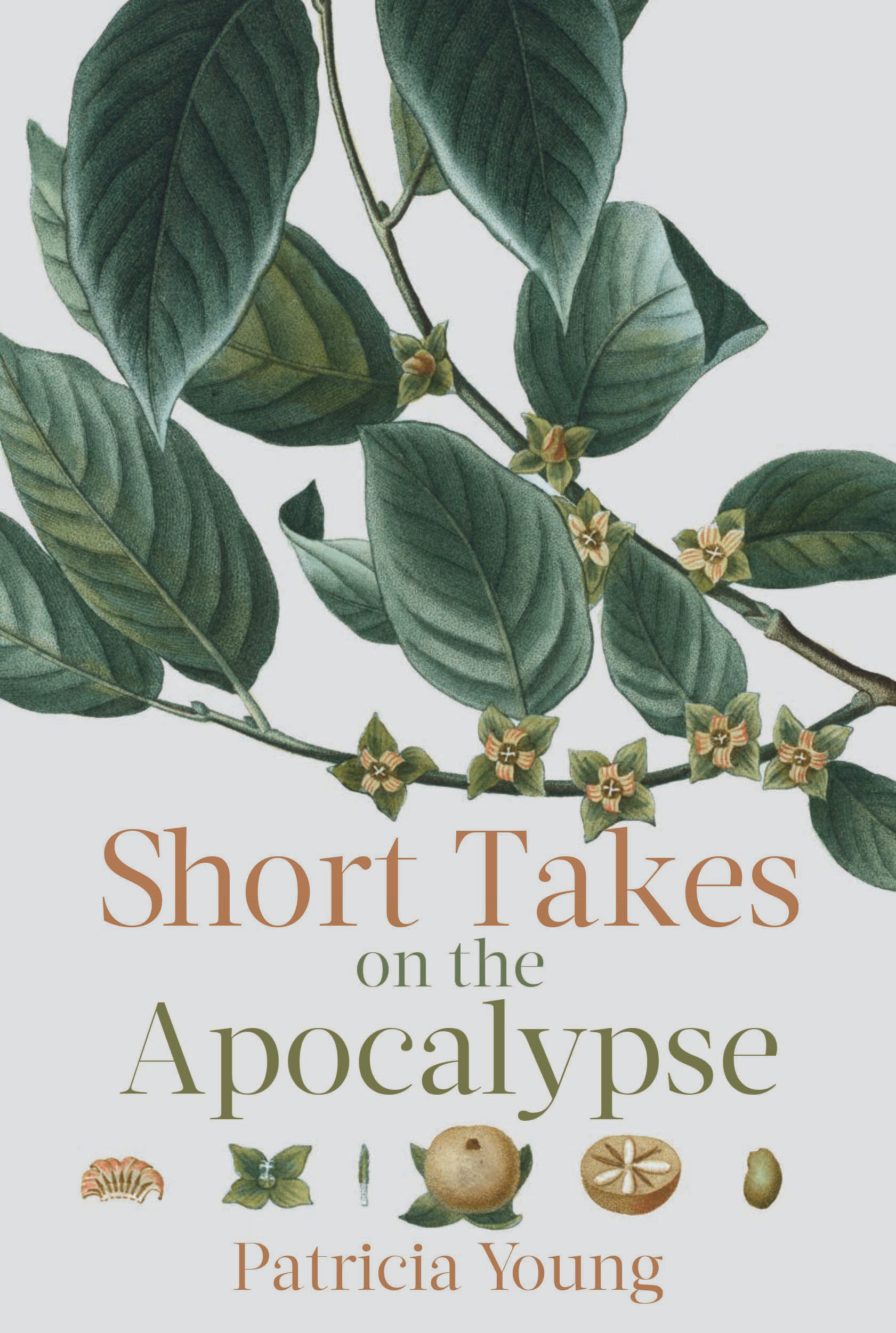 Patricia Young is the author of eleven previous books of poetry and Today's book of poetry has had our eye on her work for a long, long time.  We had Milo, our head tech, check the stacks this morning and much to our disappointment he came back with a miserly three Patricia Young titles, Melancholy Ain't No Baby (Ragweed Press, 1985), What I remember from my time on earth (Anansi, 1997) and Night Eaters (Quatro Poetry, 2002).  After reading her latest, Short Takes on the Apocalypse, Today's book of poetry is reminded how much we admired this poet's work.

Short Takes on the Apocalypse isn't a party trick but this book does have a catch; each poem begins with some sage epigraph from a resplendent group that ranges from George Bernard Shaw to Marilyn Manson to Kurt Vonnegut.  It all works.  Somehow Young is able to use these witticisms as a springboard and once she takes to the air all sorts of marvelous hell break loose.

Tornado In The Bible Belt

Strong southerly winds tore through the upper atmosphere. Hot air
clashed with cold. High-speed gusts rotated around a calm centre,
and then a funnel-shaped cloud was sucking up dust and debris and
a small child--my child. For twelve minutes his body spun like a
blob of butter inside nature's blender. I cursed God and the complex
interactions between updraft and surrounding winds, cursed the
third layer of dry air and His vortex howl. How dare the Almighty
sweep my boy up, then drop him like a cigarette butt far from the
house. All night I searched the fields. Searched and searched until a
voice rang out of the blackness--I am safe in Jesus' arms. And then
silence unlike anything I'd ever known.

Short Takes on the Apocalypse, Young's twelfth book of poems, is an exploration.  Young is looking at it all; love, sex, death and her Hungarian grandmother.  Young brings a masterful poise to her narratives, these stories resonate so true - and that would be good enough - but Young is so much more.

This is funny stuff, biting and instructive.  Young has experience and wit and this book swells to bursting with both.  We laughed, we cried.

I don't believe in an afterlife but I still fully expect
to see my brother again.
- Maurice Sendak

It doesn't matter where I go, what clothes I'm wearing,
which way my head's turned, north or south, if my mouth's
open or shut, if I'm awake or dreaming, I'm always with

you, on a bus in an eastern European town. Same overcast
sky, same up-turned cart in the middle of the road, hay
spreading across pavement, a donkey and farmer, shoulders

slumped: stance of unspeakable resignation. Time's lost
or frozen, the traffic's blocked and the bus driver's cursing
in a language so luminous with rage we understand every

Wherever I go a dull wash is descending upon the same
mud-splattered scene. We're twenty-two, we're forty-five,
we're sixty-eight, but no matter, day will lurch into night

and then into another day, the seasons will shift, the planets
align, the spilled hay will be cleared for passage, the driver
will sat back down, his diesel engine will sputter and combust,

we'll look out the back window as farmer, donkey and cart
grow small, then smaller, the dead will chatter into
the vanishing point. The bus will continue down the road.

It occurs to us here at Today's book of poetry that Young must be some sort of serious reader of the highest order to have found the range of epigraphs that frame these poems like paintings.  As it happens these poems are painterly, Short Takes on the Apocalypse is like a grand vernissage curated by Young.  It's a life story and Young doesn't flinch for a second, her panorama covers the past, present and future.

A father is always making his baby into a little woman.
And when she is a woman he turns her back again.
-Enid Bagnold

In his shirt pocket, a package of Gitanes. I loved that package.
Wanted to be the Spanish lady shaking a tambourine. In Canada
my father became the model immigrant. Worked hard. Built
chimneys for a living. The feather in the cap, he'd say, his accent
stubborn. He laid brick, stone, concrete blocks. Climbed ladders
to the sky. He was king of flues and updrafts. Threw his little girl
into the air. So proud of her English. How she pronounced spark
arrestor, wall thimble, directional cowl. I was polished and pretty. At
sixteen landed a bit part in Rossini's La Cenerentola. On closing
night, kissed my backstage hero inside the folds of the velvet
curtain (how did my father know? what did he see?). When the
applause stopped, I was shipped off to Eastern Europe to die like
the grasses, rot in the earth.

Squatting before the hearth, my Hungarian grandmother ate
meaty potatoes right out of their skins. Scrubbed the floors of her
cramped apartment with a vile-smelling soap. Squirted vinegar
on the windows. Wiped them down with crumpled newspaper
until the glass squeaked. Sometimes I'd catch her looking at me
as though she understood my fundamental flaw. Her words were
foreign and disjointed and pierced with disappointment. At night
she wept. The delicate sound of her sadness was hard as nails.
She still longed for her son, my father. All those years later she
still missed the man I now hated. And such hatred! Ferocious.
Operatic. It rattled my bones.

I returned home to find him asleep on the front porch, big grey
wolf guarding the door. An empty bottle of plum brandy tipped on
its side. I shook him. Nudged his leg. He was still handsome in an
aging playboy sort of way. The cab driver, watching from the street,
was waiting to see me safely inside. I wanted to run back, ask him
to take me away. Instead, I slid down beside my father and began
to talk about my years in Budapest. How I stopped eating. Took up
smoking. Grew to love my grandmother. I talked about my soul-
deep passion for the backstage boy who'd painted the backdrop of
Don Magnifico's rundown mansion. You almost killed me, I said,
and pulled a blue and white cigarette package from my purse. My
father roused. Opened an eye. Squinted. He looked at the faceless
gypsy woman with a clinical and tender curiosity.

Our morning read was excellent.  How could it not be?  Both Milo and Kathryn, our Jr. Editor, made lists of the names Young referenced.  They are both determined to be good readers and are willing to jump off of any springboard they can find.

Young, a Governor General Award short list nominee, twice, is a true pro.  Every poem in Short Takes on the Apocalypse stands on it's own, adds some light where there was dark. 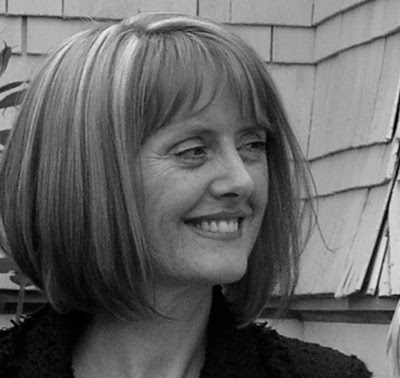 ABOUT THE AUTHOR
Patricia Young is the author of twelve books of poetry, and one book of short fiction, Airstream (Biblioasis, 2006). A two-time Governor General’s Award nominee, she has also won the Pat Lowther Memorial Award, the Dorothy Livesay Poetry Prize, the CBC Literary Competition, the British Columbia Book Prize for Poetry and the League of Canadian Poets National Poetry Competition. She lives in Victoria, British Columbia.

BLURBS
“Young is a masterful technician. She masons each brick into place just so. …She thrives on ambiguity and twists while fostering a rapt interest in them in the reader.”

“With her sure hand wielding the knife of understanding, Young cuts not just to the bone, but well beyond into realms that transcend the here, the now and the merely personal.”
— Monday Magazine

“Accute and quirky observation which cumulates at insight.”
— Freefall