My Favorite Tyrants - Joanne Diaz (The University of Wisconsin Press) 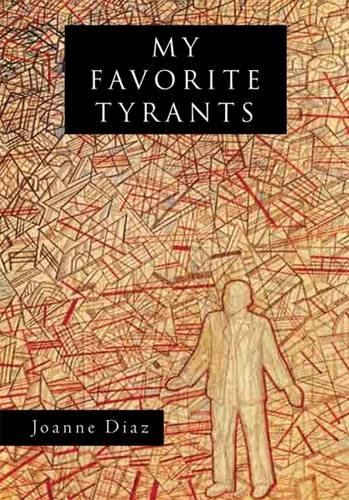 In the past few weeks Today's book of poetry has been in narrative poetry hog heaven.  You'll remember that we recently wrote about B.H. Fairchild and his The Art of the Lathe and were seriously gob-smacked.  I've already warned you readers that a David Lee feature was in the offing, as well as a double-header from the indefatigable David Clewell.  And now Joanne Diaz.

Diaz is no drop in veracity or tenacity from these monsters.  My Favorite Tyrants is outstanding.   Diaz spends no time on false drama or proselytizing, instead she spins such exacting and true sounding tales we are forced to remember how good poetry can be.

To get there, drive past Hajjar Elemenatry School,
named after the child of Lebanese immigrants
who lived here his whole life and died as the much-loved war hero
and town physician. Coast past the ditch where the now-filled
Middlesex Canal once transversed the town lines of Billerica,
Burlington, Winchester, Cambridge, and Boston, transporting
raw cotton in one direction and colorful textiles
in the other. Take a left at the corner of Call and Pollard,
there at the house of Asa Pollard, the first man to give his life
in the Battle of Bunker Hill, twenty miles southeast of here.
Follow the necklace of shabby little ranches on Pollard
until you get to the town center, then drive around the rotary,
built around the tree beneath which George Washington
allegedly sat -- is there any town in the former colonies
that doesn't have such a tree? -- and keep turning
past the old town hall, which is the new library, then
the old library, which is now the senior center
where she got her flu shot the day before, then past
Sweeney's funeral home where she is now, in the basement,
beneath the hands of the mortician who injects her veins
with the formaldehyde that will preserve her until the next day,
when the hearse will drive her coffin to a plot that is being dug,
past Taylor Florist, where they will charge four hundred dollars
for a spray of lavender wrapped with cheap ribbons that say
Mother and Wife, to Jim's where you can see my father
getting his first barbershop haircut in forty-eight years.
The sideburns, already, are not to his liking, and the razor's edge
feels a size off from her Oster home barbershop razor,
and the plastic sheet that covers him now is so uncomfortable
compared with the flowered bed sheet that she used, stained
purple-brown as it was from years of her own home coloring treatments.
If you listen, you'll hear him tell the barber that he hasn't been
to a barbershop since 1961, but now that she is gone, he guesses
that this is what he'll have to do. In these first days, he's relieved
to be with strangers. With them it is almost easy to say,
My wife has died in this, his new language.

Joanne Diaz digests this bitter earth and then voices, in songs we recognize, songs we'll remember, the necessary journeys we take to make a family.  My Favorite Tyrants is much bigger than just family, Diaz also manages to work in some geo-political fanning of the flames.

Death is a big Diaz theme but she looks beyond the simple dark mystery and talks to us with reasoned empathy, tearful sympathy and breathless curiosity.  Diaz does all that without ever raising any maudlin excess.

The poems where Diaz talks about the death of her mother resonate with a clean and vibrant hum.   Remorse, respect, loss, wonder.  Diaz works all of them into narratives that play out so true you might think you already know the story.  You don't, but the real truth always sounds familiar.

Last night, I alluded to my years as a Camp Fire Girl
and Averill revealed that she had been one, too,
and after she made the sign of a fire rising from her hand,

I light the candle of love. How many times
did Lori Dembkoski and I giggle
during those camping expeditions in the backyard

of Mrs. D'Angelo, a kind woman who seemed to have invented
recycling when she filled her old knee-highs with soap chips
and knotted the ends to tree branches; when she poked

holes in gallon jugs and forced twigs into them
so that we could start and stop the water
as the jugs swung, unwieldy, from low branches;

when she told ghost stories that originated in her own house.
After a few years, Mrs. D'Angelo left us for a job
in Pennsylvania, and our new troop had to meet

in the low-ceilinged cafeteria at the middle school
where we resigned ourselves to cutting ochre-colored felt
amidst the stench of Tatter Tots. I don't know how long

it took for a janitor named Connie Rock to find us,
but our encounters with him in the hallway
did offer surprises. One week he'd kneel down

to compliment our felt handiwork and knee-socks;
another time he'd ask us to sit on his lap just for a little while;
and eventually we kissed him on his sallow cheeks

that were soured and lined with decades of hard drink
and smoke. One night, when all the parents
came to the cafeteria for an event

not worth the remembering, Connie found me
and called my name, and I went to him as I had
in the weeks before, I imagine now that my mother

saw then: the red sash full of badges that she had hand-sewn,
the blue hat that featured a small bright bird;
my smile at an old janitor as he cradled me on his lap

and smiled back, as if I were Persephone and he were Hades,
just after he had pushed through a cleft in the soil to steal me.
It took only a moment for my mother to seize my wrist

and hurry to the car. Mother, if I thanked you too little,
know that tonight I remember your besting of Demeter's speed,
and that you saved me from a lifetime of winters.

Our morning read was a stunner.  Earlier this morning Kathryn, our Jr. Editor, made every one of us listen to/watch the P.J. Harvey/Bjork video of the old Rolling Stones tune "Satisfaction."  Everyone in the room was on the edge of their seat.  Kathryn was convinced the video would be the perfect opener to a reading of My Favorite Tyrants and she was right.  Diaz brought down the house.

Diaz has a fascination for the American producer/actor/writer Larry David.  Larry David was the head writer for Seinfeld and then was the primary attention getter in Curb Your Enthusiasm.  I expect you readers are like me and reside in the love/hate faction for Larry David sentiment.  Diaz doesn't skip a beat as she culturally appropriates his skinny ass for a meeting with Antonin Artaud. In the real world I would pay anything to see that meeting.

On the Meeting of Larry David and Antonin Artaud

In my dream, Antonin Artaud is a patient
at Bellevue, receiving electroshock treatments
for the schizophrenia that shattered him
for all of his adult life, and Larry David
has come to see him during visiting hours.
Antonin's eyes reveal a man who on most days
is frantic beyond reason, but today, Larry's
the one who's at the end of his rope.
He's just starred in his first feature-length film
and it's a flop. He knows he should never
have taken a role written thirty-five years ago
and intended for Zero Mostel, that great
heaving sweat machine who died too soon
to play the part. Larry's a writer, a comedian,
but no actor, and now he's stinking up
an already terrible movie. Even worse,
Larry's wife has left him -- not just
in the TV show, but in real life too, and all
because he probably complained too much
about the environmentally sound toilet paper.

At first, it might seem unlikely that Larry
should meet this great French surrealist.
But Antonin had a soul that could find the meaning
and fulfillment of its perfection only in its own disaster,
and in this regard, he and Larry are twins
born of the same seed. So when Antonin
sees Larry insult a nurse, trip on the foot
of a demented patient, and swear out loud
three times as he crosses the floor of the ward,
Antonin feels delight, perhaps for the first time
in years. Finally, a man who might slice
the veneer of bourgeois reality in two!
Larry is also having a good time. Blind
to socioeconomic distinctions, oblivious
to mental illness or wellness, Larry is pleased
with Antonin's frenetically spun moustache
and pulls on it in the hope that it's a fake.

In a few minutes, visiting hours will end,
and Larry will return to the lonely world
outside, the one that Antonin abandoned
years ago. The men look out the window,
first to the East River and the barges floating
downstream, and then, beyond the water
to the length of Long Island City, the old
PepsiCo sign a halo of bright red curves.
To Antonin, the sign is an interminable Rorschach test,
the answers to which he will never know.
To Larry, it is a reminder that he is thirsty.
When he goes to the vending machine
he loses his change after he pushes the button.
He walks away in disgust, and just as he
is about to leave the ward, he hears
the rubbery footfall of the nurse
whom he had insulted only minutes earlier.
She pushes the same button and gets two Pepsis,
but will not give one to Larry, who takes out
his small notebook to resume his endless work.

My Favorite Tyrants is a pleasure to push.  All you poetry junkies need this fix. ABOUT THE AUTHOR
Joanne Diaz is the author of My Favorite Tyrants (University of Wisconsin Press, 2014) and The Lessons (Silverfish Review Press, 2011). She teaches at Illinois Wesleyan University.

BLURB
Forged of equal parts brains and brass, these poems bleed and shine and all but blind us. How wild they are, how beautiful! I love the way Joanne Diaz uses light and noise to tell us more than any history book can of the tyrants who distort yet give meaning to our lives: Castro, Stalin, Our teachers, our parents, ourselves."
-  David Kirby