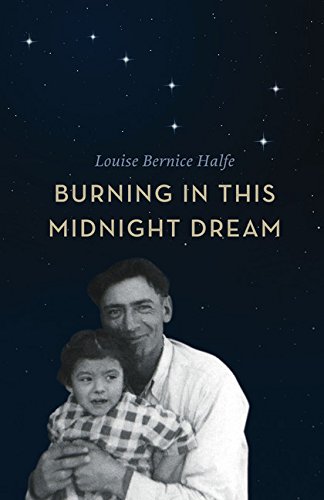 Louise Bernice Halfe Sky Dancer has published a fourth volume of poetry, Burning In This Midnight Dream, and it is a burning indictment, a hushed prayer, an angry account.  Burning In This Midnight Dream articulates some of Canada's worst history from the inside looking out.  These poems are an insider's nightmare memories of Canada's residential schools.

Halfe/Sky Dancer is a quiet poet of considerable reserve yet these poems rumble with thunderous revelations that reverberate off of the page, run up your arms and attack your guilty heart.

I listened to outrageous laughter
there by the stone-carving shelter
where children painted and listened
to Alex Janvier.
Year after year
on the grounds of Blue Quills
I shared a tent with a friend and we told stories
of those lonely nights and how we preserved
our broken Cree.

I walked, ran, skipped
swore and sang the fourteen miles
from that school all the way to Saddle Lake.
We were told by our guide to meditate, be silent
in our walk. How could we after our voices
where lost in the classrooms of that school?
When I reached my home reserve
the Old Ones received me
and danced me on my blistered feet.
Water, tea, fruit, bannock and deer stew.
What food would heal this wound
bundled against my back?
A child still crying in those long school nights.
I know of a man who still carries his suitcase,
began at six, now sixty years, carrying
those little treasures of home
that was forever gone.

Burning In This Midnight Dream is a peat fire of poetry.  You don't see any flames on the surface but you know for certain that you are on hot footing and that all is ablaze underneath, smoldering and determined.

Halfe/Sky Dancer has included several family photos along with the text and this case is the exception that proves the rule about photos and poetry.  These photos are necessary.  The poems work just fine on their own, they are all strong, exude the strength of a brave survivor, but these photos make the stories blood, flesh and bone.  We see the young children in a new and different context, we see them as clearly as the "boy in the striped pajamas," the red-coated lost girl in the opening frames of Steven Spielberg's Shindler's List.  The fine and perfect faces in these photos are calling out through these poems.

An uncle shot his wife
left her lying behind the house
with the rifle at her side.
Their four children peered
behind the curtains.
He was never able to look at anyone.
A lake held him as he froze, standing,
clutching his traps.

One son joined the marines
a mosquito killed him in Vietnam.

In a police chase another son
hit a slough and drowned in his grave.

Their little brother slept in a flaming
house with needles, spoons, heroin and cocaine.

My cousin was left alone.

Our morning read here in the Today's book of poetry offices was a little more sombre than usual but that's not to say we didn't enjoy the poems.  We certainly respected them.

Louise Bernice Halfe Sky Dancer wants the Truth and Reconciliation process to succeed.  Burning In This Midnight Dream is an honourable attempt to plow as much truth into the open as the open can bear.

Today's book of poetry is interested in the poetry of things before the politics and Halfe/Sky Dancer covers all those bases with verse that creates drama and tension while still being able to cradle quiet moments of tenderness and hope.

Weeds are flattened beneath last year's tire tracks
others lay burden by the winter's heavy snow.
The crocuses labor through this thick blanket.
I am sun drained from the bleakness
of the weeks before. Now a tick
I've carried in my hair runs up my neck,
festers on my chin.
I show it no mercy.

the lake-ice is rotting diamonds
where water seeps hungrily through its cracks.
Beneath the birdfeeders
goldfinches and juncos scratch.
Two mallards strut
crane their necks for the roving dogs and cats.
Sharp tail grouse lay low in the thicket believing
they cannot be seen, their rust-colored wings
match the frost-bitten ground.

This morning we were woken by a knocking
on our skylight, the yellow feathers
of a flicker splayed against the window.
I cradle a striped gopher, it heaves so slightly
against my palm, a leg broken
and one eye bloodied shut.
I lay it against the mountain ash and beg
it not to suffer.

This afternoon I have my hearing
for Truth and Reconciliation.
I must confess my years of sleeping
in those sterile, cold rooms where the hiss
of water heaters were devils
in the dark.

I want to walk these thickets
to that far horizon and not look back.

The damages inflicted upon Canada's First Nations community by the Residential School program will never be over.  Generations have been ham-strung by endemic racist policies and implementation of said policies.  Louise Bernice Halfe Sky Dancer illuminates some of that dark night with Burning In This Midnight Dream.  This is the sort of poetry that does move us all one step closer to understanding and true reconciliation.

There is still a long, long way to go but underneath Halfe/Sky Dancer's laments there is hope, astonishing hope.

ABOUT THE AUTHOR
Louise Bernice Halfe was born in Two Hills, Alberta, and was raised on the Saddle Lake Reserve. Her Cree name is Sky Dancer.

With the publication of Burning in this Midnight Dream in April 2016, Louise has four book publications to her credit. Bear Bones & Feathers was published in 1994. It received the Canadian People’s Poet Award, and was a finalist for the Spirit of Saskatchewan Award. Blue Marrow was a finalist for the Governor General’s Award for Poetry, the Pat Lowther Award, the Saskatchewan Book of the Year Award, and the Saskatchewan Poetry Award. The Crooked Good was published in 2007. She was awarded third prize in the League of Canadian Poets' national poetry contest and was Saskatchewan’s Poet Laureate for 2005-2006.

Louise has a Bachelor of Social Work, and received an Honorary Degree of Letters (Ph. D) from Wilfred Laurier University. She currently works with Elders in an organization called Opikinawasowin (“raising our children”). She lives outside of Saskatoon with her husband.