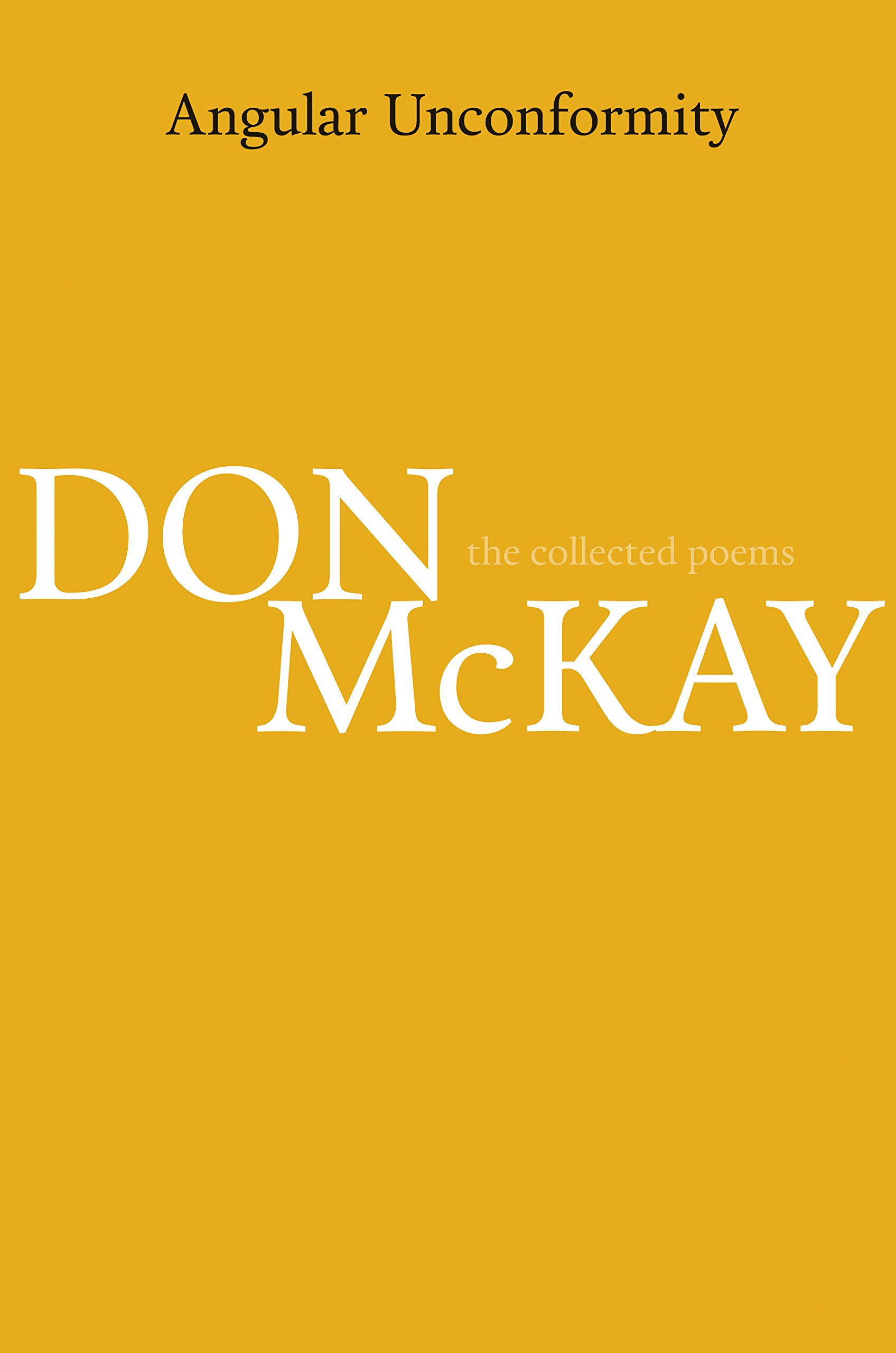 Angular Unconformity means a particular gap between two known strata of rock in a geological formation, at least that's what Milo, our head tech, came back with.  It is the space that occurs between what we know for certain and what we want to believe is true.

Today's book of poetry's personal adventure with the excellent poetry of Don McKay began over thirty years ago in a class on the "long-poem" taught by that Black Mountain/Tish poet Robert Hogg. It was in that class where I first read McKay's Long Sault.

Far more importantly, Robert Hogg's class on the long-poem was where I met the joy of my life, my wife, K.

It doesn't stop there.

It was only a few short years ago that K and I were invited to an elaborate garden party/dinner/BBQ for an old friend who now lives in Newfoundland and Labrador.  Turns out she brought Don McKay with her and I got a chance to meet him.  More accurately, I wouldn't leave him alone until he talked to me.

Since that time I have been lucky enough to share a couple of more meals with the esteemed Mr. McKay courtesy of my Scrabble friend Nurse Rachet.  Don, one of the more humble people on the planet pretends that he is amused by me and I follow him around like a I'm a puppy and he has bacon in his pocket.

We're not exactly buddies but he certainly is a friend.  Long before I met him I wrote my undergraduate paper for the long-poem class on his Long Sault and I have admired his poetry ever since.  In person he is nicer than you can imagine.

For a time, we were
amazement--
they got
this house-moving machine with tires so big I can
show you the picture my brother standing up
inside the hub he is ten years old that can move
a house so gentle they just leave the pictures on the walls--

unfettered, soaring in suspension of feeling.

The rhetoric was
a shepherd to us (though later
we might have said superintendent without sensing
any change) the way
we could be inside its shell but never
really know which history
was being made, and never asking
whose.

The river was about to swell.
It was doing the Charles Atlas course, would be
the servile giant.
Its language was unlocked: Power & Prosperity, Development & Growth.

McKay's Birding, or desire came out in 1983 and hit Today's book of poetry right on the chin, we were smitten.  Tight, allegorical magic/music.

McKay has built an unassailable reputation in Canada for his poetry, wait until you read his bio, but Today's book of poetry would be remiss if we didn't tell you all how often Don's name shows up in the back of other books of poetry, when they are giving thanks.  Don's kind poetry hand has supported and encouraged an army of younger Canadian poets.

From Birding, or desire

To be idiomatic in a vacuum
it is a shining thing!

Would I pass her by again, as always leave her standing with her head
bowed by her locker, looking like she'd forgotten the combination to
everything? Could I tell her now that no one, not the most depraved of
us, deserves high school? Could I explain the way we locked her in our
lust, never speaking to her but only of, and only in the locker room, how
we turned her into a statue of desire? Could I ask her about the feathers in
her locker, taped to the inside of the door? What would I say to that sad
fabulously breasted creature, now that my clumsiness has gnarled? Walking
down the corridor of metal doors to find you crying soundlessly, black hair
pouring, the weight of the combination lock heavy in your hand like --
I see this only now -- the absence of a cock you loved. In memory, I fur-
nish you with drapes, a used fridge and a bedroom suite ($299 at Zellers)
which I carefully arrange around you. On your cold fake marble floor I
lay this old braided rug I bought and lived on later in Saskatoon. Here
on your coffee table (slightly scratched, half price) I am leaving my copy
of The Birds of Canada. And listen: during the long industrial softball
double-headers of your future, be sure to look up at the lights in case the
Nighthawks may be up there

flashing their long barred wings they

intersect with shadflies on the ad lib,

moves we never thought of, never made.

Today's book of poetry enters a Don McKay book with the certainty that with eyes and ears open we are about to be amazed.  Angular Unconformity, Collected Poems 1970-2014 weighs in at a hefty fill your boots 584 pages and does not disappoint.  It is a necessary treasure.  We here at Today's book of poetry believe Mr. McKay still has a library of fine poems yet to write but this tome will bring you up to date.

Today's book of poetry is always surprised by how McKay gives us access in his poems.  The topography and subject range always vary but the emotional accessibility is a constant.  The poems are always intelligent whip-quick, as though there were a built-in codex we all knew.

Eventually water,
having been possessed by every verb--
been rush been drip been
geyser eddy fountain rapid drunk
evaporated frozen pissed
transpired -- will fall
into itself and sit.
Pond. Things touch
or splash down and it
takes them in -- pollen, heron, leaves, larvae, Greater
and Lesser scaup -- nothing declined,
nothing carried briskly off to form
alluvium somewhere else. Pond gazes
into sky religiously but also
gathers in its edge, reflecting cattails, alders,
reed beds and behind them, ranged
like taller children in the grade four photo,
conifers and birch. All of them inverted, carried
deeper into sepia, we might as well say
pondered. For pond is not pool,
whose clarity is edgeless and whose emptiness,
beloved by poets and the moon, permits us
to imagine life without the accident-
prone plumbing of its ecosystems. No,
the pause of pond is gravid and its wealth
a naturally occurring soup. It thickens up
with spawn and algae, while,
on its surface, stirred by every
whim of wind, it translates air as texture--
mottled, moire, pleated, shirred or
seersuckered in that momentary ecstasy from which
impressionism, like a bridesmaid, steps.  When it rains
it winks, then puckers up all over, then,
moving two more inches into metamorphosis,
shudders into pelt.
Suppose Narcissus
were to find a brown pond
to gaze in: would the course of self-love
run so smooth with that exquisite face
rendered in bruin undertone,
shaken, and floated in the murk
between the deep sky and the ooze?

This morning's office read was legendary.  The Today's book of poetry offices were over-run with poet traffic this weekend.  Poets Justin Million and Elisha Rubacha from Peterborough spent the weekend here on Dagmar.  They are the heart and soul behind bird|buried press.  They scoured the stacks and were able to find poetry to take home from our "extras" shelf.

On Saturday Robert Hogg came by to say hello.  You might remember Robert Hogg's fine books Heat Lightning, Of Light, Standing Back and There Is No Falling.  I had Milo go back in the stacks and bring out some Robert Hogg material that wasn't signed.  It's signed now.

Today's book of poetry wouldn't want to put words in Robert Hogg's mouth but we both agreed that Michael Ondaatje might be the best Canadian poet.  We also agreed that Don McKay was Canadian poetry royalty, although I'm sure Don would never see it that way.

The visiting poet vibe was all over the office this morning and it showed in the reading.  Mr. McKay would have enjoyed it  -  we certainly all enjoyed Angular Unconformity. 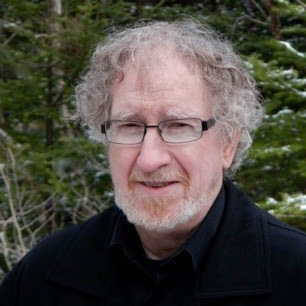 ABOUT THE POET
Don McKay has published numerous books of poetry and several books of essays. The poetry has been recognized with a number of awards, including two Governor General’s Awards and the Griffin Poetry Prize. His most recent book of essays, The Shell of the Tortoise, received the Winterset Prize for Excellence in Newfoundland and Labrador Writing for 2011. Paradoxides, his most recent book of poems, winner of the E.J. Pratt Prize for Poetry, includes meditations on geology and deep time, while pursuing ongoing obsessions with birds and tools. He lives in St. John’s, Newfoundland.