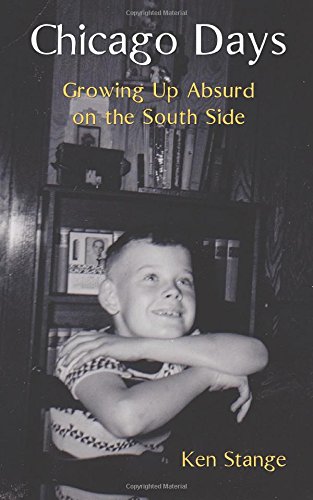 Several weeks ago Today's book of poetry received the late Ken Stange's autobiography Chicago Days - Growing Up Absurd on the South Side in the mail from Ken's widow Ursula.  Published posthumously Chicago Days tells us everything we need to know about the early years of Stange's life.

Today's book of poetry is proud to give Chicago Days some space and attention on our blog simply because Ken was our friend but it is poetry we are interested in and the very productive Ken Stange left us nineteen volumes of published work during his all too short visit to our planet.

Today's book of poetry first met Ken Stange when I was installing a project titled Wired in the White Water Gallery for the late artist Chris MacGhee.  Ken, if I remember correctly, was on the board of directors for White Water and was there to help smooth the waters.  After the installation he showed us where the beer was at.  Then the books started to arrive wherever it was I was living.  I had Milo, our head tech, check out the stacks and he came back with nine books of Stange's poetry.

They will have to do as a tasting menu.

Here are my nine:

When going through this beautiful pile I found a letter from October, 1980 that Ken had sent me stuffed between the pages of Nocturnal Rhythms and it contained an unpublished poem.  I'd like to share it with the Today's book of poetry audience.

Looking At A Photo Of A Lady I Once Knew (Camera Work 2)
.
.
for Michael
.
.
Your body's landscape is brightly lit by fluorescent
floods.  Your regional forests are partly cleared, freshly
groomed.  Your irregular contours-recently airbrushed
smooth.  And your silicone topography reshaped
by old men's lust.
.
When I look at you
my mind's eye
Blinks.

Ken Stange was an important friend for me and a great supporter.  Over the years I invited Ken to read at every poetry series I had a hand in.  Audiences loved him.  Ken commanded a room with such a gently assured manner so full of confidence that you knew right away that he was "one of the good guys" as our Southern correspondent the Twangster might say.

K is For Koans
.
.
1. Where is the smoke in your cigarette before it is lit?
(Man could just as easily not have evolved.)
.
2.  Where does your wife go after she leaves you?
(Only false disagreements are ever resolved.)
.
3.  Where is the life in a fire that's been doused?
(A scar is one kind of memory.)
.
Or alternatively:
.
1.  Where is the poem before it is written?
(The unicorn was a definite possibility.)
.
2.  Where is the poet once the poem is written?
(At the harvest feast you don't thank the hoe.)
.
3.  Where does the poem go after being erased?
(True education is forgetting what you know.)
.
.
.
(from Cold Pigging Poetics)
...

Ken Stange often floated in the world between poetry and science, for his autobiography, Chicago Days he offered this up:

"I believe that literature, like science, is a way of
exploring different perspectives; and I believe that the
results of these literary explorations, like the results of
science, are always inherently tentative.  It is for this
reason that I choose to call my major works hypotheses.
Chicago Days: Growing Up Absurd on the South Side,
completed 10 November 2015, is Hypothesis 20."

Today's book of poetry was always quite willing to trundle off and down whatever road Ken Stange wanted to venture because it was always a learning process I enjoyed.  The surreal connections Ken made between poetry/art and science were always invigorating but we were always most moved by his very human heart.

.
.
My Uncle Speaks of Middle Age
.
.
I waited like a drunk philosopher
for the clarity of the morning-
after...
.
I traveled such a very long way
before meeting my personal limits
halfway...
.
I prepared like a vestal virgin
for the great sacrifice of my hopes
to time...
so thus

.
it is
this quiet disillusionment comes a surprise:
I'd expected so very much more
.
pain.
.
.
.
...a bad place to live, It is good to be close enough to see over the edge
into the abyss, but it is not wise to try to spend one's whole life dancing
along the precarious line.
.
Oh, I've been as close to insanity as you, but I've backed off now. After
Diane's abortion I learned to maintain a balance between order and
disorder. (What I needed to learn was order; disorder came naturally.)
Every time in my life when order and rationality and the bourgeois vir-
tures begin to predominate, I naturally inject some disruptive element. It
may be a woman. It may be an illness. It may be a dangerous game.
Because, like you, I've always subconsciously feared contentment, I have
repeatedly disrupted my own happiness.
.
I guess this is a way of attempting to regain youth, for what're the salient
characteristics of youth? Turmoil and disorder. One's senses are sharpen-
ed, one's reflexes quickened, by stress and anxiety. The struggle to im-
pose order in a tumultuous world sharpens one's wits; too great a success
in this struggle dulls them.
.
Some men take up dangerous sports, such as white-water canoeing or
sky-diving, for the above reason. Some men have love...
.
.
.
(from Bourgeois Pleasures)
...

Today's book of poetry has always enjoyed Ken Stange's books and are dismayed by those we have yet to find.  Here is a list of Ken's other titles:

Ken Stange was an American who chose to be Canadian, a teacher, a poet, a husband, a father and he was my friend.  Not that many of us get to leave such a fine and compelling history of our time on this hurtling orb. 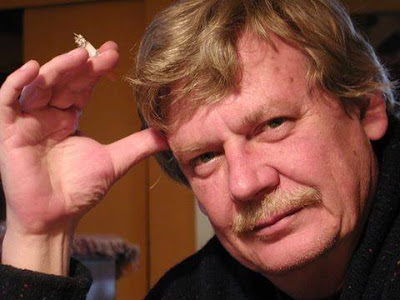 ABOUT THE AUTHOR
Ken Stange is the author of twenty books of poetry and fiction, hundreds of publications in literary and scientific journals, and the winner of the 2011 Exile/Vanderbilt prize for short fiction.  He is also a visual artist and Professor Emeritus at Nipissing University. His special interest is the relationship of art and science and creativity.  He has learned to appreciate absurdity.