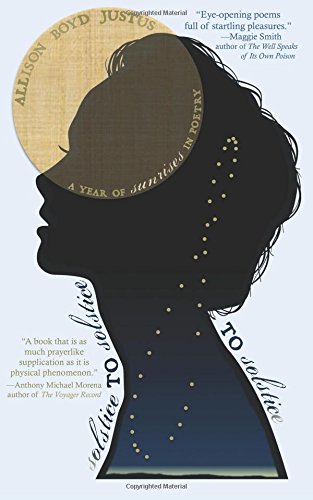 "Light is the Magellan, the finder out,
the journalist, the diurnal diarist, the
tell-all.  Light works with what it has,
and it does not wait."
from Sunrise 181
5:30 a.m.  JUNE 19

These short narratives are a literal and an imaginative exploration of light.  Justus is all about the small details as they are revealed by first light.  The revelations revealed by changing firmament, the darkness yielding, becomes the fuel and substance for these meditations.

The river wound away into the dark,
and the darkness
was holy and clear, celebrated with stars,
streaked with Leonids.
I stayed out the whole night,
all talk and no fire,
all yearning awe and
expectation.

Past four we decided to wait for the sunrise,
though we'd forgot
which way was east.

We shivered, welcoming
the faint warmth, the shimmering, and then,
when the sky couldn't hold the sun back any more--
knife-stab of first ray.

dissolved with dawn's mist.
But we'd waited all night for this -- light brilliant as fact.
I let cold light pierce me:

A sunrise is a sadness singed with ecstasy.

Today's book of poetry really isn't equipped to analyze or assess the philosophical components of Justus's year long exploration but we never felt left behind by these contemplations.  The reader will recognize the view from the red rim although very few of us can claim the same familiarity with dawn.

Today's book of poetry finds much to celebrate and much to contemplate.  Justus has an inexhaustible sense of wonder.  Sometimes that appears as joy.  Justus' need "to see the day breaking" becomes more than a ritual and almost a rite.  We benefit from the perseverance of Justus and end up looking for excuses to greet the dawn ourselves.

Hold it steady, everybody, we'll all turn to-
ward the light--We'll catch the light and
carry it all day. In the morning your skin will
tell stories; your hair will smell like campfire.
The light will come on in, even through
clouds--It may not be yellow and it may not
be warm, but as light is light, it warms you;
this is all you will need.

If you were to go back and look at the previous 603 entries on Today's book of poetry you might find that joy and optimism play a surprisingly big part in the poetry that we enjoy.  Solstice to Solstice to Solstice brings the light and that is about as optimistic as it gets.

Solstice to Solstice to Solstice doesn't read like most books of poetry, it's almost like reading hymns to the light.  But Justus is never sermonizing or sanctimonious, she is ready for awe.  Justus also meets those fog covered mornings with her eyes wide open.  She documents a year of emotional response to the rising sun calibrated by experience, warmed by hope.  Clouds and fog do nothing to diminish Justus' vision, it remains focused and illuminating.

Our morning read was interspersed with requests for specific dawns, specific dates.  It seemed that each of our staff wanted to read what Justus had to say on their birthday.  That exercise quickly catapulted/deteriorated into family birthdays, anniversaries and a plethora of other important personal events, and so on.  It made for a robust and enthusiastic run through Solstice to Solstice to Solstice but it was easy to see how each entry rolled over the room like weather.

The sun is rising with a vengeance: a ven-
geance it's got to be, through all this wind, or
else a hard, even intention to rescue.

Suppose the sun is sentient: it feels the mag-
nificent force of its own gravitational pull; it
wants everything (or pulls like it does, even if
it doesn't); it knows better than we do the
hot fury of its interior and its surface.

The light shines in the darkness, and the
darkness does not comprehend it.

Allison Boyd Justus reminds us with Solstice to Solstice to Solstice of the Wayne Wang/Paul Auster film Smoke (1995).  In that movie the main character, Auggie Wren/Harvey Kietel, takes a photograph on the street outside his tobacco shop in New York every day, always at the same time and always on the same spot.  The process becomes the exercise and what it reveals, over time, is every thing.   Justus, using much of the same methodology, has revealed the same magic by greeting the dawn.  She has brought us the light, illumination, in the quietest and gentlest manner.

Our universe is just that much brighter. ABOUT THE AUTHOR
Allison Boyd Justus grew up in the shadow of Ben Lomand Mountain in Warren County, Tennessee. She once spent a year watching sunrises.

BLURBS
“Allison Boyd Justus performs magic through visceral imagery in her mesmerizing collection, Solstice to Solstice to Solstice. She sets her sights inside and outside each morning where the brilliance resides. Get a copy.”
—Meg Tuite,author of Bound by Blue and co-author of Bare Bulbs Swinging

“In Solstice to Solstice to Solstice, Allison Boyd Justus gives us 366 mornings of sunrises during a single solar year, 366 blank slates, 366 chances to perceive and create something new. These eye-opening poems are like mornings themselves, full of startling pleasures: ‘light brilliant as fact,’ ‘the mountain a shudder,’ ‘a murmuration of starlings rattl[ing] like a tambourine.’ Justus shows us, poem after poem, that each day is a page where anything might be written.”
—Maggie Smith,author of The Well Speaks of Its Own Poison, Lamp of the Body, and The List of Dangers
“What a daunting achievement for Allison Boyd Justus—a full year of waking mornings to shape poetic reactions for our dawning planet. The tension between what her eyes and senses make of dawn and her knowledge that earth is spinning 18.5 miles a second around a star is central to this book. Justus also knows that, at the same time, the red fringe at the edge of the universe is rushing toward somethingness, and that we are in the presence of a cosmic force beyond human comprehension. Yet she maintains a transcendental trust in the human imagination and her personal intuitive vision that grows from a deep sense of wonder. Her responses range from dawn snatches, to yawning dawn wakefulness, to complete poems and inventive personal commentary: from rushed city mornings loud with traffic and train whistles, to the sun, a rose, rising above mountains and rivers. What every entry has in common is the gift of language—witty, sensory rich, poetic, and often prayerful. For Justus each dawn brings new birth into this life, this gift.”
—Bill Brown,author of Elemental, Morning Window, and Late Winter

“Justus reminds us that observation is one of the most important parts of being alive: just noting change and presence. She forces attention to the small things, and even though the sky is the star, the speaker takes on a supporting role. By the end, it seems that both the sun and the speaker have learned something in their year: they’re back where they started, but also further along. There’s something about witnessing dawn, each day—knowing, this is new, and untouched.”
—Micah Ling,author of Three Islands, Sweetgrass, Settlement, and Flashes of Life