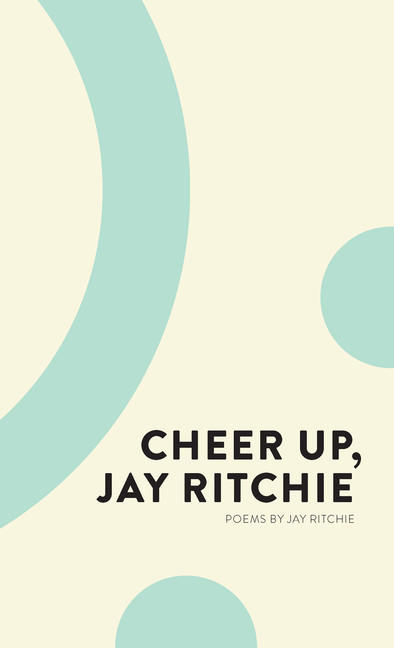 "like an inner tube at a pool party
nostalgic for asphalt."
"Upcycle" - Jay Ritchie

Jay Ritchie has reimagined what Richard Brautigan might be saying were he alive and living in Montreal.  Cheer Up, Jay Ritchie does not emulate Brautigan so much as doff the hat in admiration as it continues along in its Jay Ritchie way.  No disservice to the esteemed Mr. Brautigan, Today's book of poetry holds his work in high regard - but Mr. Ritchie is a richer serving.

Today's book of poetry generally has a difficult time with poetry carved from surreal dreams but like my hero, Stuart Ross, Jay Ritchie operates with such efficiency and sleight of hand that you are at his mercy.  These poems are tangential superheroes and dream-thought riddled with reason.

Cheer Up, Jay Ritchie tries to wrestle the norm out of the daily grind and succeeds with a Cool Hand Luke grin.

requires a series
of short commitments,
the way Highway
I needs to
be reimagined after
each pirouetting pine
tree, the way
an extension cord
needs to be
wound eight times
before it is
a noose. I
made a promise
in the driveway
not to go
inside until I
had sunk twenty-three
baskets consecutively. Light
has a special
way of falling
into polygons in
the waiting room.
The sewage truck
is idling outside
the walk-in clinic
beside the public
library. People fall
out of my
life like oranges
off the back
of a truck.
Residents of Heatherglen
Housing Co-operative Ltd.
were not informed.
A paint stain
on the window
starts to look
modern. The rehabbed
juvenile delinquent said,
Building a house
is just a
series of small
tasks that amount
to something big.
I was out
there in the
driveway until dark.
Here, the Venn
diagram made by
the water's surface
and lip of
the glass. It
was a promise
I made to
luck so that
luck would be
promised to me.

Today's book of poetry had no problem at all believing whatever Ritchie had to say.  These poems rang true, from start to finish, like a metronome.

At the end of the year with my bags asking to be let in to the
present. Single-family detached homes with comparable square
footage curve gradually with the cul-de-sac, as usual. Did you
see the addition to the business park? Nothing hurts like not being
in on the joke. My friends tell me I have a tendency to distance
myself from friends, which is troubling. Walking home involved
a Walmart, an overpass, a business park, real estate, a Catholic
elementary school, and a cosmic sense of purpose determined
by faulty or burnt-out street lamps. This is how I remember it:
I learned geometry from rooftops. I might carry my laptop over
the back deck in the morning with a cup of coffee and consider
how a rainbow's favourite high is gasoline. I might be closer to
what I was walking toward and further from where I wanted to
be. I'm unsure if the leaves are a part of the plan. Airport security
said, The easiest way out is to look for an entrance.

Our morning read was a rapid-fire affair.  Ritchie's poems elevated the mood, the sun was actually shining in through the windows and had Mr. Ritchie heard our din I'm certain he would have been cheered.

Cheer Up, Jay Ritchie is the genuine article.  Ritchie is playing the long game, he strings things out onto a high wire, adds a bicycle, and then a beach ball, and then the elephant in the room jumps onto the wire.  Everything ricochets skyward, airborne, juxtaposed, upside down and clearly doomed until Ritchie juggles them back down to the wire, each one precariously balanced in the good graces of the others.

Jay Ritchie is welcome in the Today's book of poetry poetry kitchen any time.  Ritchie can burn the house down.

Every mourner was given
a blue, yellow,
or green helium-filled balloon
and was pushed out
into the snow-covered field.
Releasing the balloon
into the troposphere
was a symbolic gesture
for the final stage
in the grieving process:
acceptance, or 'letting go.'
How many leatherback
turtles are going to die

from this mass act of littering?
I had done a project on
leatherbacks in Grade 7.
It was the fourth consecutive day
of putting my suit on, and the fourth
consecutive day of putting
ice cream in my coffee.
Three people had died
in one day, and for three days
there was one funeral per day -
except today is different, today
is a celebration of life.
I unparked the SUV

from the half-frozen mud.
What is going to happen
to everyone's nice shoes?
The nonsmokers look so natural
holding their cigarettes.
I wanted to clarify some negative
comments I had made, but I did not
expect to encounter absence,
which is no encounter at all,
just a persistent humming
at the highest audible register
and its root note at the lowest,
making a chord

with idling city maintenance
vehicles. The possibility
that photographs would be
insufficient occurred to everyone
at once, it was unanimously decided
someone would make a DVD.
The Rocky Mountains
had a better understanding
of us, they had seen
the oil barons as heroes
and were less anxious, they said,
Squint, you can see tomorrow
through tiny pinholes in the air.

Today's book of poetry was thoroughly entertained by Jay Ritchie, he certainly cheered us up.  Cheer Up, Jay Ritchie may offer some of the most original poetry you've read this year. 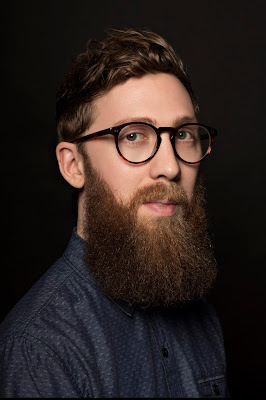 ABOUT THE AUTHOR
Jay Ritchie was born in Thunder Bay, Ontario, and lives in Montreal, Quebec. Cheer Up, Jay Ritchie is his first full-length collection.

BLURBS
‘With their clever – but never glib – concision of image, and emotional directedness, these poems actually make me feel something, and that is something I really enjoy.’
– Rebecca Wolff, author of One Morning—

‘Ritchie throws black holes on the wall, disappears through them. His poems are like dreams dreamed mid-movement, just before something happens, as if light, buildings, breath, parakeets, hope, haircuts, Montreal, and art-making are all fragments of the same epiphany.’
– Sean Michaels, Giller Prize-winning author of Us Conductors

‘Charming, funny, and often elegant. This is a formidable collection.’
– Ben Fama, author of Fantasy