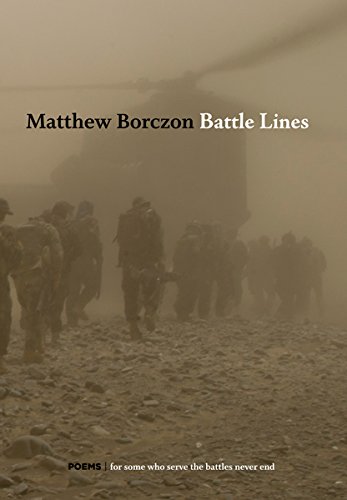 Matthew Borczon writes such pared down verse that at first, you might think something was missing.  There's nothing missing at all.  These poems are as precise as a shot from a sniper.

Borczon worked as a Naval Reserve Hospital Corpsman from 2010 until 2012 when he was diagnosed with PTSD.  Borczon was witness to the horrors endured by over 2,000 veterans under his care.  Clearly their scars left scars.

told me
that my
brothers sat
her down
to say
it doesn't
matter if
you don't
know him
anymore
you need
to figure
out how
to love
him anyway.

Battle Lines rattles the razor edge of a combat veterans memories, all those things a veteran cannot forget.  In Matthew Borczon's world the worst really does happen and it comes from every direction at once and without notice.  Battle Lines makes clear, and we need reminding, that many of the hardest battles veterans face occur when they've come home.

Borczon's therapeutic voice is like a lancet taking the top off the roiling and festering boil, a release of all that putrid conglomeration that infects the memory.  Fear and remorse live here.

It's clear from these poems that we ask too much of those who we put in harm's way.

had tattooed
his squad
number on
his forearm
from his
time in
the infantry
when it
was the
same as
his new
cell number
he asked
me if
I thought
that meant
something
I had
only worked
in the prison
for a
month and
had only
come back
from Afghanistan
the month
before that
so I
told him
I no longer
believe anything
means anything.

Today's book of poetry read through Battle Lines like there was a prize waiting for us at the end.  Borczon doesn't waste one second of your poetry time.  Hopefully each reader will take a little compassion and understanding from these missives.  It's not often a voice from inside the beast can/will/wants to articulate or share their sorrow.  Borczon wants us to sympathize because unless you are battle-hardened you can't empathize.

None of our clan of readers here in the office has ever been close to a battle or a war.  Today's book of poetry saw "skull and crossbones" signs at the side of the road when travelling through Croatia over a decade ago.  Those were the unhappy reminders of active minefields.  And as you regular readers will know, we once heard automatic gunfire in New Orleans.  That's it and lucky for us.  Borczon comes from a different group of citizens.

None the less, we did try to do Matthew Borczon and Battle Lines proud with our morning read.  Solemn and serious.

ABOUT THE AUTHOR
Matthew Borczon was born and still lives in Erie, Pa. He graduated from Edinboro University in 1990 with a degree in fine arts. He joined the United States Naval Reserve in 2001 as a hospital corpsman. In 2010 he was deployed to Camp Bastion to work in their hospital, the busiest combat hospital in the war at that time. There he provided health care to 2,268 coalition and local national forces. Diagnosed with PTSD in 2012 Matthew started writing as a way to tell his story. He publishes widely in the small press. When he is not writing he raises four children with his wife of twenty years, works as a practical nurse for a social service agency and is still a member of the Naval reserve. Along the way he has been a model, bouncer, amateur boxer, martial arts instructor, art teacher to inner city children and a prison nurse. Battle Lines is his second book of poetry.