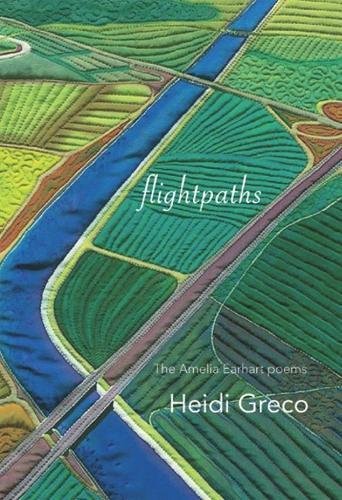 Reading Heidi Greco's Flightpaths: the lost journals of Amelia Earhart is like falling into a Saturday afternoon matinee at the movies of my youth.  Greco has imagined and made real all those things we've so longed to discover about the ending to the Amelia Earhart story, the beginning of the legend.

Greco's done her homework.  Today's book of poetry knew about the "friendship" between the high flying aviatrix and the President's wife.  But Greco takes them up among the stars where they make snow out of one of Eleanor's boas.  Greco reveals dark secrets and hidden gems, jewels for the inquisitive historian.

The theories Heidi Greco expands on as to the demise of Amelia Earhart have been given light of day before but Greco affectionately moves past rumour to give rich flesh and bone back to the narrative.  Just like those afternoon movies of my youth; Greco sets up the audience and then delightfully mows them down.

Made an awkward wade to the plane, for another quick series of maydays.
Dumb luck revealed a little sack of fruit floating beside my seat (how
could I have missed it?), a gift from one of the sweet women at Lae. She'd
handed it over smiling, saying repeatedly "po, po." She should have said
"poo poo" as it's not agreed with me. Shit, shat, shatted. Enormously. I
may have lost more fluids than the soggy fruit supplied. Modesty long
gone between Noonan and me. Even so, this is beyond normal, requires
a skirt. Eleanor and Katharine, my cohorts in independence, would laugh
at how ladylike I've become.

Heidi Greco's Flightpaths: the lost journals of Amelia Earhart offers up more than one solution to the famed pilot's true story.  We deduce that Earhart had an open relationship with her husband and a thoroughly modern and adventurous dance card that spanned both gender and expectation.

These poems fantasize more than one perilous end for Earhart, but any real fan of Earhart, or any ardent reader, will already have heard these theories.  What Greco does that amazes is to create a narrative the reader can and does believe.  We believe the movie as it is playing out in front of us.

With a variety of conjured tricks, Heidi Greco has us eating her fictionalized account of an unknown story right out of her poetry hands.  She doesn't even bother with a poetry bowl.  Greco gets us to believe a thing is true even though we already know it is made up.  That's some good poetry cooking.

This, my new husband

The father sells shoes, shiny as the pomade
he slicks into his thinning hair.
This dull groom of mine welcomes the war,
explains to me, as if to a child,
"An army marches on its feet,"
What am I to learn from this?
Surely, the measuring of feet cannot
fill the needs of his mind.

I would stand with the women
in the factory, if I could.
But no, I am cautioned:
I might show my hand, reveal
some bold trait, one that could draw
unwanted attention. Or worse,

speak out with too strong a thought
one not befitting this pretty head I now wear,
maybe get sent to the loony bin
along with the other hysterical wives,
the ones who didn't behave.

Hair this long annoys me, tangling in the brush,
this continual dyeing of roots to keep them brown,
mouse enough to blend with this dun-colored world
the sentence I must serve, rest of my too-lifeless days.

Oh, for a pinch of danger, a taste of sudden intrigue,
anything to fire up my engines.

Today's book of poetry morning reading was just a little off track today, everyone remains a little subdued and saddened by the passing of the great Canadian poet David McFadden.  Earlier this week David finally succumbed to a lengthy illness.

Stuart Ross, celebrated poet and close friend, has suggested that he is going to read a David McFadden poem at all of his readings in the future.  Today's book of poetry thinks we should all follow the same plan of action.

After a round of David McFadden poems, mostly from Poems Worth Knowing (Coach House Books, 1971), we got back in to the proper flow and gave Heidi and Amelia a proper flight test.

To think I used to mope about the thickness of my ankles, call them my
elephant legs. Bigger than ever the ankle is blooming, like an overfed dahl-
ia in my cousin's flower bed. Now it truly holds the shape of an elephant's
leg, would make a good umbrella stand for someone's elegant foyer. Yet
despite its bulbous shape, it feels as if the bones are disintegrating. As if
the constant salt air has seeped inside and begun dissolving them. Can't
distract myself from the pain anymore. Reciting poems, making up songs,
repeating my times tables, nothing does the trick. Zero times 180 is still
zero. Since Fred no longer needs the pills, I may try using the ones that
remain. What effect they may have on me, I cannot say. Tomorrow I mean
to begin some letters to family and friends. Perhaps a batch of sweet fare-
thee-wells.

Heidi Greco puts belief in the hands of the reader.  We come to believe that this movie is real.  Poetry that transports is a hard currency to deny.  Flightpaths is money.

ABOUT THE AUTHOR
Heidi Greco is a longtime resident of Surrey, BC. In addition to writing and editing, she often leads workshops – on topics that range from ekphrastic poetry to chapbook making. She’s been an advocate for the literary arts in her community and was instrumental in establishing two distinct reading series, but she considers her greatest success to have been convincing her city to hire an official Poet Laureate. She writes in many genres – with poems, fiction, essays and book reviews to her credit. Her books include a novella, Shrinking Violets which was co-winner of the Ken Klonsky Award in 2011. Her work has also appeared in many anthologies, most recently in Make it True: Poetry from Cascadia (Leaf Press, 2015) and The Revolving City: 51 Poems and the Stories Behind Them (Anvil, 2015). In addition to making Sunday suppers for her adult sons, she keeps a sporadic blog at outonthebiglimb.blogspot.ca.

BLURBS
“Flightpaths: The Lost Journals of Amelia Earhart slips easily from windowpane prose to lyric as Heidi Greco delivers the realities, the fantasies, the possibilities of Amelia Earhart’s last flight over the Pacific Ocean with a complex simplicity that gives us both what probably was and what might have been — building a poem/story of a life bigger than history.”
—Brian Brett, author of Tuco: The Parrot, The Others, and The Scattershot World

“In this unique and intriguing fictional tale, Heidi Greco convinces us that Amelia Earhart’s Lockheed 10 Electra went down near a remote Pacific island. This tragic event, and the disappearance of Amelia’s plane into the ocean, leaves the reader wondering what happened to this brave pilot who accepted the challenge of a world flight in 1937.”
— Ann Holtgren Pellegreno, Pellegreno was the first to fly a Lockheed 10 Electra around the world on the Earhart Trail. On July 2, 1967, she dropped a wreath on Howland Island.

“I am not one to read a lot of poetry, but when combined with contextual passages and based on a historical event, my interest was piqued and my imagination stimulated by the fascinating concept that Ms Greco has penned. Recommended.”
—The Miramichi Reader

Poems cited here are assumed to be under copyright by the poet and/or publisher.  They are shown here for publicity and review purposes.  For any other kind of re-use of these poems, please contact the listed publishers for permission.
We here at TBOP are technically deficient and rely on our bashful Milo to fix everything.  We received notice from Google that we were using "cookies"
and that for our readers in Europe there had to be notification of the use of those "cookies.  Please be aware that TBOP may employ the use of some "cookies" (whatever they are) and you should take that into consideration
Posted by Today's book of poetry at 2:22 PM