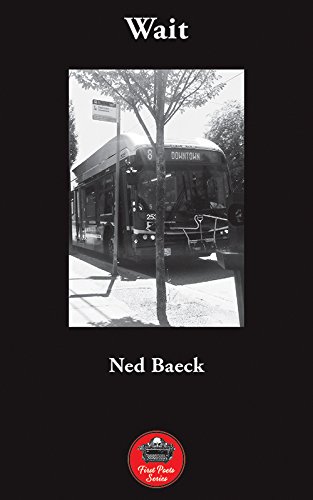 Ned Baeck is down and out in Calgary and Vancouver.  This sort of drinking and poetry and poetry and drinking is suicide.  And from the edge of that precipice Wait mocks and provokes us.

Baeck is bleak and dark and wounded and wild and out of that wolf sneer side of his lucid mouth he's spitting poetry daggers.  Never has a poet so irritated, intrigued and impressed Today's book of poetry at the same time.  It's like Malcolm Lowry and his doomed being "eloquent in their sinking."

I jumped from a bridge
into the Niagara River
on a bright February afternoon.

It was cold as hell, and the crows
were frenzied when the man
with the hair-lip briefed me on murder. I followed
a dark horse, aware of breathing, maybe not,

there was in falling an ascendant peace
too heavy for space.
Don't look over your shoulder—
unwavering as I hurtle from the rail.

Plunged in and shot to the surface
gasping, voices calling me from shore.
Man woman dog. Saw them as I fell.
Claw cold water till I lose consciousness.

A torrent of electrodes
tears a ragged scream
from my throat.
Nothing has names
yet.

People cover me like insects.
I was in the river.

Maybe I will draw the crocus
and vole of spring
emerging from the teeth of the earth.
Word of mouth

for a warm breeze and a choked song:
watching, waiting,
adjusting to the light.

and when the sun sinks from the sky
I give my anxiety to the night,
settle in to undulation,

the stills and tosses
in the water
lit by the moon.
A forecast
for tomorrow:
the law of today, the lack

a voluminous glint
on our troubled path
by the highway.

The idyll
is a wrecking yard
and the hospital
can't hold you.

Nor mother nature,
though she is,
softly pursued,
as we carry out in waking
some of what we have in dreams.

A luminous inner body
through which bitter nettles seep,
poised to enter
the sun-ruled world
and fall apart without end.

And then Ned Baeck's Wait spills out a quiet and tender bon mot like this:

At the centre of the changing world,
someone with a bag of groceries.

Baeck probably does that just to see the look on our faces.

Today's book of poetry thinks that Ned Baeck has arrived fully formed with a strong disposition.  These poems ripple ripe because Baeck knows how to burn.

Maybe to forestall
I go out, though it's already late
and the dark a wilderness.

Armed and drunk,
a fire burning on each shoulder.

Orange, blue and yellow vines
lick the sides of the head,
ears mold to the hissing
pressure of heat, pulse beats out
its duty to blood.

Flesh will be
laid to waste,
care will be
present.

All our actions tipping
into the grave before and after
us, chastening our claims, here and there
a face, an eddy in the stream, an important address
blending back to unreadable flow,
its brusque gait like a thief's.

Already we may have died,
talking decomposition,
although there may be
some kind of composure.
At least the dogsbody, empathy.

There is the limit
and the old growth within it:
degrees and features
at some level neutral, as people
say of weather.

But we die, stop arguing,
stop balancing,
we die
without consummating a wanted
or repulsive thing.

Until then we live it—the cavalcade
and neglected berths at the road-side,
shared with scarred and programmed
animals and images.
Many hard-won wounds
watched over by bacchanals and Samaritans.

Allotted to sniff out
and shrug off the panic,
eyes to rove for stragglers,
stammers of midday
in the ripening silence
so far behind
but still brought to attention
by the clarion call
of protean things.

So why do we think we can separate
our intent from the future, or metabolize
its gruel of almost and elsewhere?

We recoil from the given
as if it were the acid-burned face
of Pangaea, lissome
grandmother, ordinary girl
we have wanted, warred with,
and may even love.

Wait is unsettling, unnerving and totally necessary reading.  This is not poetry that will make you happy—but you will be engaged.

There are moments of tenderness and hope but you have to be looking for them.  Today's book of poetry was deeply moved reading Wait, when it grabs you, and it will, it gets in deep, right next to the bone.

I passed the hunched Knut Hamsun sick-man
in the middle of the crosswalk, red hand flashing—

he going south into the Punjabi village
and I going north, home, across
from the graveyard.

Most days, smoking, I see him from my balcony
overlooking the street—if not on the sidewalk—
scanning the ground for cigarette butts, unkempt
in ill-fitting clothes, the same too large pants
held up by hands in pockets,
grey-blue k-way jacket, colourless sneakers
rain or shine, winter, summer, slush or dust.

I wonder, did he flash
on mortality on morality
(testing victory truce and failure)
a lot and a long
until his mind detached—
undetermined,
undermined,
stopped finishing his dreams
and couldn't flesh it out.

People think the feeling
you'll die is much. It isn't.
It's not a question of dying,
the trouble is entering
an unroofed labyrinth,
the slight one, but not seeing
your way through.

In your mind a sandcastle
based in the imperishable,
no doubt loved,
being slowly, patiently
licked away—
repatriated—and you still in it
not formed again.


And not being able
to go
where you need
to go
with no other worldly concern
is hell, or at least anguished displacement.
Anyone can tell you that,
and the ingredients are still here.

The mixture of disequilibrium
and just a tiny spout of direct reality
is enough to throw a person.
You might think you're capable
of monstrosity and heroism at once
and long for neutrality like an adolescent
for adulthood, maybe he longs like that.

Or maybe he just wants Lethe,
and to sew up the wounds of memory,
walks without stopping.

Once I offered him a cigarette
and he accepted it reluctantly,
disappearing it into his shirt.
But I could tell I was interrupting
a conditioning pattern,
introducing another blip of potential,
a shipment of blood into ghost-hood,
the possibility of it all happening again.
I haven't done it since.

Today's book of poetry is trying to get back to normal operations but we fear we're going to be a little light on the ground for the near future.  Milo, our head tech, and Kathryn, our Jr. Editor, have vanished.  They left a short note that lacked any detail.  They will be made to pay for it.

In the meantime you might want to listen to Sir Tom of Waits, patron saint and holy warrior, start with his monstrously good "If I Have To Go."  Today's book of poetry is certain that will put you in the perfect space for Ned Baeck's Wait.  It's a trip worth taking.

ABOUT THE AUTHOR
Ned Baeck lives in Vancouver. His poems have recently appeared in The Continuist, Sewer Lid, Prism International, poemimage, untethered, and Ottawa Arts Review. Wait is his first full-length collection of poems.

BLURB
“Who, now that sadness is forbidden, dares weep, these poems pierce the psyche like spikes through our wooden heads.”
—Claudio Gaudio, author of the novel Texas