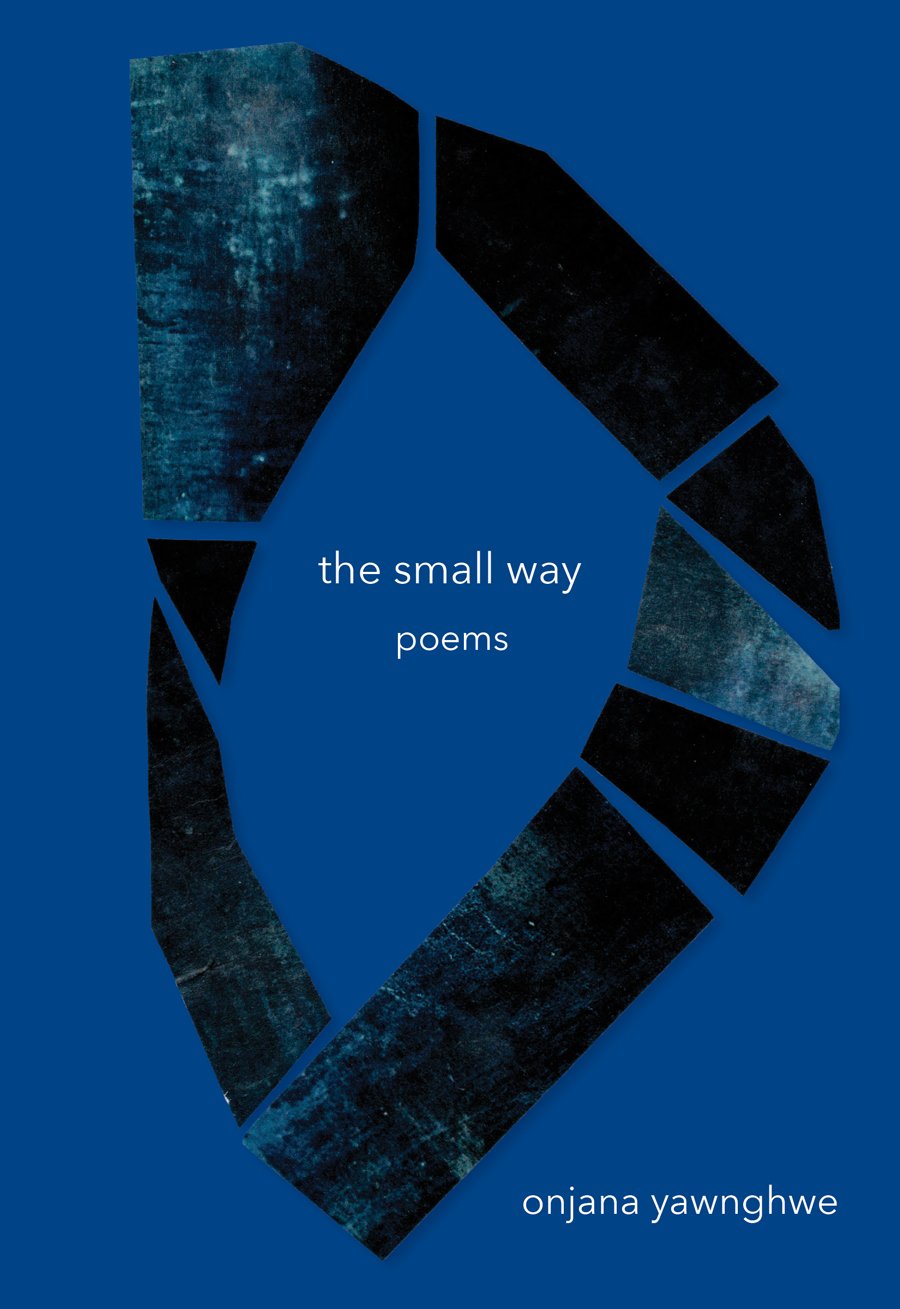 Many years ago, somewhere around 1984-1985, Today's book of poetry moved to Prince Edward Island and while there we had the honour of meeting a great Canadian artist named Erica Rutherford.  Erica was a former Eric, had been an artist with the original Goon Show with Peter Sellers and Dudley Moore, he had also been a filmmaker in South Africa. Eric had married, had children and then eventually Erica arrived.

When I met Erica she was with Gail, the same woman Eric had married when she was a man, all those many years ago.  When asked, and this is a badly remembered paraphrase, but when asked about the differences between being married to Eric and married to Erica, Gail replied "plumbing."

Onjana Yawnghwe's the small way tells a parallel love story of sorts and does it with a generous heart and a kindness of spirit.  Today's book of poetry applauds the story - but what we really care about is the poetry.  We care about whether or not these poems work.  Like clockwork.

I thought you'd tell me you were going to die, your face was so serious.
Or you'd fallen in love with another woman, to leave me behind.
These were my greatest fears.
Your face leaked shadows, spilling little light.
When you told me, I felt relief. An ocean crossed my eyes. I thought
you were brave, knowing this dark place you had come from and the
dangerous place you would be travelling to.

I wrapped my arms around you. You wept.
You were afraid I would cut you down and reject you.
But how could I reject the only person I have ever loved?

The land you were standing on was waterlogged and sinking.
You did not know what decisions to make, how you would be in the
world, if you would be transitioning or staying tight with this secret.

I wanted you free. I was impatient for you to decide your life, and thus mine.
This ache in the background. The world on its head. We were travelling
to the edges of the known universe, where no light would return.
Somehow, our story is ancient.
We were each other's shadow, each taking turns in the moonlight.

There were things to be done.
I swallowed it all with straining mouth, the doubts, the fears, the
unknown, questions of identity, sexuality, stars, satellites, black holes,
supernovas and all the rough cosmic debris.

These poems are inside of the gender politic, a woman and her husband, who is transitioning to her natural state as a woman, make for the story line.  Yawnghwe transverses all of it with a level of class this is both admirable and necessary.  Onjana Yawnghwe has deep questions about the nature of gender and desire.  Yawnghwe is a willing participant, a loving partner with her eyes on the future.  But when you start spinning out of your known universe and into the unknown uncharted territory of the future - things change.

One partner changes so much they can no longer find each other and the searing pain of that disassociation is searing.  White hot.  Yawnghwe indulges in no whining, nor much in the way of second guessing, these poems meet the events straight on, with respect and hope.  When Yawnghwe's partner moves on Onjana is left to pick up the pieces.  These are challenging and rewarding poems of crystal clear precision, haunting poignancy.

It was my choice
to end our marriage.

Something I couldn't imagine,
being attracted to women.
I saw you as a woman.

Only later did I realize
how you have fused into my heart
how by your mechanism it beats.

I thought it would always be so.
Everything was spinning, you see.
The earth was something to hold on to.

This conventional conception of self was familiar.
It had been hanging there like a dirty
dish towel, flapping in the breeze.
I took it up, raised it as flag.

It was my mistake to think I'd never lose you.
but love and time pick you up and shake
you loose into this new body.
All yours. All alone.
Reaching out.  Open arms.

How tender, tender, tender our fragile hearts are.  It's remarkable we've survived as a species at all.  the small way is an emotional roller-coaster, the most stereotypical and trite descriptive for an utterly unique, or at least decidedly rare in Canadian letters, glimpse into a relationship where gender and identity actually change in front of your eyes.  What was loved has vanished in plain sight of our eyes and no amount of love can change that.

You refuse to take our wedding picture,
the one with you smiling, embracing me
from behind, cherry blossoms in the distance.
Your mother had given it to us, framed.

Today you return the letters I wrote you,
the whole box of them, saying "It will help me move on."
Move from where to where, I wonder?

The day we were married
the sun lit the Japanese pond
and the trees were nearly
exhausted of pink blossoms.
It was April.

As much as the small way was a book of poetry that Today's book of poetry "poetry enjoyed", we weren't alone in being a little saddened by it all, the loss.  After our morning read our newest intern, Maggie, went and sat in the corner in one of our large reading chairs.  She surrounded herself with books from the stacks and sent out a cosmic "do not disturb" sign.  She also put Puddles Pity Party on the box.

ABOUT THE POET
Onjana Yawnghwe was born in Thailand but is from the Shan people in Burma (Myanmar). She grew up in Vancouver and received an MA in English from UBC. Her poems have been featured in numerous anthologies and journals, including The Best Canadian Poetry in English 2011, 4 Poets, CV2, Room, and The New Quarterly. Her first poetry book, Fragments, Desire, was published by Oolichan Books in 2017.

BLUBS
“Onjana Yawnghwe’s The Small Way is a book that has never before been written: poems of love & grief for a spouse’s transitions to becoming a woman within the continued cradle of support that art and empathy creates. From acknowledging the gentleness that was at the heart of the bond to dealing with the weariness that learning how to cope with another’s transformations brings, Yawnghwe’s poetry is searingly honest, steeped in lyrical resonances that attempt to effect and honour her own transition to a different kind of relationship with the person she once married, and with her own fragile, fierce self: still singing, ‘still, it shines.’”
—Catherine Owen, author of The Day of the Dead

“Yawnghwe rigorously examines how falling out of a lovers’ narrative is more shattering than falling out of love itself. Gender is dissected and disassembled as her spouse transitions, as is the very notion of intimacy itself. Eloquent. Startling original.”
—Betsy Warland, author of Oscar of Between

Deftly aphoristic, startlingly vivid and affecting, The Small Way breaks open the love poem and presents us with a vital story of change, loss and persistence. Each line resonates with the fundamental mystery of other lives, other bodies, other desires, yet the book is also suffused with indelible traces of connection. This is some of the finest writing on love in recent years.
—Warren Cariou, director of the Centre for Creative Writing and Oral Culture, University of                    Manitoba