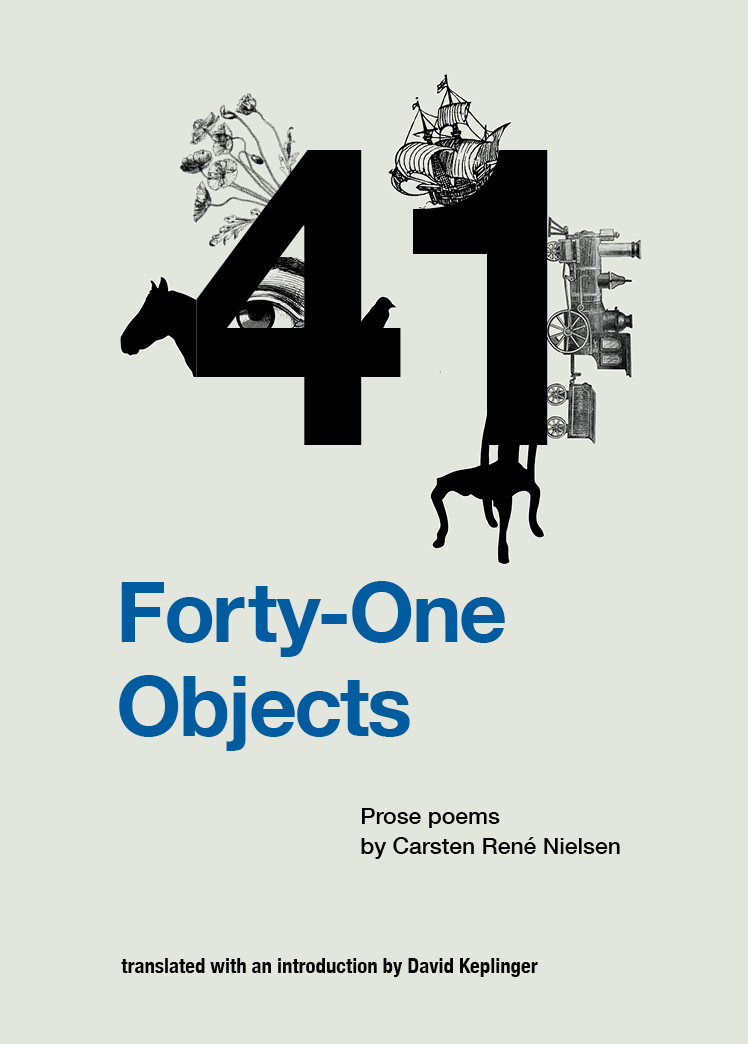 Forty-One Objects by the Danish poet Carsten René Nielsen, translated by David Keplinger, is one of those books that fills your poetry heart with pure poetry joy.  Nielsen writes poems that instantly made Today's book of poetry think of Stuart Ross's surrealist poetry.  Stuart Ross, recent winner of the 2019 Harbourfront Festival Prize, is Canada's premiere surrealist.

These poems, like Ross's, are filled to over-flowing with clever leaps of faith, secret wisdom about the inner workings of it all, genuine humour.  There is a constant flow of original thinking.  With many poets, good and the other kind, the reader often feels the lines and/or subject is one the reader already knows or expects.

I tried to write on the blackboard, but the chalk left no
trace. As if the board were made out of metal, or the chalk
were a rusty nail. Not that it mattered. My students were
sitting, as my students do, silently screaming with closed
eyes, their hands pressed against their ears. So quiet it was
in the room, one could hear the insects flying against the
large windows. Were my eyes two small suns, or was the sun
shining so brightly that summer that we were all lit up from
inside? I don't know. It is you who remembers this.

David Keplinger has done some superb work translating Carsten René Nielsen.  This past year Today's book of poetry spent considerable time and joyous effort in an attempt to translate Norway's
Dag T. Straumsvåg but with very little success.  Clearly Keplinger has tools Today's book of poetry doesn't.  These translations sound, feel and read as though were written in English first.  Keplinger has inhabited Nielsen words until they belong to them both.  With two cooks in the kitchen things can often go wrong, not these cats, they both know how to burn.

Forty-One Objects is excellent evidence of something Today's book of poetry has long believed.  The poetry world is endless and filled with remarkable voices.  As readers we have to take our hats off to small presses like The Bitter Oleander Press for bringing great voices from other languages within hearing range.

The youngest of the sisters, the loveliest one, was given a
jewelry box. If one tried to open it, it buzzed painfully in
one's fingers, and the hair on both head and body stood up.
After several attempts in vain, the girl ended up in the dog
basket, where she lay, peeing. "Just give her a cigar," said
Uncle, "I'm longing for Chinese girls, and we have to move
on!" And on we went, in the middle of the night, onwards
on the same bicycle to the dentist. A molar was found in
an oyster, and later a silver spoon among the instruments
in a drawer. "Milk teeth," laughed the dentist incessantly,
"Milk teeth," while unsteadily he pointed at my mouth.

Today's book of poetry is trying to get caught up on a big backlog.  Our intern Maggie has returned to the real world.  Kathryn and Milo are busy Kathryn and Miloing.  Max, our rarely seen and cranky Senior Editor, has been busy working on a personal project that seems to be coming along nicely.  The rest of us have been scraping ice off of the lane way and reading what comes in the mail.

Poets like Nielsen give Today's book of poetry optimism, hope.  Certain people just know how to burn, they are able to dance from birth.

Tired of listening to Tim Burton playing the guitar, Schubert
explaining how a person does his tax returns, and Joseph
Brodsky telling about his experiences as the new dogcatcher
in town, Jesus Christ - also known as "The Weasel"  - tunes
into a radio station where jazz is played. It's Mingus with
Goodbye Pork Pie Hat, at an elegy dedicated to Lester Young,
who wore such a hat. Jesus always confuses Prez with Buster
Keaton, but then again, his eyesight isn't what it used to be.
He has often thought about getting glasses but is afraid -
even with the crown of thorns - to be confused again with
John Lennon.

ABOUT THE POET
Carsten René Nielsen, born 1966, is a Danish poet and author of ten books of poetry and one book of flash fiction. His first book published in 1989 was awarded the Michael Strunge Poetry Prize. The prose poems Cirkler (Circles, 1998) won him critical acclaim throughout his native Denmark. Recent collections include the prose poems Enogfyrre dyr (Forty-One Animals, 2005), Husundersøgelser (House Inspections, 2008) and Enogfyrre ting (Forty-One Objects, 2017). He has won several fellowships from the Danish State Foundation for the Arts. In the United States two of his books in translation have been published: his selected prose poems, The World Cut Out with Crooked Scissors by New Issues in 2007, as well as the prose poems House Inspections, by BOA Editions in 2011, both books translated by David Keplinger. In 2014 a selection of Nielsen's poems was published by EDB Edizioni in Italy under the title 8 animali e 14 morti. He lives in Aarhus, the second largest city of Denmark.

ABOUT THE TRANSLATOR
David Keplinger is the author of five books of poetry including The Prayers of Others (2006), winner of the 2007 Colorado Book Award, and The Clearing (2005), both from New Issues Poetry & Prose, as well as The Rose Inside: Poems (Truman State University Press, 1999), chosen by Mary Oliver for the T.S. Eliot Prize of that press. He is the recipient of fellowships from the National Endowment for the Arts and the Pennsylvania Council on the Arts. He is also the author of World Cut with Crooked Scissors (New Issues, 2007), which he co-translated with Danish poet Carsten Rene Nielsen. Recent poems have appeared or are forthcoming in Prairie Schooner, Ploughshares, Florida Review, AGNI, Nimrod, and Minnesota Review. He currently teaches at American University in Washington, D.C.

DISCLAIMER
Poems cited here are assumed to be under copyright by the poet and/or publisher.  They are shown here for publicity and review purposes.  For any other kind of re-use of these poems, please contact the listed publishers for permission.
We here at TBOP are technically deficient and rely on our bashful Milo to fix everything.  We received notice from Google that we were using "cookies"
and that for our readers in Europe there had to be notification of the use of those "cookies.  Please be aware that TBOP may employ the use of some "cookies" (whatever they are) and you should take that into consideration.