Being a sixty-three year-old grumpy white man in Canada, Today's book of poetry is sadly unfamiliar with contemporary music.  Bird, Trane, Prez and so on, Billie, Sarah, these are the musicians I know.  Hip hop, as I've only very recently discovered, is rock n roll as much as any other.  But until I started to write this blog/review I had never heard of Frank Ocean or Christopher Edwin Cooksey, I certainly had never heard of Odd Future or listened to Channel Orange or Blond.  But after a first reading of Alan Chazaro's This Is Not A Frank Ocean Cover Album we figured we needed to hear Frank Ocean's acclaimed Blond.  Astounding.

Alan Chazaro's This Is Not A Frank Ocean Cover Album is like a slice of some new fruit, spicy, fragrant and tasty.  Alan Chazaro can cook.  So can Frank Ocean.

I say fuck
because it feels right
about now,
and I say love because
what wrong
could it bring?
I haven't shot a pistol
since my stepdad
flung his Desert Eagle
from the bedroom and took us
to burst freedom as kids.
The smell of sulfur
and devil, the pinch
of steel between my 10-
year-old finger. I didn't
seek this, was never good
at hitting body-
sized targets,
kept my eyes
shut while I curled
the trigger. It's heavier
than you think,
to hold and re-
lease thunder.
Not like the movies but
somehow like the movies.
Ears still ringing,
vibrations
in my bones.

Alan Chazaro is doing some singing of his own in This Is Not A Frank Ocean Cover Album.  But wouldn't you know it, he's also looking at colonialism, toxic masculinity and tenderness.  Chazaro is using a multi-coloured brush and painting broad strokes when he paints his landscapes.  And of course he paints in the detail so that it all fits.

Yes, Today's book of poetry uses metaphors like cooking, singing, painting, to describe poetry and we feel good about it.  And just in passing, our photo does not do it justice, the cover of This Is Not A Frank Ocean Cover Album is one of the very best we have seen in a long time.  Splendid.

Have you ever retraced the borders on a world
map with your abuela's lipstick? Post-

colonialism is a word that means re-hustle,
but should never be re-Tweeted. This isn't

a political statement. The states have been on fire
for as long as they have been stated. What happens

when GPS can no longer locate what you are
looking for? I'm talking cartography,

the fog-swallow of clouds, a wandering
mathematics. Since we've come a long way

from the art of papyrus. Since we've come for more
than your blood can script. Return to your proper

homes. This land is full of forsaken places
I've never visited. What is a sign if it only points to you

in one direction? How can you sleep with your eyes
open and an open road ahead of you?

cities. I mean this literally--how the lights raged
across both places. How I know the silence

of hands that can draw worlds and hands
that won't even try.

Today's book of poetry was listening to Frank Ocean this morning, but when we typing up this blog it was Billie Holiday, Miles Davis, that lot.  I don't think Mr. Chazaro would object.

The world is on fire and Alan Chazaro is pointing fingers.  This poetry takes place in a world Today's book of poetry has not spent much time in - so why is it so compelling?

Actually, this is where Frank Ocean really comes in to play, listening to Mr. Ocean it was easy to imagine Chazaro writing these poems.  The same casual elegance and a little embrace of the classic "fuck you."

That night our apartment was an armpit, testosterone
and sweat-washed as if Papi and his friends were the ones

entering the ring. When he let me sip his Heineken I knew
it was a big deal. I stumbled and hiccupped, imitating

Dumbo from the cartoon I'd loved. The men laughed, easily
entertained until Chávez appeared on screen. The Mexican

Warrior, they called him. Papi reminded me
how he had battled one hundred fighters, more

than Ali, or Tyson, or Dempsey. The De La Hoya
entered. Everyone booed, telling him to go back

to his locker like the traitor he was. The Mexicans
thought he was gringo and the gringos thought

he was Mexican. I should've smiled
with missing front teeth for The Golden Boy

in his mixed-up outfit, a combo
of US and Mexican flags, but I didn't, I don't

remember the actual fight, a flurry
of blurred punches and the card girls in bikinis. I wasn't sure

what took place until everyone on the couch started
grumbling, their movements a slow and beer-confused

disappointment. I swear someone must've cried. Chávez
was hunched over in his corner, right eye swollen

from repeated jabs to the brow, while De La Hoya
stood center, undefeated.

Poetry may be the uniter of worlds, Alan Chazaro was not considering the attention of an aging Canadian, his house surrounded by snow, when he wrote these fine poems.  A true poetry voice always has a clear sound and Chazaro cooks that up proper. 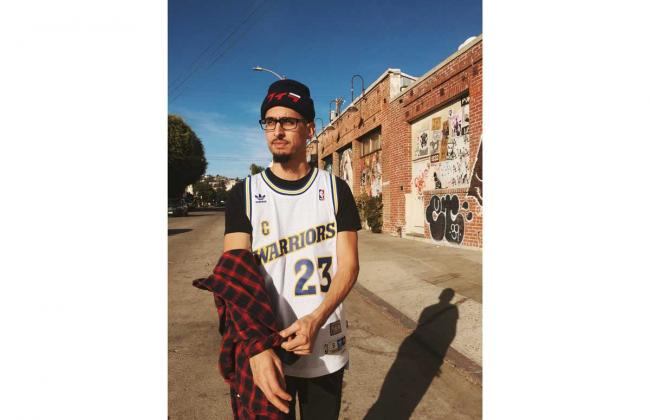 ABOUT THE POET
Alan Chazaro is a high school teacher at the Oakland School for the Arts, the former Lawrence Ferlinghetti Fellow at the University of San Francisco, and a June Jordan Poetry for the People alum at UC Berkeley. A Bay Area native, his poems have been featured in the San Francisco Chronicle, Puerto del Sol, Huizache, Acentos Review, and Ninth Letter. He is a recipient of an AWP Intro Journals Award and has been nominated for multiple Pushcart Prizes. His first poetry collection, THIS IS NOT A FRANK OCEAN COVER ALBUM
(Black Lawrence Press, 2019), was the winner of the 2018 Black River Chapbook Competition, and his second book, PIÑATA THEORY (Black Lawrence Press, 2019), was awarded the 2018 Hudson Prize.

BLURBS
"Listen: This book is so good it makes me want to curse. Better still: it makes me want to go write. Alan Chazaro's THIS IS NOT A FRANK OCEAN COVER ALBUM is full of neon imagery—a blunt passed around like 'just-born stars,' an apartment full of men watching boxing as an armpit. Chazaro's lyric is expansive; his music is tight. Nod your head & find yourself going back to each poem to trace its wisdom like a kid hitting rewind on a Walkman to hear their favorite punch line over and over. Chazaro's poems explore masculinity & machismo with tenderness, they define & redefine ideas of home, and they shout out the Bay Area with love & precision."

"Welcome to the blood hymn of the fast-moving body. In THIS IS NOT A FRANK OCEAN COVER ALBUM, debut poet, Alan Chazaro, breaks open—beautifully—the contemporary poetry landscape, crossing bridges, contemplating borders, and reckoning with the legacies of a rumbling boyhood. The voices here are tender, intellectual; hungry for desert wonder and midnight hoops, they wind their way through the ruins of Athens, the streets of Mexico City, and back to the yards and bars of Oakland. 'We are byproducts of earthquakes,' confesses the speaker; 'Do not look away.' A burning and beautiful achievement by a poet on the rise."
—Brynn Saito

"Alan Chazaro's THIS IS NOT A FRANK OCEAN COVER ALBUM challenges us to listen. To reckon with the troubling vibrations of diaspora and masculinity in the landscapes of a gentrifying America and postcolonial world. In these pages you'll find a poet who has done that listening, who has listened to himself, his loved ones, his community. Who knows 'there are streets that have retained the noises of ghosts,' and has found a way to remix those vibrations as a way of navigating the joys and perils of his world."
—Malcolm Friend

"THIS IS NOT A FRANK OCEAN COVER ALBUM is a full-throated song, a reclamation of language, history, and memory that resonates across time and space and generations. Here, the Bay Area is sentient and brimming with sound, possessing a body and blood of its own. Chazaro's language is pure electricity, revealing the sonic landscapes and silences that surround lineages, memories, and displacements. By alchemizing loss into light, these poems are both cosmic and deeply embodied. Chazaro rewrites masculinity and reckons with colonialism, all while guiding us toward the mythic possibilities of creation: 'how constellations are formed / from the darkness of our mouths.' Each poem contains a home within itself, a home that defies nation and gentrification, a home that can hold all of us. This collection is kaleidoscopic, alive with joy and mourning and defiance. With each singing line, it brings the future to us: 'One day, / let us all return to ourselves.'"
—Kristin Chang