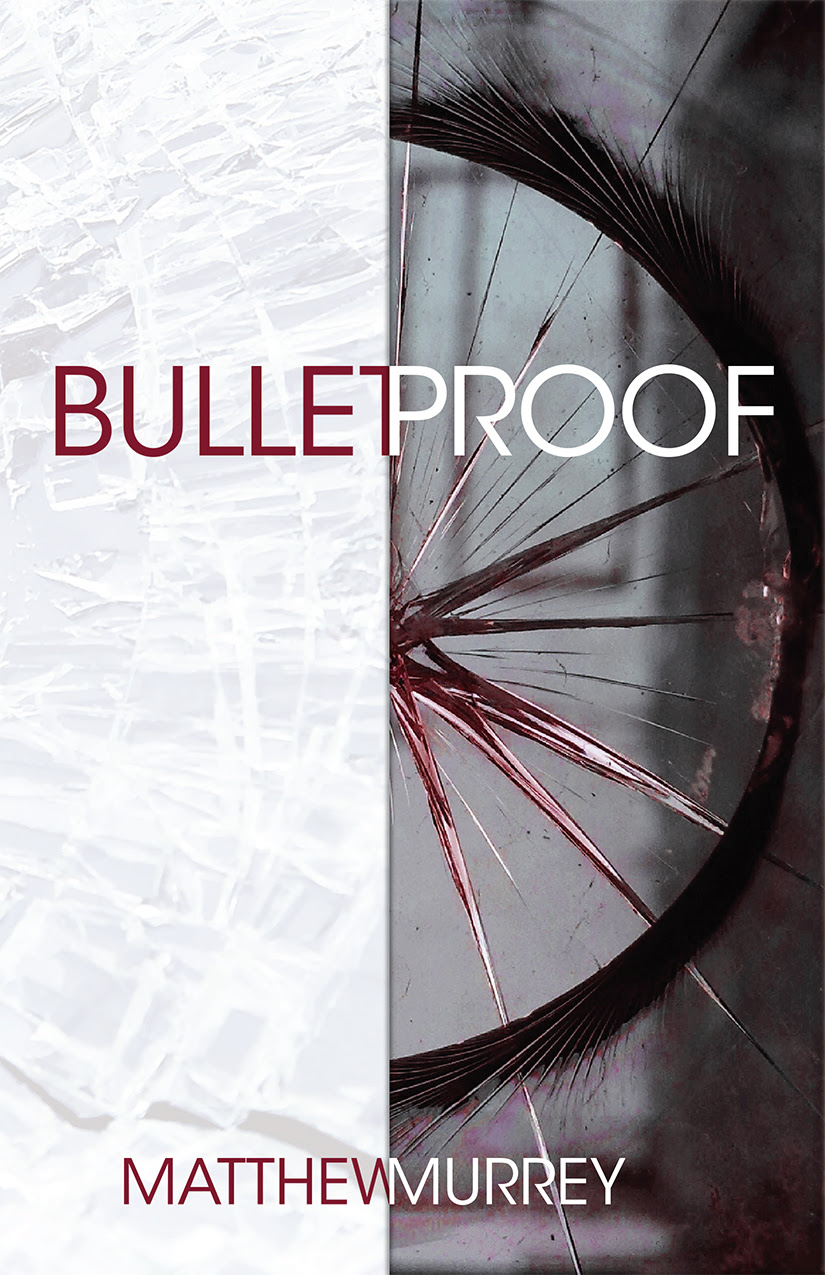 "Grim as a box of bullets."
Shadow of a Prayer

Matthew Murrey's Bulletproof "comes correct" as our dear friend Chef Duncan would say.  Almost every poem in Bulletproof has previously seen the light of day in an anthology or journal or magazine and so on, that's not easy to do.  When Today's book of poetry was a much younger poet that was the path; publish in small magazines and journals and then take that success to the bigger magazines and journals and so on.  Once you'd staked some ground there, in the grassroots, those poems became the manuscript you'd send on to a publisher, a book publisher.

Bulletproof is quietly intense poetry, Murrey is crystal clear all the time but that doesn't mean that he's constantly showing all of his cards.  Murrey's poems have vigor but they never swagger.

Fifteen stories above brake lights,
horns and clenched steering wheels,
keyboards are quiet, doors locked
and phones mute in their cradles.
I'm walking back to the elevators
with an envelope left in the hallway
for me--my final run of the day.
Half past five and I'm past ready
to be done, to go underground
for a noisy train, to join everyone
heading home for the night.
Then an elevator opens; two women
step off, pushing their metal carts
of buckets, mops, soap, and rags.
They're speaking a language I can't
place--Serbian or Ukrainian perhaps.
They nod to me, then one heads east,
one west, toward opposite ends of the hall.
Their conversation ends, cut off
by distance and the rattle
of their carts.  Last bit of work
in hand, I ride the elevator down,
thinking of those women--
how they smiled and talked
with each other; how one patted
the other's arm as they parted.
Also I'm imagining all the trashcans,
dusty tables, coffee stains, toilets
and dropped Kleenex--the tasks
they will bend and kneel to;
how they were separated;
how we are silenced.

Bulletproof is so down to earth genuine that the music might be missed for the terra firma, but Murrey doesn't roll that way.  What Murrey cooks has no fat, these lean poems vibrate with heart-music.  Bulletproof lives in the space of the common ground we all share and breathes common sense.  Odds are you poetry babies have lived one or more of Murrey's sharp narratives.  Matthew Murrey's heart is always available, but it might be behind a bulletproof vest.

At our morning read we heard all about the police action on our quiet street last night.  Today's book of poetry takes a small stack of poetry to bed most nights, usually before 9.  By 10:30 Today's book of poetry was dead to the world and to the arrests taking place in front of our offices.  Haven't heard any of the details but simply because of the proximity - this sort of information alone can raise your blood pressure, make the hair on your arms vibrate.  Matthew Murrey's Bulletproof does the same beautifully damned thing.

All the breaks
you'll never know.  Red light
that kept you from being
broadsided and brain-damaged
just three blocks further on.
The thief who would've broken
in and waited under your bed
with a gun, got killed
when he was only ten, a freak
accident that broke his neck.

The thunderstorm bruising
the horizon would've been my last,
but I was on the couch, too sick
to get up and check the car windows
when the pelting rain started
and the tree limb fell, busting
the sidewalk and burying
its splintered end deep in dirt.

What doesn't happen, doesn't
hurt--hurtles by like a city block-sized
mountain of rock silently shooting
past the earth, whizzes by unseen
like a stray bullet, like germs in a sneeze.

Another year of drinking that water
and the doctor would've said,
"I hate to break this to you."
Good thing the phone rang.
Good thing they took a wrong turn.
I'm so glad you came early.  Oh,
and that mosquito you just slapped,
that was the one.  Lucky you.

Murrey shares the contradictions we endure in our every day walk through it all.  Bulletproof isn't in the business of offering solutions.  These poems give poignant consideration to where the rubber meets the road.

That's what my father did: killed
the engine, went back in the house,
opened the drawer by the bed,
and picked up the loaded thirty-eight.

He'd been backing the SUV down
the driveway when he ran over Foma
who'd lived with my sister for ten years
before she moved to Rochester.

I'm not sure if it took two shots, or just one,
but if cats could talk, Foma would have
thanked him for not letting her writhe and yowl
with her crushed pelvis for the last hours

of her fifteen years in Jacksonville,
which had been pretty good up until that moment
when she didn't see or hear the Dodge Ramcharger,
and my father didn't see her in the wide mirror
at his elbow.  They both were getting old.

Today's book of poetry wants to send out all our best wishes to all you poetry babies as the world braces for the COVID - 19 pandemic.  What an excellent opportunity to read more poetry.  If there is hoarding to be done, make it books of poetry, fill your shelves.

And if you're buying poetry nothing could be more prescient than the honest beauty and big hearted Matthew Murrey and his Bulletproof.  Murrey's poems are splendid common sense rendered lyrical.

ABOUT THE POET
Matthew Murrey was born and raised in Jacksonville, Florida, graduated from Stetson University in Deland, Florida, and then moved to Chicago in 1984. In Chicago he lived at a Catholic Worker house for a year, worked as a dishwasher, cook, bike messenger, and residential assistant - and met his partner. They moved to Iowa City in 1986 where he completed a graduate degree in education before returning to Chicago. Back in the city, he worked as a bus driver for a mental health center and - in 1992 - moved to Urbana where he was a mental health counselor for almost 8 years. In 2000 he enrolled at the University of Illinois and completed a library degree; he is now a public school librarian in Urbana. Murrey and his partner have two grown sons.

BLURB
“A generous range of thought-worthy subjects, approached with simplicity, wisdom, and a deft use of language.”