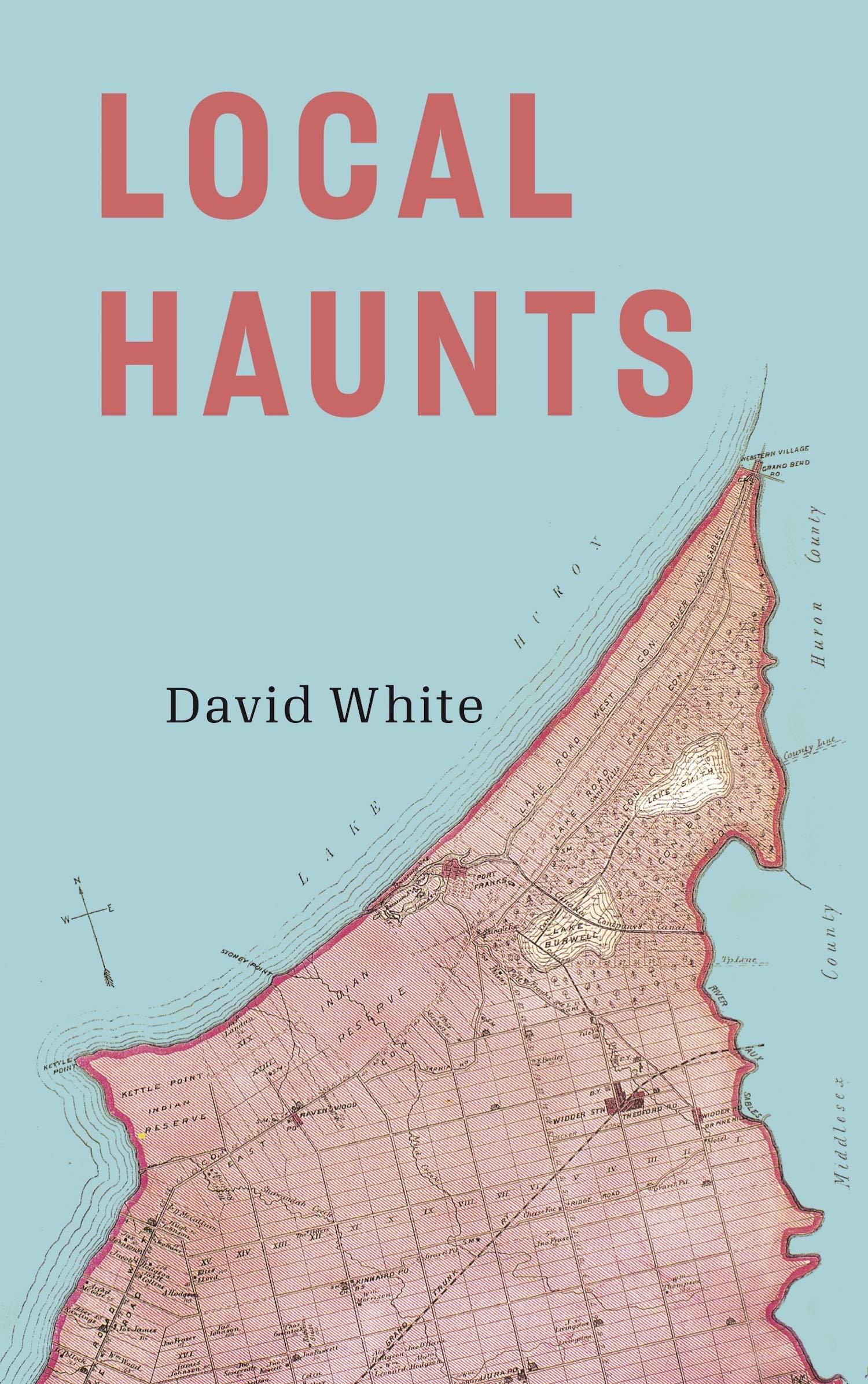 There is all the sad glamour you are every going to need in the first section of David White's Local Haunts.  The first section of this book, titled "Port Franks, Looking Towards Kettle Point" makes poetry out of distressing and disturbing childhood travesties.  There is an electric current running underneath this section, when you are reading Local Haunts you can feel it hum.

In White's poems coming of age comes at a cost.  Some of these poems hit the reader like a punch and others like a weep.  Either way that hum keeps you plugged in.

For Today's book of poetry there is some common ground between David White and myself.  The first section of Local Haunts reflect some of White's experience growing up in and around London, Ontario and having a father in the military.  Many of White's locations are familiar to my childhood self.  My father was a member of the RCR (Royal Canadian Regiment) and stationed in London, where I was born just two short years after Mr. White.  Today's book of poetry was born at St. Joseph's Hospital, London, Ontario.  I have memories of Wolseley Barracks.  Apparently my misbehaviour was a factor in the formation of rules about children watching movies on the base.  Enduring the beach at Iperwash was a regular happening in my family, I enjoyed it about as much as Mr. White, so not much at all.  Although our complaints were somewhat different.

Dragged out of the bathtub, held there
naked, dripping, suspended in my Daddy's grip
before the full-length mirror,
six years old, skin and bone,
bruises all on display,
scrawny genitals shriveled up,
while he wails away beyond words:

David White is gay, but Today's book of poetry would never mention such a thing unless it was relevant to the poetry.  In the remaining two-thirds of Local Haunts much of his poetry concerns his journey in a world that can still be frightfully hostile.  Yet for Today's book of poetry there enough moments of splendid joy, optimism and celebration in Local Haunts, to entice all you poetry babies.  White's community, like all others, looking for love and happiness, and rightly so.

The second and third chapters/elements of Local Haunts share and revel in the experience of searching for and sharing love.  Entirely admirable end game plan.

hobbling with a cane
past Kingsmill's Department Store.

That was out of character, but soon,
too soon, he was dying of AIDS.

on the lawns of Eldon House
his--suited, for the party--

flared as his glance
irresistibly engaged,

his smile impeccable
through the extended evening blue.

I revelled in the musk
of his event horizon,

amidst all the dainty
Eldon House Garden Partiers,

those ends of June when Chris,
Museum Director,

rounded up all his friends
and, unbeknownst to the Board,

surreptitiously put on the biggest
"A-List" Gay party in town.

as the dusk embraced
then erased their dreams.

There are so many fine and precise moments in Local Haunts, whether White is in a happy poem or a sad one, his constant attention leaves the attentive reader with that little jaw drop moment with expedient frequency.

Today's book of poetry will return to David White's excellent Local Haunts in a moment.  We wanted to report that our readership just surpassed 800,000 and we're pretty excited about that here in our offices.  Our new intern, Tomas, surprised us with a cake, eight candles on top.  It was a great way to start the day.  The cake, vanilla with vanilla icing, side of whipped cream, was delightful.  That's the good news.

Our good friend Michael Hewko died last week.  If you knew about Hewko you knew he was simply the best at what he did.  But it is unlikely you ever heard of Michael.  He was the genuine curmudgeon.  K and I have artwork by Michael Hewko in several rooms of our house, he painted all the walls, built all the bookcases in my study and the permanent ones in the rest of our house, he designed and built our bathroom, and he was my curmudgeonly old friend.  The very first art I ever bought was from Michael Hewko.  It hangs in our bedroom.  Oh yes, he designed and built a sliding shelf that fits over our bed, built it out of old doors.  The man was a certain type of genius and those of us who loved him now have that big hole where he used to grumble.

Death is coming to us all, no doubt about that shit.  And my sadness is certainly no worse than yours.  But this particular double hit, following a year of funerals and grief, was simply staggering.  Today's book of poetry is looking forward to getting back on track, yesterday's surprising Ottawa sun storm of delight was a good step.

Reading David White's Local Haunts is exactly the poetry kick in the ass that Today's book of poetry wanted/needed to get our train back on the tracks.  Here's some more:

It was never easy being a homosexual.
-Stephen Sondheim

and it's almost as if I'm cruising Mannahatta,
arm in arm with Walt Whitman,
searching every passing eye
for resonant desire,

searching for the one
I could cling to,
electric, adhesive,
spontaneous genital combustion,

and it's almost as if I'm holding
Hart Crane's hand,
to keep him from leaping
from the ocean liner's deck

into the Gulf of Mexico.
"Goodbye. Goodbye, everybody," he cries,
and the ship sails on towards
the desolation of America,

of yet another grasping, greedy,
hypocritical, evangelical,
insincere abomination
of Capital,

and it's almost as if I'm standing
beside Marsha P. Johnson
outside the Stonewall Inn
those early morning hours.

June 28, 1969, grieving
the death of Judy Garland and shouting
"Gay Power!"
before a billy club strikes her head,

handcuffs encircle her wrists,
and it's almost as if I'm demonstrating
with ACT UP
at the AIDS Conference in Montreal

I was there,
chanting, carrying my placard),
and my body's hanging,
broken, in Wyoming

on the fence beside Matthew Shepard,
October 12th, 1998,
pistol-whipped face
a red sea of blood

except where tears
river down his dying cheeks:
he was finally, October 26, 2018,
twenty years after his death,

laid to rest in Washington
Cathedral, and I'm attending
the marriage of friends
who've been living together for decades

but only now can legally seal their bonds
and live the dream they've held on to
all these unacknowledged years,
and I'm maintaining vigilance

against the rising tide
of far-right ignorance
seeking once again
to repeal our future.

All of you poetry babies, thank you so much for 800,000 hits, Today's book of poetry certainly appreciates it.  We would like to thank each and every one of you personally.  In lieu of that we will continue to bring you quality poetry at just the right price.

If you would like to interact with Today's book of poetry we are sending out a challenge:  send us your favourite book of poetry you don't think we have in the stacks.  Best entry will receive two Crying Charlies and one night's stay in the Stuart Ross Guest + Reading Room, transportation not included.

ABOUT THE POET
David White was a participant in Renga: a collaborative poem (Brick Books, 1980).  In 1994, in completion of his Ph.D., he wrote A Territory Not Yet On The Map: Relocating Gay Aestheticism In The Age Of AIDS.  His first solo collection of poems is The Lark Ascending (Pedlar Press, 2017).  Local Haunts is his second collection.  For many years he taught Theatre History and Writing at Fanshawe College.  He lives in London, Ontario.