A Scripture of Crows - Charles Goodrich 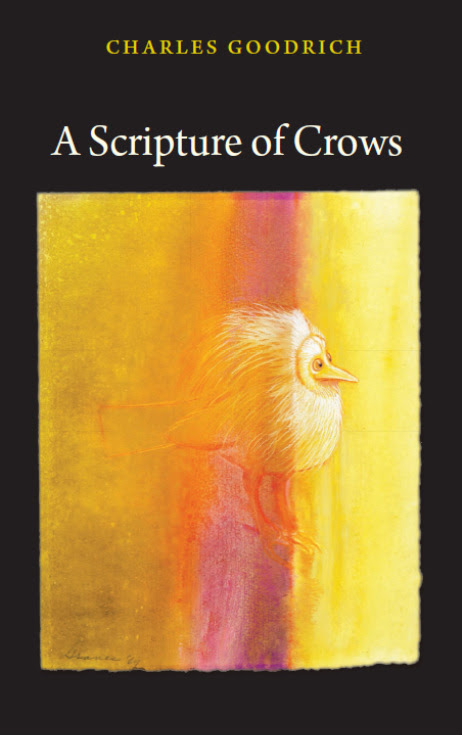 Maybe it is my age, because I suspect I am close in age to Mr. Goodrich.

It might be that I'm partial to the straight ahead, no nonsense narrative voice.

My argument is going to be that Charles Goodrich's A Scripture of Crows is an exceptional book of poems because — I found myself nodding in agreement on each and every page.

Few seeds as tenacious as burdock,
clutching the dog's fur
tight as ticks. Burdock leaves
aren't as plush as mullein,
but they'll pass for kleenex in a pinch.

We haven't tried digging it up,
roasting the roots in an open pit,
then grinding them together with berries and fat
for pemmican yet,

but I own a sharp spade.
I'm not afraid to eat
woody things or bitter things,
or creatures that wiggle or squeal.

When I pull the burrs out of her fur,
the dog eats them.

Goodrich calls himself a 'commonist' which is clever stuff and a word I intend to start using.  And he is right, his unadorned, pared down poetry reads like a book you already know, a familiar.

the man's strict love
of the physical world
inhabits this wood
and six years after his death
it still hurts to burn it
...

I've copied the blurb that accompanied the video below and it contains all the details about Goodrich that you need to know.

What I want to tell you is the joy I had reading these almost perfect poems.

With her head under the lid
of my hopeless spinet,
her voice comes out
minor-chorded—I am sick
of tuning pianos. I need travel.
I need romance!

Now she rifles through her toolbox
for a chisel, and she jabs it
toward my chest, Don't you ever
waste a minute, bones clicking
in her slender wrists. She's angry,
but more important she's

fifty
and broke
and her recently electric
love life's fizzling. On her knees
oiling the pedals, I need to do something
hard, her imperious
soul talking, spurring on
the slim, bursitic girl.

Too poor
to revisit Greece,
she's been talking with the Peace Corps
about Albania. If I wanted a serious challenge
I'd go home to Raleigh
and take care of my parents.

Dashing off a few quick scales, That's it!
That's all I can do. This piano
should be taken outside
and shot. With a cackling laugh
she bends to the keyboard, dark hair
falling over her face, and bangs out
a dirge.

I dreamed last night
I was on the beach
with a chain-smoking Greek.
He played the bouzouki
and I danced with the edge of the surf.

Charles Goodrich's A Scripture of Crows has me utterly convinced.  These are poems worth knowing.

Director of the Spring Creek Project for Ideas, Nature, and the Written Word at Oregon State University, Charles Goodrich discusses his latest work, "A Scripture of Crows" published by Silverfish Review Press, 2013.

"Charles Goodrich here writes a manifesto for world change one compact epiphany at a time. Administrator of local discoveries, he names himself a 'commonist,' loyal to the local, to the democracy of creatures, to the light, keen blade of the language opening the envelope of our sleep. 'The stars are rising like bubbles / in dark ale / The blood you gave to mosquito is what makes the bluebird / so blue. Feeling as the maple tree / must feel on the verge / of leafing out.' And reading, you are at eye-level with bud and dew, with seeds delving down, near joy despite the scheduled anguish of the modern world. These poems are a restorative in their deft humor and quiet promise. They will change your days, if not your life." —Kim Stafford

Charles Goodrich is the author three volumes of poems—A SCRIPTURE OF CROWS (Silverfish Review Press, 2013), GOING TO SEED: DISPATCHES FROM THE GARDEN (Silverfish Review Press, 2010) and INSECTS OF SOUTH CORVALLIS (Cloudbank Books, 2003)—and a collection of essays about nature, parenting, and building his own house, The Practice of Home (Lyons Press, 2004). His poems and essays have appeared in Orion, The Sun, Open Spaces, Willow Springs, Zyzzyva and many other magazines. A number of his poems have been read by Garrison Keillor on his National Public Radio Program The Writer's Almanac.