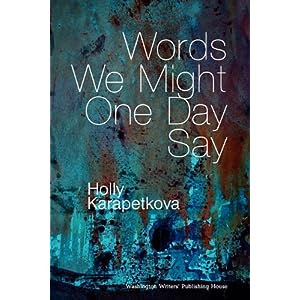 Holly Karapetkova has one foot in Bulgaria and the other firmly dug into American soil, her head is somewhere in between, beautifully above us all, in the clouds.  How lucky for us.  Words We Might One Day Say is a simply sublime book of poetry.

These poems are a unique hybrid of ultra-realism, magic-realism, political manifesto, romantic ballad, surrealist fancy — Karapetkova has it all going on in these engaging, insightful and explosive poems.  And how bleeding delightful is that.

I am only nine. Already
I have seen a dog with no hair
its body covered in sores
and the vultures circling.

I have seen the streets
stained red with cherries
spilled from the trees,
blackened against the asphalt.

I have seen my own home
turned inside-out, its contents
littering the sidewalk
like the vomit
of some bearded drunk:
sofa, chairs, bookshelves
with the books scattered
open and waiting,

my own smaller bed,
a light rain settling
on the pale yellow sheets,
the pillow ripped open
by a policeman
who thought it might be fun
to do a little damage,
break a few dishes.

The white feathers drift
like cigarette smoke
through the neighborhood.
I chase after them
trying to catch them in my fingers,
trying to push them back
into the open tear.

Karapetkova lives in the United States but her European/Bulgarian self is never far from these poems.  Karapetkova reads like legendary writer you just haven't heard of yet.

My list of essential poems from this volume started on the first page and didn't stop.

The stainless silver tables
cement floor with its hoses and drains.
No one likes a mess.

I say cadaver. I see body,
a tattoo of a foreign word on her left ankle,
six piercings in her ear
(the earrings have been removed).

We cut against the muscles, forcing our way
through the vast forests of bronchioles,
the cave of a heart, stiff and thick as a tire.
Try to sort out the thin tubes
of her ovaries and all her unborn children.

Did she spend her nights alone?
Share a small apartment with a man who took
her earlobe and all its metal into his mouth?
With a woman whose tongue covered
the sign on her ankles like a blanket?

I trace its outline into my notes
and look it up later. It's Chinese.
It means home, the body, a foot in the door,
a fist in the mouth, the long slow sex after lunch.
But she no longer needs the lie:

cadaver, an empty house and all its furnishings
left behind for us to rumble through,
plunging our scalpels deeper
than her lovers ever dared.

These poems have a tart sweetness to them and then the hammer blow of the world unexpectedly revealed.  Karapetkova has that keen eye that is at home in two countries, familiar enough to look into those chasms that exist on the border between the two cultures.  What Karapetkova finds in those spaces is beautiful and haunting.

I stood beside the hole, looked up at him,
waited. At Grandma's funeral he'd cried
but now his eyes just stared, detached and dim,
and soon the dirt flung was enough to hide
the lifeless form. The early evening shadows
defined his wrinkles, and I saw the sweat
drip off of his clenched jaw, but only God knows
what he whispered through his cigarette.
I heard that after Grandma died, his dog ate
with him at the table; he read her all Scott's
novels, and later, my mother would relate
how he'd kept the dog alive with morphine shots
as though he knew he could not go on alone—
the hole I stood by six months later was his own.

Holly Karapetkova's Words We Might One Day Say is remarkably good poetry, these poems are endlessly entertaining, emotionally gripping and entirely magical.

Words We Might One Day Say won the Washington Writers' Publishing House Poetry Prize.  Karapetkova is also the author of more than 20 children's books.

Tomorrow,  I will build a universe
of ink and write you subject to my pen,
controlling all you do and think in verse
and changing every loss of mine to win;
for instance, I could start with adjectives,
crossing out the old that I've become,
replacing dull with lovely, or I'd give
your careless words a turn to grateful ones.
And then for nouns—inscribe your apathy
as care with but a movement of my wrist,
to trade distaste for passion, transform me
into she, and thus by you as her be kissed.
Or better than this wordy love re-retrieving
I'll simply stop all verbs, keep you from leaving.

Holly Karapetkova's totally refreshing Words We Might One Day Say is as promising as spring.


www.washingtonwriters.org
Posted by Today's book of poetry at 10:05 AM