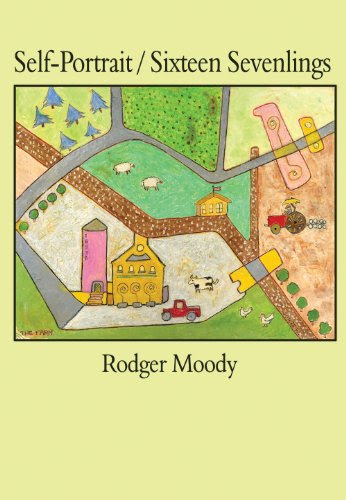 You could call these Sevenlings formal, Rodger Moody certainly sticks to his formula in this all too brief book of poems, Self-Portrait/Sixteen Sevenlings.  Sevenlings are seven line poems, two three-line stanzas and a closer.  I wouldn't go so far as to call the closers' punchlines but humour is certainly a device Moody is happy to employ.

Sevenling (He longed for)

He longed for three things about farm
life: the morning rooster, good compost
in the garden, corncobs glowing in the fireplace.

He had no use for strangers
selling Bibles, children who refused
to weed the garden, well-meaning neighbors.

The countryside belongs to the swallows.

There is a tangible clarity to Rodger Moody's seven line precision.  Each of these short poems contains its' own small universe.

My earlier mention of humour shouldn't mislead the reader.  These are poignant vignettes.

Michael McGriff says of  Self-Portrait/Sixteen Sevenlings:
These "Sevenlings" are for those who have drifted off a work only to be yanked
back to a seemingly causeless reality (He remembers the job wasn't to last...), and
for those who keep a copy of Yannis Ritsos' Selected Poems in the glovebox for
their fifteen-minute break, and for those who find meaning and redemption in an
art that's not afraid to place its bets on ardor and the deceptively plain spoken.

Sevenling (What of all the dreary)

What of all the dreary years slogging
the warehouse floor, the patchy plywood,
the com-
puter and the withholding technician.

The tender girl who stocks the reach-in
cooler, her songs and libidinous dance
when we are along, the existential disconnect.

Chet Baker on the radio softly following a
sad song.

There is a delicious melancholy in these poems.

Moody has made his living for the last twenty-four years as a warehouse worker.  An honourable enough profession, I've worked in a few warehouses, I know Bukowski did.  But Moody is also the founding editor of Silverfish Review Press, his poetry has appearing in numerous magazines and journals, he has had writing fellowships at the Fine Arts Work Center in Provincetown, Massachusetts.  Moody was also the recipient of the 2012 C. Hamilton Bailey Fellowship in Poetry from Literary Arts in Portland, Oregon.

The dirty warehouse is cold
this morning. He's wet from the rainy
bike ride against traffic. He wants breakfast.

Shrink-wrapped pallets hug the wall
against the alleyway. He hates counting
returns. The hand truck's unfailing

flat tire. He remember the job wasn't to last.

So the warehouse worker IS an accomplished poet, one read of Self-Portrait/Sixteen Sevenlings makes that clear.  Moody is deceptive with his easily approachable, casual tone but it disguises a deeper understanding and a willingness to reveal.

Self-Portrait/Sixteen Sevenlings is a short but absolutely fulfilling read that will fill that poetry fix.